The Meaning of Orbán’s Reelection in Hungary

While Viktor Orbán’s Hungary will continue to represent a fulcrum for the most reactionary forces in Europe, the situation holds contradictions for the Hungarian regime — and for the entire European Union. 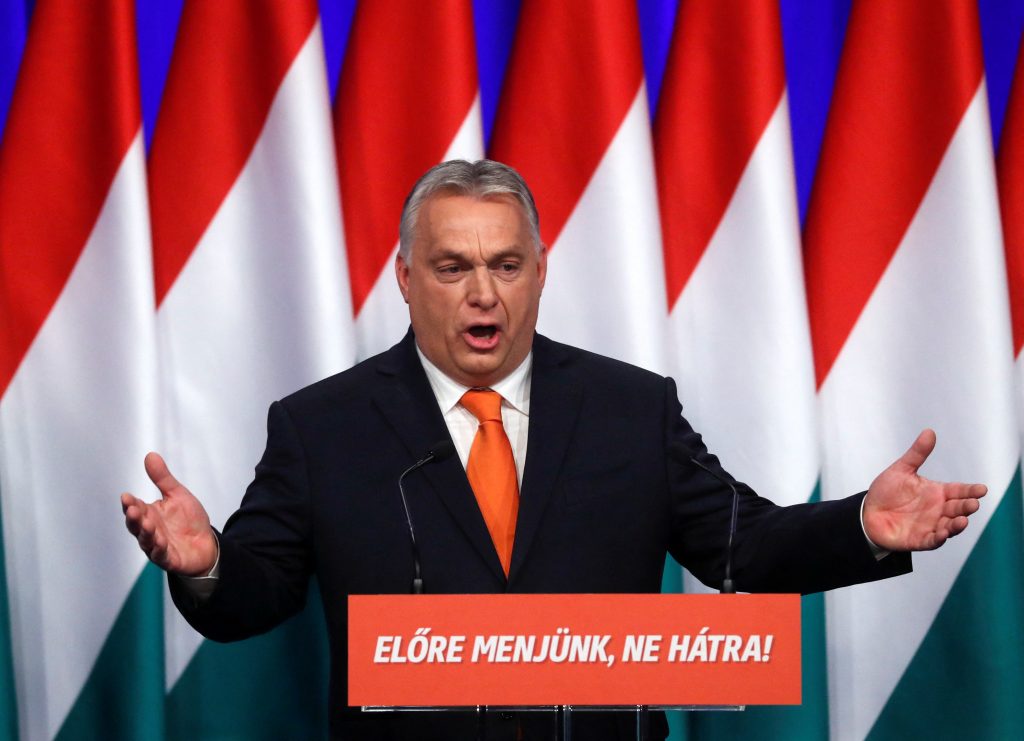 Viktor Orbán has managed to win reelection for the third time in a row and secure an absolute majority in the Hungarian parliament. His party, Fidesz, has thus secured a fourth term in office since it came to power in 2010. It won 53.7 percent of the vote and 135 of the 199 seats in the parliament; by contrast, the “United for Hungary” opposition coalition of six parties won 34.4 percent and 56 seats, and the far-right party Our Homeland managed to win seven seats. The latter is a right-wing breakaway from Jobbik, a xenophobic far-right party that has been moving to the center for several years.

Some analysts see this as Orbán’s most important electoral victory since first coming to power, given the current political context. First, he was facing this coalition of six parties ranging from Jobbik to the environmentalists, social liberals, and dissidents from his own party. Second, the war in Ukraine complicated Orbán’s position, given the good relationship he has with Russian president Vladimir Putin. And third, there was pressure regarding “respect for the rule of law” from the European Union, which feels strengthened by the unity it has regained in the face of Russia’s invasion of Ukraine. Given that context, it was by no means certain that Orbán would succeed in winning a parliamentary super-majority once again — but he did.

Many questions, however, remain about the government’s future.

Talk of Hungary’s “autocratic danger” — hypocritical though it may be (see below) — has been increasing in the European press. That said, Fidesz and its capitalist backers do genuinely control practically all Hungarian state institutions and the media. The successive constitutional and institutional reforms that the party has carried out since 2010 have allowed Orbán to create a tailor-made electoral and political system, leaving very little chance for his rivals, including other bourgeois parties. But beyond the electoral issue, the Hungarian political system has become one of the contemporary examples of a certain type of Bonapartism in which the government adopts a position of “referee” above the social classes to better guarantee the interests of the capitalist class as a whole. This describes the figure of Viktor Orbán.

Orbán’s tight control of the institutions and the media landscape is combined with cronyism that ensures his strong support from certain layers of the working classes. As Zsuzsanna Szelényi, a researcher and former member of the Hungarian parliament, explains:

Fidesz were exceptionally good at mobilizing their vote in rural areas. In the poorest Eastern regions, Fidesz gained 93 percent of the vote. Typically, these people tend to consume most of their politics from government-dominated public media. In these poor villages, home to many Roma voters, much of the population work in the state’s welfare programmes and are highly dependent for income on local mayors who rallied behind Fidesz.

But Fidesz’s control of the political and institutional life of the country does not explain everything. The bourgeois-liberal opposition has undoubtedly failed to respond to the concerns of a very large part of the electorate, beginning with the poorest and the workers. Indeed, a large part of the Hungarian population identifies Orbán with a certain stability, economic prosperity, and national pride. The liberal opposition does not offer economic policies that differ much from those of Orbán, and it also advocates a stronger alignment with the policies of the EU’s major powers. Many Hungarians likely view that with suspicion.

The entire regime that Orbán sits upon, though, could be overturned were the international economic situation to change drastically, directly affecting the countries of the capitalist periphery such as Hungary. In that case, social and economic discontent could combine with some expressions of class struggle (which the country has experienced sporadically in recent years). Given Fidesz’s tight control of institutional channels, that could encourage extra-parliamentary forms of protest — something Orbán and his government are aware of, especially at a time when the war in Ukraine and economic sanctions against Russia are disrupting the international economy.

Hungary and the War in Ukraine

The war in Ukraine has become, in Hungary as in many European countries, a hot topic in national politics. The issue made its way into the election campaign as well. And it has put Orbán in a difficult situation. Indeed, the Hungarian prime minister has long maintained very good relations with the Russian president as well as with China. It is a way for him to increase his number of international partners while at the same time strengthening the balance of power he has with Brussels.

Leaders like Orbán, however, are facing increased pressure as a result of the broad anti-Russian front among the main imperialist powers of the EU and NATO since the Russian invasion of Ukraine. He has supported the EU’s sanctions policy since 2014, but has blocked the transport of weapons through Hungarian territory to the Kyiv regime. Orbán’s objective is to defend a kind of Hungarian “neutrality” in the conflict. The New Statesman explains it this way:

While his pro-Putin position has made him a pariah within the EU, where even his illiberal Polish partners the Law and Justice (PiS) party have denounced him, most Hungarian voters have received a steady diet of pro-Russian propaganda from the Hungarian media, arguing that Orbán is protecting Hungarians by keeping the country out of a war supported by the opposition.

Of course, politics alone do not explain Orbán’s position; there are also economic interests at play. For example, Russia supplies 90 percent of the gas and 65 percent of the oil consumed in Hungary. However, this situation also points to the limits of the Orbán government’s “rebellious” policy toward Brussels. As the Financial Times put it:

For years Orbán has often used what has been called his “peacock dance” to push disputes with allies before making tactical retreats. While he has chided Kyiv — with which Budapest has a long-running dispute over ethnic Hungarians in Ukraine — and declines to attack Russia as harshly as western colleagues, he has consistently voted with the EU on sanctions.

But Putin’s invasion of Ukraine has made Orbán’s friendly rhetoric on Russia, and defiance of the west, less tenable. In particular, the war is driving a wedge between Hungary and Poland, which has been a close ally in EU affairs but is deeply hostile to Moscow. …

But analysts expect the EU to treat Orbán differently from Poland, which has grown closer to Brussels with its resolve during the invasion and its welcome for more than 2mn refugees.

In other words, the European unity that has been regained as a result of the war in Ukraine is being used by Brussels (i.e., the main European imperialist powers) to discipline the EU’s “impudent children.” The Polish government has not become “democratic”; it is just more clearly aligned with EU and NATO policy. The longer the war goes on and the situation in Ukraine deteriorates, the greater the pressure Orbán will feel to align himself with the EU against Russia. This policy of pressure, though, could also work against the unity of the EU, especially if Russia manages to make some gains on the ground. That would give the Hungarian government confidence to threaten to obstruct European decisions.

Despite all the talk of Hungarian “autocracy,” the Hungarian government is a loyal collaborator with the big European capitalists and imperialist governments. It has already demonstrated this at a most critical moment — when in 2015 refugees arrived in Europe as a huge wave. Hungary played a central role in controlling the migration flows by closing its borders to the passage of refugees from the Middle East to Germany and other central EU countries. Hungary is also where large German multinationals, especially in the automotive sector, make huge profits thanks to low wages and the overexploitation of the Hungarian working class. In other words, Orbán’s government tries to keep some room for itself to maneuver against the European imperialists, but it remains a faithful defender of the interests of the national capitalist class as well as of the “friendly imperialists.”

Thus, Viktor Orbán’s reelection represents a point of support for the most reactionary political currents in Europe, as is evidenced from the regular visits leaders of the French Far Right make to the country. At the same time, Fidesz’s new mandate has come in a changed world. International political and economic conditions are changing rapidly and could pose threats to Hungary’s political, economic, and social stability. It remains to be seen whether the Hungarian working class and poor will be able to play a central role in challenging this reactionary government, or whether other reactionary forces will do so.

First published in French on April 7 in Révolution Permanente.