The Mexican Revolution and the United States

Mexican workers in the US made up a combative and radicalised community with an admirable tradition of militant activity and strong links to the Mexican Revolution. 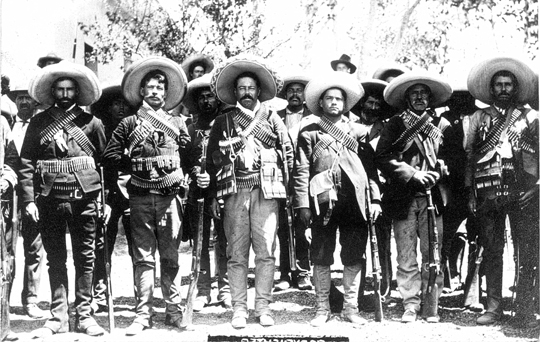 1910-1920 were years of convulsion, change, and crisis both nationally and internationally– a transitional period that was characterized by strong social conflicts. The growth of the Socialist Party and the IWW as well as the Lawrence and Peterson strikes, the Ludlow massacre, the immigration waves, the anti-monopoly movement, and demands for local political reforms combined to create the sense of a deep crisis in US society. The Russian Revolution caused capitalism’s existence to be called into question by workers around the world. World War I shook Europe to the core in a sea of blood and devastation. The Mexican Revolution threatened to spread onto US soil– where millions of people of Mexican origin lived.

On April 21, 1914, the US Navy occupied Veracruz, killing 126 Mexicans in the process. The next day, private guards working for mining companies massacred striking workers in Ludlow, Colorado.

The US intervention during the Mexican Revolution was the result of a series of factors. For Americans, the US had a responsibility to expand its authority over “semi-barbaric peoples” like the Mexicans. They also sought to save US investments in Mexico and at the same time extend and deepen American influence and domination over the country. But there was also an underlying perception that the Mexican Revolution constituted a grave threat to the US. On the one hand, there were obvious dangers to the US: Pancho Villa had attacked the town of Columbus in March 1916. Despite Gen. Pershing’s “Punitive Expedition” and the increasing number of troops near the border, Villa snuck into US territory once again, managing to get more than ­300 miles in.

The role of Mexican immigrants in Texas was particularly important. From 1910 to 1912, between 60,000 and 100,000 Mexican workers crossed the border every year to work. These workers came from areas affected by the revolutionary movement, and they brought their experience and demands with them. In the US there were workers that might have been receptive to the influence of the Mexican Revolution and that could have engaged in effective revolutionary action. From the US employers’ point of view, the Mexican Revolution was no longer an event in a neighbouring country and was becoming more and more a potential inspiration for the working class on US soil that could affect capitalist interests and the system’s stability.

This perception was based in the extended participation of Mexican workers in organizations like the Mexican Liberal Party (PLM), the IWW, and the Socialist Party. It was through the PLM that Mexicans in the US contributed to the Mexican Revolution by organising working class cells. The PLM’s anti-capitalist and anarcho-communist rhetoric resonated greatly with Mexicans living in the US. Combining theory and praxis, the PLM actively participated in the struggles of agrarian and industrial Mexican workers of the south-eastern part of the US.

Through the PLM many Mexicans became members of the IWW. Since 1900, Mexican workers participated in strikes in Colorado by forming the Western Miners Federation, which was linked to the Socialist Party and was a founding organisation of the IWW. These were the workers who, along with their US comrades, carried out the Ludlow mining strike in 1914, which resulted in a massacre perpetrated by the bosses and sparked other strikes in Arizona during 1915. The smelters’ strike of El Paso (Texas) in 1913, was one of the biggest in that city’s history. The alliances between Mexican workers, the local community, IWW activists, and American socialist militants made the bosses and the Texas government profoundly nervous, and they did not hesitate to call in the state troops to harshly repress the conflict. The same thing happened in the Mexican wheat sowers’ strike of California in 1913.

Mexican workers in the US made up a combative and radicalised community with an admirable tradition of militant activity and strong links to the Mexican Revolution. In Texas, Mexican socialists organised their own people. Throughout all of the US South-west Mexican peasants were organised in the American Tenants Association and the American Land League; they even tried to organise a general strike. In 1915, the Mexican community in southern Texas staged a separatist armed insurrection aimed at reuniting the US South-West with Mexico or at establishing a sovereign Mexican state.

Many of the thousands of people mobilised by the IWW against government censorship between 1910 and 1911 later became part of the “insurrectional socialists” that fought in the Mexican Revolution. The Union of Mining Workers demanded that President Wilson stop intervening in Mexico and help the Ludlow workers that were being massacred. In short, there was a strong tie between Mexicans in the US and the most radicalised left. The PLM had a tradition of organising Mexican workers on both sides of the border. The Villistas also organised support groups for the Revolution among the Mexican community in the US. This was made possible through a vast underground network of relations, organisations, and solidarity. There were links between Mexican revolutionaries, the Mexican community in the US, the anti-imperialist, anti-intervention and pacifist movements, and the combative syndicalism of the US.

Relations between the Mexican Revolution and the progressive and left movement in the US were perceived as dangerously alarming for the US internal situation. The same organizations that carried out the textile workers’ strike in Lawrence were also involved in the struggle of Mexican workers in Arizona; they opposed the participation of the US in the World War and the intervention in Mexico and viewed the Bolsheviks in Russia with sympathy. The most radicalised wing of the Mexican Revolution was the one that was involved in organising, along the IWW, the Mexican workers in the US, and the same people who organised solidarity and support for the Mexican revolutionaries worked together with Villa when he invaded the US, eluding federal troops with the help of Mexicans in the US.

People like Lucy González de Parsons and John Reed expressed these links and subversive danger. Parsons, who was Mexican by birth, was a widow of one of the Chicago martyrs and an important socialist (later communist) leader. Reed, member of the Socialist Party, sympathiser of the IWW, journalist of the socialist newspaper The Masses, and founding member of the Communist Party USA, had participated and written about the Mexican and Russian Revolutions. For many, this was not a mere coincidence, but a clear proof of a dangerous conspiracy.

The national situation can’t be separated from the international situation. The US had to get involved in the Great War, just as it was necessary to smash the Russian Revolution, and to repress the pacifists and American socialists. The sending of troops to Russia and the Red Scare of 1919 fulfilled that role. As for Mexico, it was necessary to hold sway over its national politics and guarantee that the less radicalised sectors became victorious. It was important to stop the spread of revolutionary ideas across the border through the exploited Mexican working population, which was becoming more and more influenced by the revolutionary process. In this sense, repression in the US, the armed foreign intervention, interference in Mexico’s inner affairs, the declaration of war to the Central Powers, the Archangel campaign, and the occupation of Vladivostok are inseparable.