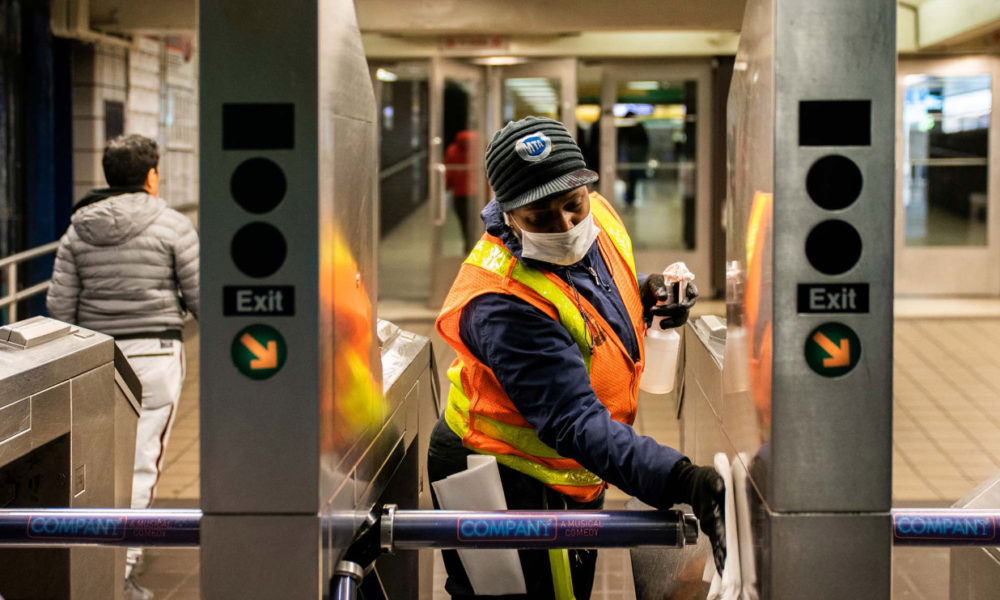 As the Coronavirus crisis worsens, massive numbers of workers who cannot afford to isolate themselves are forced to ride packed NYC subway cars, with untold numbers becoming ill from the overcrowding. This is a result of the massive cuts to the city’s mass transit service, which were made despite the need for social distancing. City transit workers are finally getting some protective gear, but it is far too little too late for the 41 workers who have already died and the more than 1,100 who have contracted the virus. And there is no protective gear supplied to the people who have to keep riding the trains during the pandemic.

As early as March 19, it was publicly announced that 23 MTA workers — who work in the city and in the broader metropolitan area — had tested positive for the Coronavirus. At least three of those workers were stationed at the Fresh Pond Bus Depot in Queens. The workers’ union, TWU local 100, called on the MTA to “arrange for expedited testing of its front-line employees and to consider taking additional aggressive steps to protect them.”  The MTA Chairman and CEO Patrick J. Foyle replied that the employees who had been in direct contact with the three Fresh Pond workers were in quarantine and that workplaces would be “immediately and aggressively disinfected,” assuring the workers that more tests would be made available.

Yet an MTA memo issued the same day posted in a Brooklyn bus depot bluntly stated: “Attn Bus Operators: As per AGM [name redacted], facemasks are not to be issued to you.”

The fact that the MTA is run by a CEO is part of the explanation for its search for the cheapest way possible to handle the crisis: wait to see when a worker is infected, quarantine those who were in direct contact with them, but take no widespread preventative measures to keep the workers from contracting the virus in the first place. And as of March 23, there was still no widespread testing available for MTA workers.

The MTA had already started cutting down on service by March 25, exacerbating the circulation of the virus among workers and riders. At that point, many of the usual passengers had stopped going to work, heeding the state’s calls to stay inside and avoid unnecessary travel, working from home whenever possible. But this directive was impossible for many of the workers in New York. Residents who work in healthcare, food service, and other businesses deemed “essential” could not stay home for fear of losing their jobs. And despite the fact that riders were already reporting crowding beginning to occur on the trains, some even producing video of crowded trains, Foyle refused to admit this was an issue.

On March 30, The New York Times wrote about the changes in the subways: “It is a striking turnabout for a system that has long been the great equalizer, a space where hourly workers jostled alongside financial executives. Now the subway has become more of a symbol of the city’s inequality, amplifying the divide between those with the means to safely shelter at home and those who must continue braving public transit to preserve meager livelihoods.” The same article pointed out that ridership in higher-income areas was plummeting, while in lower-income neighborhoods, the decrease wasn’t nearly as dramatic.

Dangerously cramped conditions on transit continued, with a barrage of photos of packed subway cars revealing that almost all of the riders on the overcrowded transit system are Black and Brown people.

With characteristic superiority, Mayor Bill De Blasio, who has shown callous disregard for city workers and residents during the pandemic, blamed the workers themselves. Saying the situation was “not acceptable,” De Blasio admonished: “I understand people are trying to get somewhere, but no one should be getting on a crowded train…spread out throughout the train, wait for the next train.”  With this, the mayor insisted that workers are simply disregarding the rules, insisting on actually using the transit system rather than waiting for a magically empty train car as fewer and fewer trains are running.

He went on to threaten to dispatch police to enforce social distancing, saying the police would “they’re going to literally split it up, pull people off the train, move them along to different cars, whatever it takes.”  “Whatever it takes,” when used to discuss the policing of majority Black and brown people, is a phrase that lays bare the city administration’s attitude towards people of color during the pandemic.

As both deaths and confirmed cases of the coronavirus rose among city transit workers, the MTA continued to blame working people riding the subway instead of blaming their own cuts in service. In a complete disconnect from the reality of the lives of workers, Sarah E. Feinberg, interim president of New York City Transit laid the spread of the virus at the feet of those using the transit system. “You are quite literally potentially risking the lives of your friends, loved ones and your own family ones and our workers,” she said. “If you want to be a patriot, if you want to be part of New York surviving this crisis, if you want to be part of the solution, then please, stay home.”

The MTA continued to place workers at serious risk while throwing crumbs: On March 27, it announced the inadequate new supply of 75,000 masks for the entire workforce, with no increase in other PPE. Finally, the agency announced on Saturday that it will be distributing 250,000 N-95 masks to transit workers.

But this is little comfort for the families of the 41 transit workers who have died or the 1,1000 workers with confirmed cases of the virus as of Wednesday. Meanwhile, coronavirus-related deaths in the city continue to rise, with 4,755 dead.

Nor does this late protective gear help the hundred of thousands of workers who keep this city running — emergency healthcare workers, home health care aids, food service workers, package handlers, and all other workers deemed “essential.”  Those transit riders will continue to be put in serious and unnecessary danger just for needing their jobs. State and federal agencies across the U.S. continuously refer to essential workers as “heroes.” Yet the value placed on workers’ lives is apparent.