On December 22nd, Cuba’s highest legislative body approved with amendments the new National Constitution that will replace the one adopted in 1976. It will become effective after being submitted to a ratification referendum on February 24. 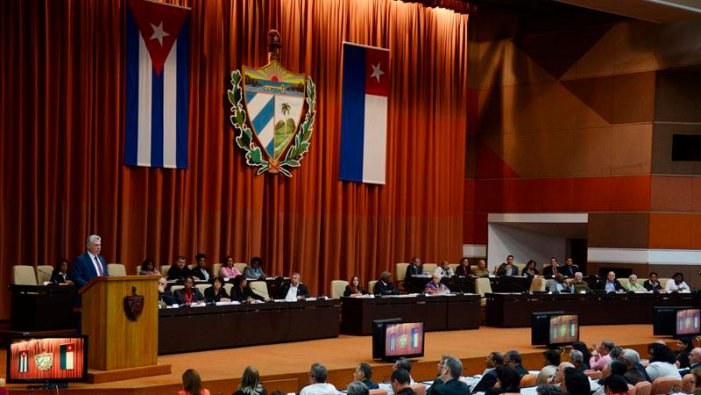 The National Assembly of People’s Power (AN) was held in Havana to discuss the new draft Constitution. Of its 602 members, 19 were absent and 583 voted in favor of the new version.

Raúl Castro, First Secretary of the Communist Party of Cuba and president of the Drafting Committee for the Draft Constitution, was present but did not speak. The closing speech was given by the President of the Council of State and the Council of Ministers, Miguel Diaz-Canel, who underscored the “generational continuity” on the 60th anniversary of the revolution, in reference to the departure from the government from the generation that had led the 1959 Revolution, which took place in April 2018.

The final version of the new Constitution will be published in the next few days, but according to the official newspaper, Granma, the most debated points included new forms of property and equal marriage.

In the first case and as expected, private property, which until now was only mentioned in national laws, will acquire constitutional status, and the role of the “market” (capitalist relations of production and exchange) will be recognized as part of the “socialist economy.”

As indicated in the Economic Fundamentals, private property will thus be included in the Constitution along with other forms of property: socialist (state-owned), cooperative and mixed (state-owned and private with majority state ownership), in addition to the property held by mass organizations and personal property, which are not means of production (Section 21).

The draft analyzed by the legislators indicates that the State will ensure that “there is no concentration of property in the hands of non-state natural or legal persons” and that the law will establish the regulations that guarantee compliance (art. 22).

On this aspect of accumulation, a high government official interviewed on television indicated that some believe that the Constitution should not establish a policy in this regard, as this matter is regulated by legal provisions applicable to companies. He added that accumulation is inconsistent with the foundations of the Cuban socialist state, but that the point is what limit is established for accumulation.

The new Constitution declares that “socialist property,” such as land, mines, water and other essential resources, are “inalienable, indefeasible and cannot unseizable” (Section 23, subsections 98 and 99). However, it establishes that “the transfer of other rights over such property shall take place with the prior approval of the authorized agency or authority” (subsection 100) and that “The law defines other ways in which this type of property may be managed” (subsection 106).

The “market” will also be recognized as part of the “planned management of the economy” and regulated by it (Section 20). In Díaz-Canel’s closing speech, he emphasized the need to “to learn from the experiences of other socialist nations, such as China, Vietnam and Laos” in reference to their models of “market socialism,” which have been praised by Raúl Castro on several occasions, and which combine a market economy with a single-party political regime based on communist parties.

To justify these important constitutional changes, the government and the bureaucracy of the Communist Party of Cuba maintain that the new Constitution should reflect Cuba’s social reality, which after decades of pro-market reforms, already has a significant legal framework clearing the way for foreign and national private property. The aim of a Constitution is not, however, to “reflect the existing society” but to establish general rules for social life.

The false idea of “reflecting” the existing society is an excuse to grant constitutional status to the pro-market reforms that have been imposed especially since 2011, with the implementation of the “Economic Guidelines” approved in the 6th Congress of the Communist Party of Cuba to “update the Cuban socialist model.” The consequences of this process have been the weakening of the nationalized economy, along with austerity measures, such as the dismissal of almost half a million state workers, while the bureaucracy maintains all of its privileges and perks, which allow its high-ranking sectors, especially the leadership of the armed forces (FARC) to participate in big business dealings through the control of state companies and foreign trade.

On the issue of equal marriage, which generated high expectations since it was included in the draft, the resolution of the National Assembly has not been entirely clear and we will have to wait for the final version.

In the proposed draft, the words “man” and “woman” included in the old constitution were removed and replaced by “persons,” thus eliminating the gender distinction for the right to be married. As reported, this new wording was eliminated in favor of a general reference to the Family and the matter was postponed to be specified in the Family Code and ratified in a referendum within 2 years.

To justify this resolution, it was argued that this issue was the most debated in the process of popular consultation at 66% of the meetings and the majority asked for the wording of the old constitution to be maintained. Although no information is available outside of the government, these measurements reflect the significant religious population in Cuba, both of Catholic and Evangelical churches as well as other religions.

It should be noted that in recent years the Cuban government has strengthened its ties to these reactionary institutions, especially with the Catholic Church which, for example, is allowed to publish and distribute its own publications and freely organize and promote its ideas. Meanwhile, all those who defend the gains of the revolution but question the bureaucracy and its reforms are prohibited from organizing.

The National Assembly elected in March 2018 includes a significant religious group that has expressed its opposition to the basic right of equal marriage.

The new Constitution will also include other amendments, such as the establishment of the Cuban State as secular for the first time; the guarantee of free artistic expression that has been an important topic of debate since a recent executive order (349) that provoked significant criticism from sectors dedicated to the arts and culture; or the right to inherit and the obligation of descendants to take care of their ancestors; among many others.

After the unanimous vote in favor of the amended constitution, at the end of the session, the members of the National Assembly established their main objective of guaranteeing the participation of the people in the referendum on February 24 by which this new approved Constitution is to be ratified.