During the weekend, police used social distancing regulations to terrorize POC communities. While Black and Brown people were thrown onto sidewalks and handcuffed for standing too close to one another, affluent white neighborhoods peacefully sunbathed in parks in defiance of social distancing protocols. 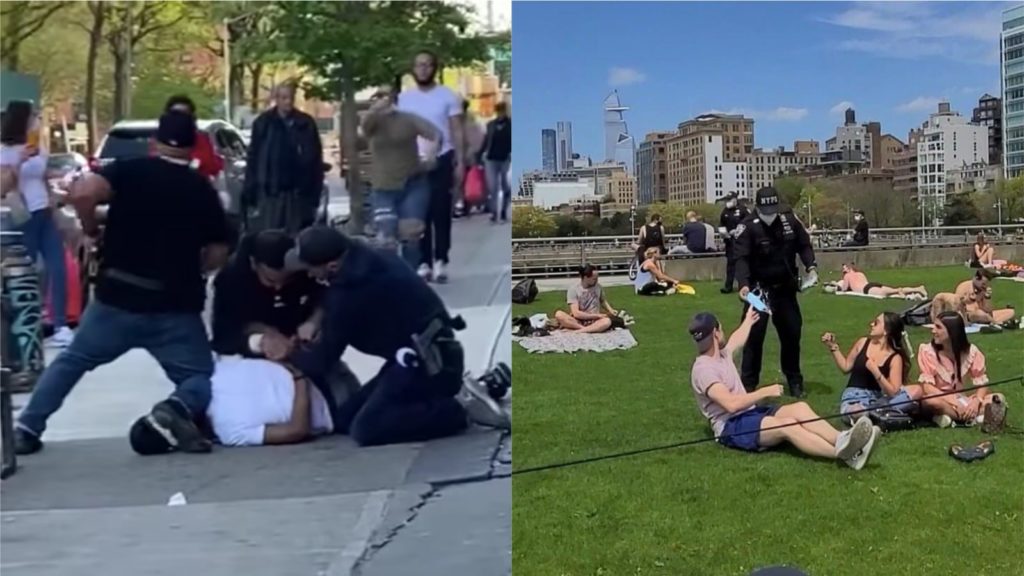 The first weekend of May gave way to beautiful weather, high temperatures, and police brutality. The NYPD has recently assigned 1,000 officers to social distancing patrols. Unsurprisingly, the systemically racist institution has taken to policing Black and Brown communities with high rates of violence while white communities are treated with smiles.

This uptick in police brutality under false pretenses is reminiscent of the Stop and Frisk era in New York City. Under Mayor Bloomberg, Stop and Frisk policies were ramped up, allowing the NYPD to harass residents with impunity. From 2002-2019, Black communities represented over 50% of the interrogations, with Latinx communities close behind at 30% of the stops. Since Stop and Frisk ended, police officers no longer have the legal authority to stop city dwellers without probable cause. But the new social distancing regulations are quickly filling the hole. The new policy is rapidly allowing the NYPD to profile and intimidate working class, POC communities at a far greater scale.

On Saturday, May 2, Ashley Serrano and Shakiem Brunson were speaking to one another, six feet apart, outside of a deli in the East Village. The interaction caught on security cameras shows Serrano stepping next to Brunson briefly and then they are immediately bombarded by three plainclothes officers. Within seconds of this interaction, an officer grabs Serrano, restraining her and pushing her onto the sidewalk. Brunson is then forced against a wall by police officers. This  violence was the cops’ response to a supposed  “social distancing violation.” But the cops weren’t overly ambitious health protectors — the police officers themselves were not even wearing masks. One officer can be seen with a mask underneath his chin, clearly choosing to not wear it. In an official statement, the NYPD claimed that Serrano and Brunson were in possession of a bag of marijuana. Even if this were true, such a “crime” only warrants a small ticket in the state of New York. The police also claimed that Brunson “became aggressive” during the encounter, an unsubstantiated but all too common accusation from the NYPD to justify police brutality.

Meanwhile, one of the arresting officers, Francisco Garcia, spotted bystander Donni Wright and began to walk towards him while unholstering his taser. On camera footage of the event, Garcia can be heard screaming, “Don’t flex!” as he approached Wright from across the street. The video doesn’t show Wright’s reaction to having the taser pointed at him, but Garcia is shown reholstering his taser before beginning to punch and slap Wright, eventually pinning him to the ground with a knee on top of his neck.

As a result of this interaction, Wright was charged with assaulting an officer, menacing, resisting arrest, obstructing governmental administration, as well as disorderly conduct. According to bystanders, these charges were falsified: no “assault” against a police officer occurred. Meanwhile, Brunson is facing charges of criminal possession of a weapon, unlawful possession of marijuana, and resisting arrest. Serrano’s charges include criminal possession of a weapon, as well as resisting arrest and disorderly conduct. Eventually the charges were dropped for Donni Wright, but Brunson and Serrano’s charges are currently pending until an internal investigation within the NYPD has been completed. When the NYPD is involved, more often than not, victims end up paying the price.

Officer Francisco Garcia has a sordid history of abuse since joining the force in 2012. He has cost the city almost $200,000 in seven civil rights lawsuits and is still on active duty. Garcia, whose beat is in Manhattan, has been known to patrol NYCHA housing in order to harass and intimidate the poor, predominantly POC inhabitants. In 2014, Garcia physically assaulted and arrested Marcus Bussey while he was waiting for his girlfriend in the lobby of a public housing development. In another complaint from 2013, Garcia began harassing a woman eating at a Harlem restaurant. He told her that she “dressed like a man,” and then proceeded to call her a “dyke” and physically assault her. After costing the city thousands of dollars and receiving inter-department “discipline,” Garcia remains on the force and has since received a significant raise. Garcia’s continued presence in the NYPD makes evident what organizations such as Black Lives Matters have been calling out for years: The NYPD, at its core, is a racist institution, one that exists only to protect and serve the interests of the city’s wealthier, white residents and businesses by repressing working and poor people of color with impunity.

Recent photographs that appeared in the Gothamist show the stark disparities in policing. On the same day that police reacted violently to social distancing in poorer communities, masses of people — the majority of them white — swarmed to the parks in higher income neighborhoods to sunbathe in the beautiful weather. In all the photos, there is hardly a mask in sight and no one seems to be adhering to the six feet apart rule. Police are seen throughout the park, but they aren’t enforcing social distancing with incredible violence; instead they can be seen casually chatting and handing out face masks. Some New Yorkers were even seen turning down the offer of a free mask as they continued to defy social distancing policies with the blessing of the officers.

Later on in the weekend, Black Lives Matter NY Chairman, Hawk Newsome, confronted a mob of officers to call out their racialized tactics. After witnessing a group of mourners outside the Melrose Houses public housing complex in the Bronx get pepper sprayed by the police, Newsome began videotaping the police to deter them from any more violence. On the video, Newsome is heard describing the events from the prior evening: “We saw Garcia on PSA4 last night slapping the shit out of people for being outside in the projects…Meanwhile, white folks on the west side of the village are enjoying their lives.” The police begin to surround Newsome as he’s walking away and then proceed to arrest him. Newsome shouts to the crowd as they bring him towards the car, “This is our community. They are outsiders.” Newsome has since been released and given a summons.

During the first weekend of May, 51 summonses were issued regarding social distancing enforcement. As of yet, no demographic data has been released but the answer is already clear. Poor, Black, and Brown folks are being disproportionately policed. Stop and Frisk ended in 2013, but over-policing in these communities has not. POC communities will always be met with violence when the NYPD is put in charge of so called “safety measures”— such measures are merely excuses to harass and terrorize. While both Mayor De Blasio and Governor Coumo have come out publicly against these enforcement discrepancies, the extent of their outrage is tweets. Instead, the city is continuing to move forward with the hiring of 500 cops specifically to police the subway system.

In a week full of “Reopen the Economy” protests, men and women, a majority of whom were white, stormed the streets and rushed into government buildings fully armed. The police maintained composure. No pepper spray, taser gun, or fist came down upon a single participant. The police force has always had the tools to react non-violently to citizens, but they only reserve these tactics for white and wealthy people.

A true “public safety” measure would be to protect these communities from the violence of the NYPD and give people access to proper protective equipment. The police shouldn’t be in charge of enforcing social distancing. They need to be taken out of communities, where they are doing nothing but terrorizing working and poor people and spreading the virus. Instead of relying on the police force, social distancing patrols should be handled within communities themselves. Healthcare professionals and unemployed workers should be utilized to help communities access face masks and public health education.