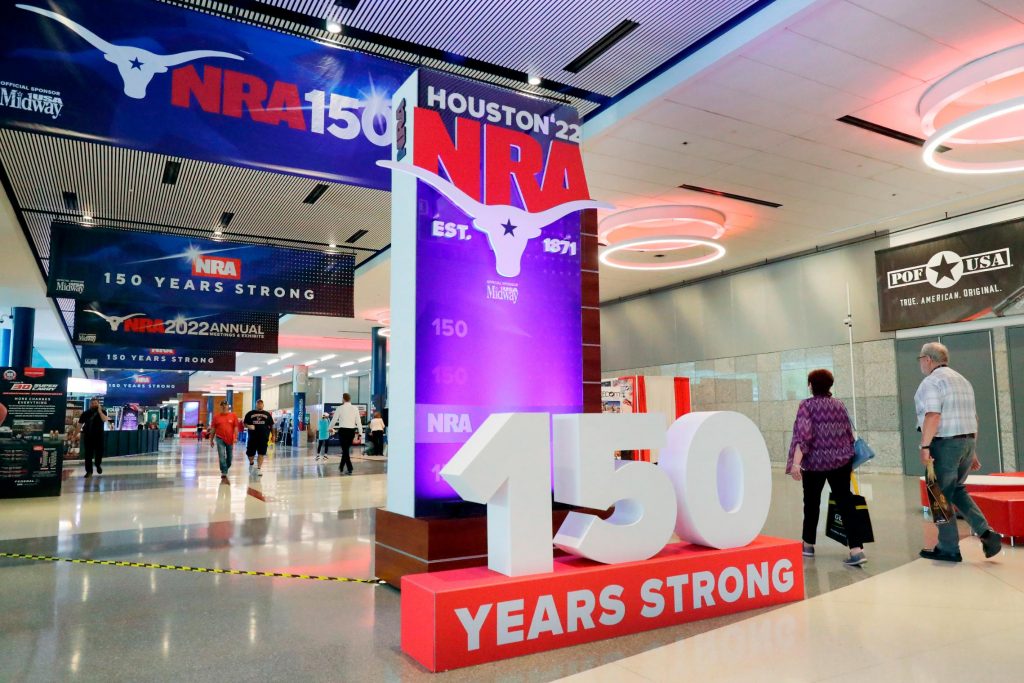 Today, a group of right-wingers are gathering to fetishize guns. The cast of characters includes a former president, multiple sitting congresspeople, and the senator of a state which just saw the fourth deadliest school shooting in American history. There also will be members of the far-right group the Oath Keepers, people who attempted to overturn the results of the last election, weapons manufacturers, people who call queer people “degenerates,” and an actor who once played Superman. And that’s just the board members.

The National Rifle Association (NRA) hosts their annual convention this weekend just a few days after a school shooting in Uvalde left 19 children and two adults dead and a few weeks after a white supremacist fatally shot 10 peoplein a supermarket in Buffalo. Yet, the convention — the Association’s first since the pandemic began — is proceeding as normal, complete with a keynote speech from Donald Trump. The event will also feature speeches from multiple members of the military and police.

While the NRA has the audacity to tout itself as “America’s longest-standing civil rights organization,” in actuality it’s a devoutly right-wing organization which works to protect the profits of the gun manufacturers who fund them. Indeed, the NRA functions as the primary lobbying arm of the entire gun industry and donates in huge numbers to politicians — and not just far-right Trumpist politicians. In fact, the NRA has donated millions to North Carolina Senator Richard Burr, who voted to convict Trump in the impeachment trial, Senate Majority Leader — and Trump opponent — Mitch McConnell, and even a handful of Democrats.

Indeed, the NRA spent $250 million in 2020, largely on lobbying and donations to stop even attempts at discussing gun policy. This is indicative of the way that lobbying works under the current system: corporations give off-shoot lobby organizations huge swaths of cash which they then use to “influence” policy by passing that money on to politicians. Politicians of both parties are happy to accept this money and, in return, do the bidding of whichever industry has bankrolled them. This is such a bipartisan phenomenon that in 2022, Democratic Majority Leader Chuck Schumer is currently the top recipient of lobbying money, by a pretty wide margin.

Yet, for all of their blustering about protecting gun rights, the NRA has consistently failed to even make a statement when the most policed group of gun owners is targeted by the state. There’s a reason for this, of course, and it’s that the gun owners who face the most repression are Black. But the NRA isn’t interested in them. Not when the police killed Philando Castile in front of his child for having a legal and licensed gun in his glove compartment — which he informed the police he had a license to carry. Not when Tamir Rice was killed for having a toy gun. Not when Kenneth Walker, Breonna Taylor’s partner, fired his legal and licensed gun to protect himself from a home invasion and was then arrested. Not even when Gaige Grosskreutz, a white gun owner and BLM protester, was shot while attempting to be a “good guy with a gun” against active shooter Kyle Rittenhouse. Instead, the NRA tweeted text of the 2nd amendment in support of Rittenhouse immediately after his acquittal and never spoke of Grosskreutz at all. The list of the NRA’s refusal to support Black gun owners goes on and on and on.

In fact, rather than show any support for the Black Lives Matter Movement — a movement which featured the actualization of the famous NRA hypothetical of “jack-booted government thugs [taking] away our constitutional rights … and even injur[ing] or kill[ing] us,” — leaders of the NRA spoke against the movement. One board member called BLM a “rancid evil,” a former NRATV host called Castile a “gun-toting thug,” and another NRA board member wrote multiple op-eds against the movement. Indeed, the NRA is so pro-cop and that they even have a special division for law enforcement.

But the NRA’s racism isn’t anything new. They supported George Zimmerman and, most damningly, even supported gun control laws when it was aimed at disarming the Black Panther Party. The 1967 Mulford Act was a California state law (pushed through by then-governor Ronald Reagan) which was a direct reaction to the Black Panther’s policy of arming themselves. The law banned open carry of loaded firearms and banned all loaded firearms inside the state capital. This was a direct response to, amongst other things, a 1967 occupation of the state capitol by 30 armed Black Panthers. Compare the NRA’s response to this to their response to the January 6 riots and it is clear who the NRA is interested in advocating for.

This weekend’s convention will feature many grand speeches about freedom, liberty, civil rights, and the Constitution. But the NRA is little more than a front group for the gun industry which has cunningly used the rhetoric of freedom and resisting state repression to work in tandem with the state to ensure that guns are kept in the hands of a privileged minority — specifically middle- and upper-class white people. For all their talk about “jackbooted thugs,” the NRA has not only welcomed those thugs but given them their own special division within the organization and multiple speaking slots at their convention.