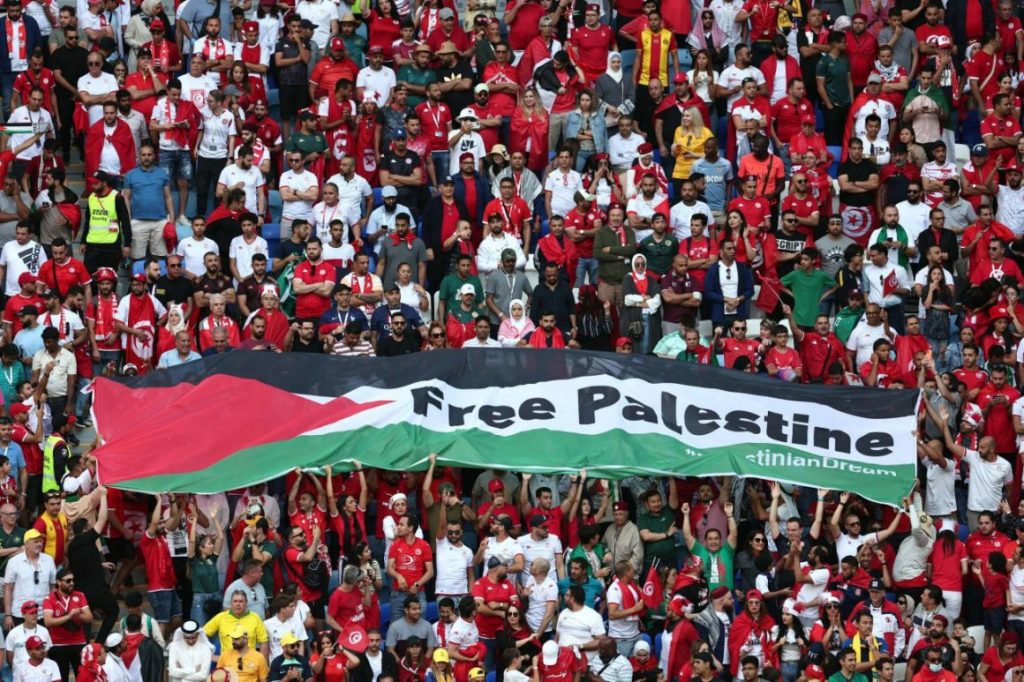 As the world celebrates Argentina (or cries for France), one of the real winners of the World Cup is the cause of Palestinian liberation. Throughout the tournament, Palestinian flags could be seen waving amid the crowds of fans, and fans from all over the world have been seen shunning Israeli reporters or declaring “Free Palestine!” to the reporters’ chagrin. One man even evaded security, ran onto the pitch during the game, and did a backflip wearing a Palestinian flag. The stands erupted in chants of “Free Palestine!” In cities around the world fans have been filmed doing the same. Celebrators in France defiantly donned the Moroccan and Palestinian flags while challenging the police who attacked the celebrations.

This came in the context of a politicized World Cup. An unknown number of workers died building stadiums and other infrastructure in Qatar, but it is estimated that over 4,000 people were worked to death under horrendous subhuman conditions. FIFA worked hard to repress any mention of this, barring players for expressing solidarity with the workers. This didn’t stop players from taking political stands throughout the tournament.

The National Moroccan team, which took fourth place in their loss to Croatia, made a historic climb to be the first African/Arab country to make it to the semi finals. Throughout their playing they waved both the Moroccan and Palestinian flags.

This exemplifies a much broader shift in solidarity with Palestine around the world. 2022 saw massive protests in international solidarity with Palestine against the attacks on Sheik Jarrah and the murder of journalist Shireen Abu Akleh. This year, at least 34 children have died at the hands of Israeli government including 7-year old-Rayan Suleiman who was so terrified of the Israeli forces charging him he had a heart attack. Fury against the killings and daily harassment of Palestinian people by Israel and violent settlers has been met with solidarity, and World Cup exemplified that.

The apartheid regime of Israel has intensified their brutality against the Palestinians during the World Cup. Israel has bombed Syria, killing people of all ages including 22-year-old Ammar Mifleh. Eight others were killed in an attack in Jenin on the West Bank. Politically, the Far Right is growing electorally with former prime minister Netanyahu making a political comeback.

While reactionary politics are growing in the apartheid state, the World Cup showed that people across theworld stand with Palestine and support the liberation of the Palestinian people. As a country not formally qualified in the World Cup and not recognized by murderous imperialist powers like the U.S. government, Palestine was a clear winner of the tournament and grew its solidarity. Free Palestine!!