The Pandemic Couldn’t Stop Us: Labor Struggle Is Back and Strong As Before

From auto manufacturing and coal mining, to healthcare and higher education, workers across the United States are striking in numbers not seen since before the pandemic. 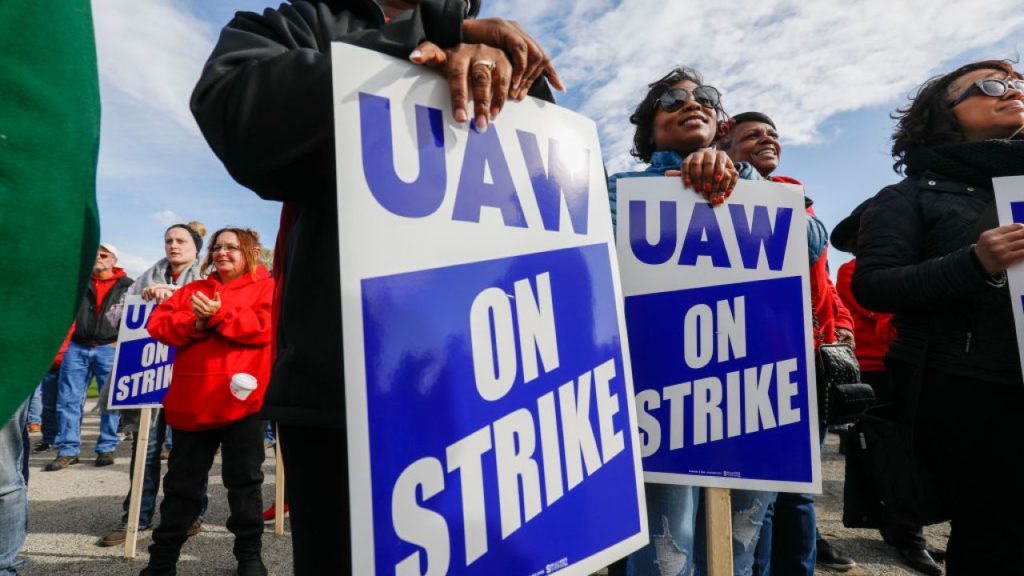 In December of 2019, just a few months before the coronavirus turned the U.S. economy inside out and millions of people lost their jobs, the Bureau of Labor Statistics (BLS) issued its last monthly report on major work stoppages for the year. By the time the entire year’s strike numbers were tallied, there were 28 major work stoppages of 1,000 people or more in 2019, involving a total of more than 425,000 workers. This was eight more strikes of such nature than occurred during the previous year, when hundreds of thousands of public school teachers took to the streets across the country; and it was the highest number since 2001, which had a total of 30 major work actions. In 2020, because of the pandemic, those numbers dropped to just eight. Although there was plenty of militant labor action in response to the unsafe working conditions of the pandemic, as reporters like Mike Elk have tirelessly catalogued; major work stoppages — the kind the BLS reports on — were far fewer. But as the pandemic tide recedes, and unemployment begins to drop, organized labor is beginning to re-assert itself.

Since January of this year, there have already been at least seven major work stoppages in the United States across several distinct industries involving thousands of workers. In addition, there have also been several other large walkouts with slightly less than 1,000 workers — the kind the BLS does not report on — including several ongoing strikes in the healthcare industry. including hospital workers in Bend, Oregon, and the Tenet nurses’ strike in Worcester Massachusetts, where nurses have been on strike for almost two months. And just this week, 5,000 nursing home workers represented by SEIU at over 30 facilities in Connecticut voted overwhelmingly to strike if their demands for more state funding and safer working conditions are not met.

Of the seven major work stoppages so far this year, at least three of them are ongoing. In Alabama, Left Voice was on the ground with the 1,100 coal miners represented by the United Mine Workers of America, who are in the fourth week of a strike for better wages and job  security. These militant rank and file miners are refusing to back down until they win their demands, and have already voted once against a proposed contract brought to them by the union leadership. The strike, which started just one day after the failed Amazon unionization vote, shows that the long tradition of Southern labor militancy in the South has not been forgotten despite the many setbacks that workers and unions have suffered there.

Further north, workers at the Volvo and Mack truck manufacturing plant in Dublin, Virginia — the largest Volvo truck manufacturing plant in the world — have been on the picket lines for almost two weeks now. These workers are demanding better wages, retirement benefits, and an end to the ugly two-tier wage system that pays new hires only a fraction of what more veteran employees make. Though the UAW leadership, like all other business-unionists, seems determined to work with the management in the interests of Volvo’s bottom line, the rank and file workers seem to be in this for the long haul, knowing that they are on strike at a time when international demand for Volvo Trucks is up an incredible 242 percent.

Meanwhile in New York City, in the heart of the global financial capitalist beast, 2,000 graduate workers represented by the United Auto Workers (UAW) at New York University walked out on Monday. They are demanding higher wages, child care benefits, and — in a sign of the shifting militancy of such labor actions — the removal of all New York Police Department officers from their campuses. This strike comes amid ongoing negotiations between 3,000 other graduate workers, also represented by the UAW, at Columbia University who have temporarily paused their strike, which began last month, to debate and vote on a proposed contract offer. Currently many rank and file graduate workers at Columbia are organizing to reject the university’s offer and return to the picket lines, even as the UAW bureaucracy pushes for a settlement.

This resurgence of strike activity suggests a possible return to, and even an escalation of, the rising levels of organized labor struggle that we saw before the pandemic, and could be the beginning of another record year for major work stoppages. These strikes are also a clear continuation of the thousands of smaller, but still militant struggles that happened in workplaces everywhere during the pandemic, when workers across several industries walked out and demonstrated for safer working conditions, personal protective equipment, and hazard pay. While most of these strikes (with the exception, perhaps, of the New York University graduate workers action) are not directly influenced by last summer’s nationwide uprisings against police brutality, they are nonetheless a reflection of the same pent-up anger and concern over decades of increasing economic exploitation and state repression that came to a boil during the pandemic, when Ionsgshore workers across the west coast shut down ports in solidarity.

As the economy reopens, and as employment and consumer activity increases, the power of labor will likely follow, particularly in the warehouse, transportation, and shipping industries. The strike at Mack Volvo in Virginia is just one example of how a small labor force of just a few thousand could cause problems for the entire supply chain, since many of the trucks used to transport goods across the country are manufactured there. Furthermore, the expected surge of new manufacturing combined with the number of workers who have permanently dropped out of the workforce, could result in a potentially tight labor market for employers desperate to compete for a share of the economic recovery. Such a situation could make organized labor more willing to pursue strike actions and more likely to win concessions.

Of course, any labor movement that hopes to win major gains for working people will have to do more than settle for scraps from the table of capital. If working people wish to live better lives, they will have to transform their unions into fighting organizations for the whole class. This requires independent rank and file organizing, a rejection of both parties of capital, and a willingness to break the law and defy the union bureaucracy by striking in solidarity with other unions, the unemployed, and movements against racism and oppression such as Black Lives Matter.