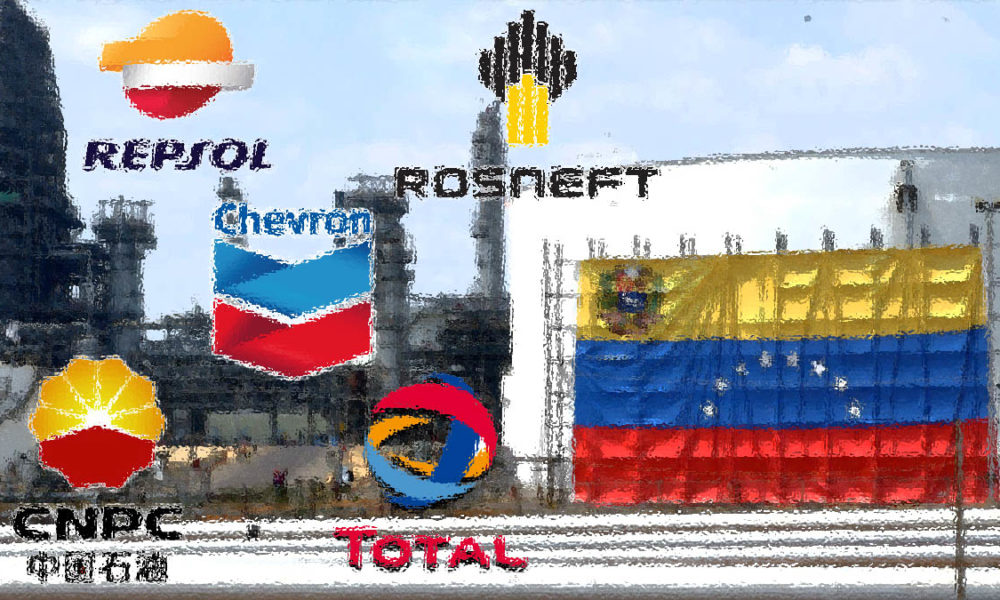 Venezuela is in the midst of a massive economic crisis. Under pressure from the U.S. embargo, as well as the dropping price of oil and the lack of regional allies, Venezuela’s economy has been in a free fall for months. In the last six years, the country’s Gross Domestic Product (GDP) has declined by 72% — a higher number than countries experiencing civil wars. Oil production has fallen to levels not seen for 80 years. This crisis has been helped along by the United States’ failed attempts to organize a right-wing coup and, more recently, by the right-wing coup against Evo Morales in Bolivia.

While President Trump claims that Venezuela is socialist, it never was and certainly is not now. In fact, plans for privatizing the country’s oil production are currently in the news. Both President Nicolás Maduro’s government and the right-wing opposition agree that the only way to “save” the oil industry is by handing it over to U.S., Russian, European, Chinese, and other international corporations.

Venezuela is one of the world’s largest oil exporters, with 25.5% of the known reserves of all OPEC countries. In the 1970s, Venezuelan oil was nationalized in the hands of the state oil company, Petróleos de Venezuela S.A. (PDVSA) — not under President Hugo Chávez, as some might believe. Although Chávez maintained PDVSA as a “mixed” company, with some multinational investment, he did increase the state’s ownership during an oil boom. The funds from this boom were, in part, invested in social programs. Now that the prosperity is over and the crisis has set in, Venezuela is selling off its oil to the highest bidder.

“Facing economic collapse and painful sanctions,” according to the Bloomberg news service, “the socialist government of Venezuelan President Nicolás Maduro has proposed giving majority shares and control of its oil industry to big international corporations, a move that would forsake decades of state monopoly.” Clearly, the term “socialist” is far from an apt description of the Maduro government, especially in light of this proposal to sell off the Venezuelan oil industry to foreign capital.

These decisions, alongside brutal austerity measures, are being forced on the country’s working class. They represent an increasing imperialist insertion in the country by corporations that want to profit from Venezuela’s natural resources.

Indeed, as the Bloomberg article notes, “Maduro’s representatives have held talks with Russia’s Rosneft PJSC, Spain’s Repsol SA, and Italy’s Eni SpA. The idea is to allow them to take over government-controlled oil properties and restructure some debt of state oil company Petroleos de Venezuela SA in exchange for assets, according to people with knowledge of the matter.” The author neglects to mention Chevron, which is also attempting to buy up Venezuelan oil. Interestingly, the right-wing opposition to Maduro – which considers his government completely illegitimate — supports these plans. The only question is who will take the lead in privatizing Venezuelan oil.

In the first days of December, it came to light that the government and the opposition were debating whether to cede operating rights to private companies participating in joint ventures with PDVSA on Venezuelan oil fields. Although these companies are not majority shareholders, Chevron, Rosneft, and the state-owned Chinese company CNPC might take control of Venezuela’s largest oil fields.

Since June, the Energy and Petroleum Commission of the National Assembly, which is controlled by the right-wing opposition, has been discussing a hydrocarbons bill that aims to privatize Venezuelan oil. This bill proposes outsourcing the excavation of crude oil to private companies, an activity that until now was reserved for the state via PDVSA, with PDVSA always controlling a majority of shares — a model that Maduro is now gradually dismantling.

At the same time, Representative Luis Stefanelli of the pro-coup Popular Will party declared that “we are looking for investment from the private sector, as Venezuela does not have official resources to reactivate its industry. It basically depends on national and international investment from the private sector.” At the same time, he pointed out that “a new legal framework,” in the shape of privatization, would reestablish oil as “the lever of development for the future of all Venezuelans.”

The Maduro government began moving toward oil privatization in 2016, when Eulogio Del Pino, then minister of oil and mining, defined his policy as “a new model with a majority from the private sector.” Del Pino added, “We have signed agreements with 20 joint venture companies in the Orinoco Belt under a new strategy wherein the private sector companies own 80% and PDVSA owns 20%.”

Clearly, the big international companies are taking advantage of this situation. With the support of their home governments, these companies are seeking the crown jewel — Venezuelan oil. This will lead to a new episode of plunder and the division of Venezuela into zones of exploitation ushered in by various countries, including Russia, China, and the United States. Indeed, the geopolitical game centered on Venezuela has begun.

It has also been revealed that the Venezuelan government has been secretly negotiating with the owners of US$60 billion in bonds, some of whom are American. These capitalists have offered to partner with the government in establishing a foreign drilling company that would be granted the rights to the oil fields as a means of recovering the debt.

Venezuela’s self-proclaimed “interim president,” the imperialist puppet Juan Guaidó, approves of the privatization plan. But his party wants to carry it out themselves or, if that is not possible, through a transitional government. It is clear that the United States will not remove the sanctions if its interests are not guaranteed. The U.S. sees Guaidó as the best representative of those interests — Trump invited the leader of the attempted coup to his State of the Union, where Guaidó received standing ovations from both Democrats and Republicans. This was part of international tour, including stops in the United States, Russia, China, France, and Italy, all of which are seeking to outline their interests in the loot that is opening up to them in a country in catastrophe.

On Tuesday, the Venezuelan Treasury Department issued a license allowing eight international organizations to conduct transactions with the Central Bank of Venezuela (BCV). Among the licensees are the IMF, the Inter-American Development Bank, and some UN agencies, as well as the Andean Development Corporation, the Inter-American Reserve Fund, and the World Bank. This decision came after the BCV was sanctioned by the U.S. Office of Foreign Assets Control as part of the White House’s sanctions.

Confronting this new episode of plundering facilitated by the Maduro government and the right-wing opposition is one of the great tasks of the working class, which is already confronting brutal attacks on its living conditions. Indeed, this political and economic offensive, alongside the exploitative efforts of the international corporations, will once again put working people in chains.

Translated, including updates and adaptations.