More than a hundred people from across the United States participated in the “SEIU Drop the Cops” virtual town hall. Panelists reported on organized labor’s struggle to kick out police and security guards and elaborated a list of broader anti-racist demands. Speakers called on the broader labor movement to take up the fight against police terror and revitalize the unions through democratic debate and mass, anti-racist struggle. 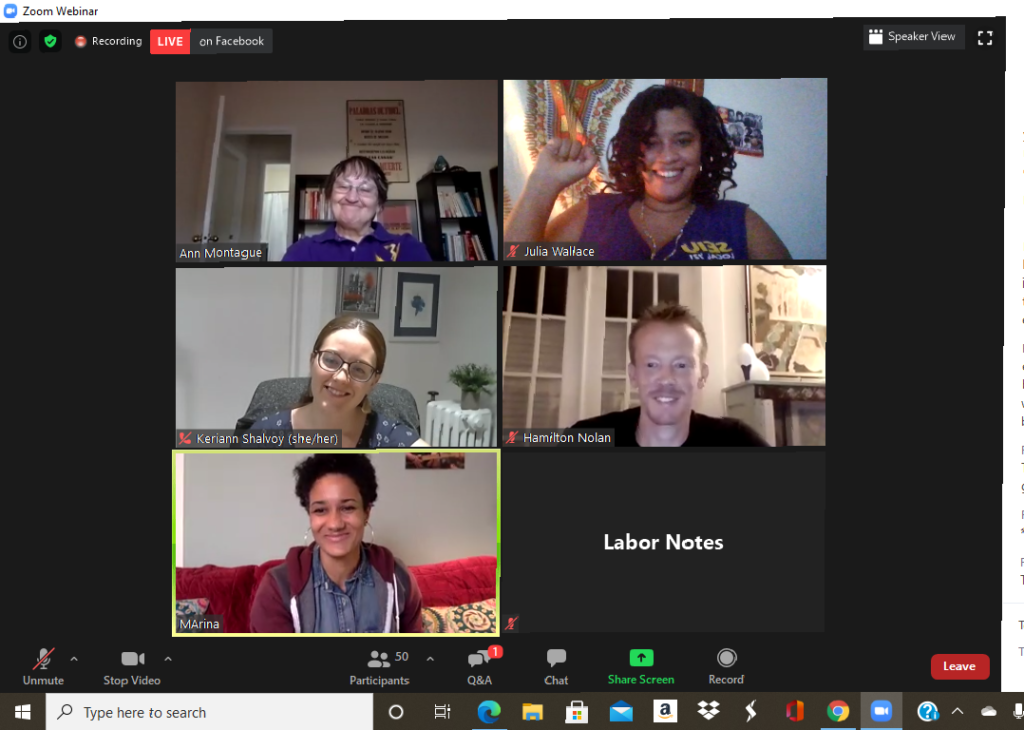 On August 30, SEIU Drop the Cops hosted a virtual town hall meeting to discuss the continuing fight against racism and police terror. The event, which attracted more than a hundred participants, highlighted the campaign’s five demands that advocate for a radical shift in the labor movement. The event brought together workers from a variety of unions across the country.

“We don’t just want to drop the cops. We want to organize more workers into a combative labor movement,” Wallace said.

Hamilton Nolan, a member of Writers Guild of America – East, agreed. “It’s a real stumbling block when you have to always answer for the actions of the police,” he said. Nolan, a writer for In These Times, helped pass a similar resolution a couple of months ago.

Ann Montague, a long-time socialist, spoke about the struggle over armed security guards at Portland State University (PSU). Until 2014, these campus security workers, organized by SEIU Local 503, were unarmed. But as the Black Lives Matter protests were winding down, campus militarization was ramping up. In 2018, two PSU officers shot and killed Jason Washington off campus, again sparking outrage and renewed debates over cops, security guards, police violence, and the attitude of Local 503. At present, it appears PSU Police are finally going to leave SEIU and supposedly will be disarmed.

Beyond the general push for SEIU and all unions to kick out, disaffiliate from, and cease to organize armed forces of the state, panelists also spoke about the demand to “Drop Cop Candidates.” If implemented, this would preclude SEIU from endorsing or contributing financiallyto either the Biden or Trump campaigns, as both are closely aligned with law enforcement — with Kamala Harris herself embracing the “Top Cop” moniker. Indeed, the event posed an explicit challenge to the SEIU leadership’s vow to spend $150 million of members’ dues to help elect Biden. The statement reads:

We demand SEIU provide no support to any political candidate who accepts donations from law enforcement officers, jail and prison guards, probation officers, and armed security officers locals or who intends to act against defunding the police or the platform of the Movement for Black Lives while in office.

Town Hall speakers also emphasized a fifth demand, “SEIU For Black Lives,” which calls on the union to adopt the Movement for Black Lives’ wide-ranging platform. Wallace, despite her own critique the M4BL program’s limitations, recognized that it would be a major step forward were SEIU to take up the struggle against racism more vigorously.

During the discussion period, Marina Stankov-Hodge — an SEIU nurse who moderated the online forum — spoke about her experience living in the slums of Brazil and described that police rarely come from the neighborhoods they patrol. Racist violence by the police and military is common in Brazil, as exemplified by the recent murder of Black teenager João Pedro and city councilwoman Marielle Franco two years ago.

Kariann Shalvoy, a member of Committee of Interns and Residents(CIR)/SEIU Health, spoke about building a reform slate in her union, Housestaff for a Democratic Union. It has also pushed for CIR to disaffiliate from police unions in New York and beyond.

Wallace chimed in when a question was raised about the role of police in society. Their primary function, she explained, is to protect private property, going all the way back to catching runaway slaves — which is the origins of the police — and today repressing workers under capitalism. She recalled a conversation with a member of the SEIU Latino caucus who told her about being beaten by cops during the Justice for Janitors campaign in the 1990s. That member knew the cops were anti-immigrant and anti-union, just as millions today clearly see the cops as anti-Black.

Before the event concluded, participants reflected on the broader significance of unions and their relationship with the mass movement against racism that has swept the nation. Nolan, who recently interviewed SEIU president Mary Kay Henry, sees many challenges ahead.

“[AFL-CIO president Richard] Trumka was trying to sweep our Writers Guild East resolution under the rug,” he noted. “But you’ve got to keep escalating, because most elected union leaders don’t want to take a position. We’ve got to make them take a position and keep this issue in the public eye.”

Wallace, who has worked throughout the pandemic as a social worker on LA’s notorious Skid Row, did not mince words. “The cops’ lack of training is not the problem. The problem is the police are racist, and they uphold a racist system. They have no business in our union!”

Asked about her broader perspective for SEIU, the second-largest labor organization in the United States with a membership of approximately 2 million, Wallace responded quickly.

“NBA players have struck. We had the [symbolic] Strike for Black Lives. We also had the ILWU port shutdown. We need to organize ourselves to strike against police terror! We should be calling on Mary Kay Henry and all union leaders to organize assemblies so we can discuss these issues.”

The Drop the Cops coalition is challenging the entire labor movement to take up the fight against the police and racism. SEIU members know that victory will be possible only when more unions join the struggle.