The Police are Bad for Your Health

Police are bad for our health. It is up to all those who strive to improve societal well being to oppose the violence the institution of “law enforcement “continues to perpetrate on us all. 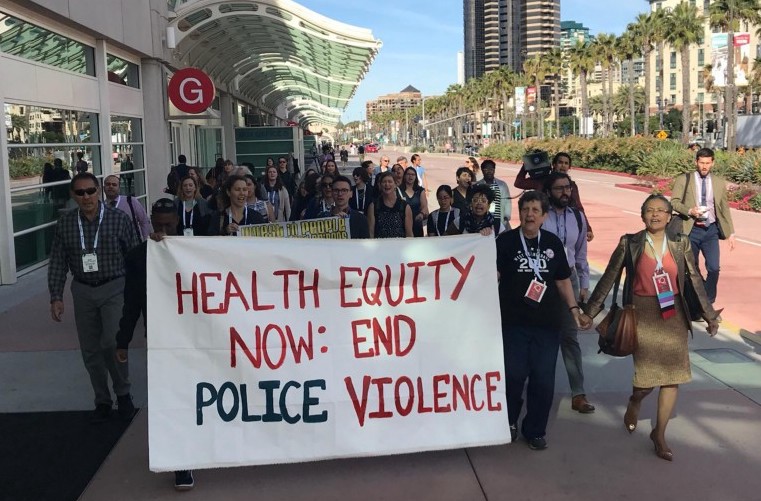 APHA members rally in front of the conference center before the APHA vote on the policy statement. Image From Medium.

I was recently starting an overnight hospital shift, when I received a text from a medical colleague working in a hospital in New York:  “The NYPD are here harassing a gunshot wound victim who is a minor with no family present […] So much so that the family of the patient next door came to us complaining about how they were manipulating [the patient] and twisting his words.”

What are police officers—members of a racist, murderous institution founded on the legacy of slave patrols—doing anywhere near an institution whose one, singularly proposed, job is ostensibly to be addressing the health and well-being of an individual? I am a physician who went into the medical field to better the well being of the public. As I see increasing police presence in our hospitals, health clinics, schools, subways, it leads me to ask the question: Are the police good for our health?

In New York City, Governor Andrew Cuomo’s recent hiring of 500 new police officers to fix “quality of life” issues on the subway is juxtaposed with multiple horrendous episodes of police brutality. This is combined with the police recent harassment and arrest of subway vendors selling churros or candy. We are continually told the police make us safer, but their presence often creates or escalates violence.

Police threaten the health of communities—particularly black and brown communities—in a multitude of ways. Open up the computer or turn on the TV and there is no shortage of cases from which to choose. Recently, Atatiana Jefferson was shot and killed— by a police officer called by a neighbor to do a “wellness check”— while playing video games with her nephew inside of her own home. Botham Jean was recently murdered inside of his own apartment when off-duty officer, Amber Guyger, “mistook” his apartment for hers. The murders of Sandra Bland, Tamir Rice, Michael Brown, Michael Stewart, Rekia Boyd, Eric Garner, Alton Sterling, Quintonio LeGrier, Philando Castile and countless others prove time and again that police are a threat to the literal living existence of black and brown people throughout the U.S. New studies confirm the risk police officers pose to the lives of black and brown people showing “in the U.S., African Americans are 2.5 times more likely to be killed by police than white people. For black women, the rate is 1.4 times more likely.”

While police officers’ use of excessive force disproportionately affects people of color, their excessive use of force threatens the lives of us all. As reported by MintPressNew’s John Whitehead:

In recent years, Americans have been killed by police merely for standing in a “shooting stance,” holding a cell phone, behaving oddly and holding a baseball bat, opening the front door, running in an aggressive manner holding a tree branch, crawling around naked, hunching over in a defensive posture, wearing dark pants and a basketball jersey, driving while deaf, being homeless, brandishing a shoehorn, holding a garden hose, and peeing outdoors.

Unfortunately, examples of police directly killing individuals only touches the tip of the iceberg. It is virtually impossible to cover even a significant percentage of nonlethal police violence perpetrated on the public. Cases such as that of a 15-year-old quadruple amputee tackled and pinned to the ground by a Sheriff’s Deputy in Arizona show officers truly have no limit to the violence will they exact on the public.

The Less Discussed Health Effects of Being Policed

Police officers also serve as a conduit for the country’s ever growing prison industrial complex, again most severely affecting black and brown communities. The U.S. now has the world’s largest prison population per capita, with more than 2 million people incarcerated. Since 1970, the number of individuals in jails or prisons has risen by 700% largely as a result of a racist war on drugs and three strikes laws. This system leads to direct violence and various other forms of trauma for those in prison, while also destroying family and social ties. Regardless of whether a person enters jail or prison, contact with the criminal justice system can affect a person’s employment, housing, and parental rights leading to negative health outcomes. According to New York City Health Commissioner, Dr. Oxiris Barbot, “the data show that involvement with the criminal justice system — even brief contact with the police or indirect exposure — is associated with lasting harm to people’s physical and mental health.”

Studies have shown there are various health effects of mass incarceration spilling over into communities. For example, a 2015 study by Schnittker et al. showed “US states that incarcerate a larger number of people show declines in overall access to and quality of care, rooted in high levels of uninsurance and relatively poor health of former inmates.” Other studies show correlations between aggressive police tactics and negative effects on the mental health of young men.

Furthermore, the trauma and chronic stress that comes with having a loved one abused or killed at the hands of police violence cannot be ignored. Atatiana Jefferson’s father, Marquis Jefferson, died of a fatal heart attack just weeks after his daughter’s killing by the police. After his death, a family spokesman said “I can only sum it up as a broken heart.” Soon after Eric Garner was killed by police his daughter Erica Garner also died of a heart attack at the age of 27.

As medical research has shown, grief-related stress can increase blood pressure and heart rate, while raising blood levels of the stress hormone cortisol, leading to constriction of blood vessels and disruption of cholesterol plaques that line arteries. This leaves individuals at risk for heart attack and other conditions. There is even a medical condition called Takotsubo cardiomyopathy aka broken-heart syndrome where increased stress causes the heart to pump inappropriately. When the police kill or physically harm one member of a community, they are hurting more than just the individual. In the cases of Atatiana Jefferson and Eric Garner, it could be said the police killed two people in each instance.

In the U.S. in particular, police forces have become more militarized which poses health implications of their own. In 1990, faced with a bloated military budget, Congress passed the  National Defense Authorization Act (NDAA). Section 1208—later replaced with the current section 1033 in 1996—of the NDAA allowed the Secretary of Defense to

One of the driving ideas behind this program was a crackdown on illegal drug use in the U.S. There was an idea that if the U.S. wanted its police to act like “drug warriors,” it should equip them like warriors. The program encourages police to employ military weapons and military tactics in communities throughout the US. In their 2017 study, “Militarization and police violence: The case of the 1033 program,” researchers showed that more militarized law enforcement agencies were associated with more police violence and more civilians killed by police each year. The study even found communities with increased militarization have increased numbers of pets killed by police.

Why Are Physicians Still Calling Police for “Help”?

Despite all this, I still hear stories of doctors calling the police into hospital or health care settings. Why the disconnect? This comes partly from the relative position of privilege physicians comes from in the U.S. Physicians tend to come from upper-middle or upper class sectors of society. This makes them less likely to have had the negative interactions with police officers that other communities experience. Physicians are therefore more likely to associate police with their positive experiences even if they have some understanding of the prison industrial complex or mass policing. There is a widespread idea that the police are present “to protect,” so why wouldn’t one call an officer if he feels the need for “protection”?

To Serve and Protect?

For many communities, the police do not exist to “protect and serve.” Instead their presence is associated with terror and violence. Contrary to popular belief, the police officers in the U.S. do not even have the required job of “protecting” the public. The Supreme Court has repeatedly ruled, most recently in 2005, that police do not have a constitutional duty to protect the public from harm. Furthermore officers are in no way trained to appropriately respond to calls for help, even if that was their true desire, as evidenced by their continual violent and punitive responses to requests for help by those experiencing mental crisis.

This begs the question: if the police do not exist to protect the public and continue to threaten the health of communities throughout the country, why do we continue to spend millions of dollars in taxpayer money on police forces? Focusing again on the history of policing can be helpful in answering this question. As Alex Vitale writes in his book “The End of Policing,” police forces were not created to protect the public. Instead, they were organized by propertied classes to maintain control over the “dangerous classes,” i.e. slaves, the poor, or political dissidents. Police today exist to protect the wealthy at the expense of the health and well being of the rest of us, period. The record of “Law enforcement” whether it be the FBI or local police, has shown time after time that this is true. During the 1960s and 1970s, various law enforcement groups through programs such as COINTELPRO targeted left-wing groups such as the Black Panther Party and assassinated community leaders throughout the U.S. More recently, local law enforcement, state governments, and federal agencies coordinated to destroy Occupy encampments nationwide. Civil rights groups like Black Lives Matter were categorized as “security threats” by law enforcement groups in the US.

These dangerous classes Vitale references are any organizations that challenge the power of the corporate elite. This is an often unseen way the police negatively impact the health of the public. By working to subvert, co-opt, and destroy popular movements of individuals coming together to challenge corporate power, the police allow for, and even facilitate, the continued capitalist onslaught in every social area of our society.

The People Are Rising

Fortunately, the public is waking up to police terror’s direct and indirect negative effects on public health. Recent mobilizations of communities throughout New York City to resist racist police terror on the subways are just one example. People are rising and stating openly that the police do not, “serve and protect” and instead are a threat to public health. This phenomenon is extending to countries around the world, where communities are resisting militarized law enforcement agencies that serve only to protect the rich and powerful.

In health care, the role of the physician is to diagnose the source of a patient’s disease and then to combat that source. It is clear that ongoing terror and violence perpetrated by law enforcement agencies is a societal disease hurting us all. Police are clearly bad for our health. The only solution is to eliminate the disease and abolish the police and the racist structures from which they come.

Mike Pappas is a resident physician practicing Family Medicine in New York City. He can be contacted at [email protected]