This afternoon, thousands of Trump supporters from across the country stormed the U.S. Capitol building in an effort to stop the certification of the Electoral College vote. The action began with a rally at which Trump himself encouraged his supporters to march on the U.S. Capitol. Protesters confronted police, broke through barricades, and stormed the […] 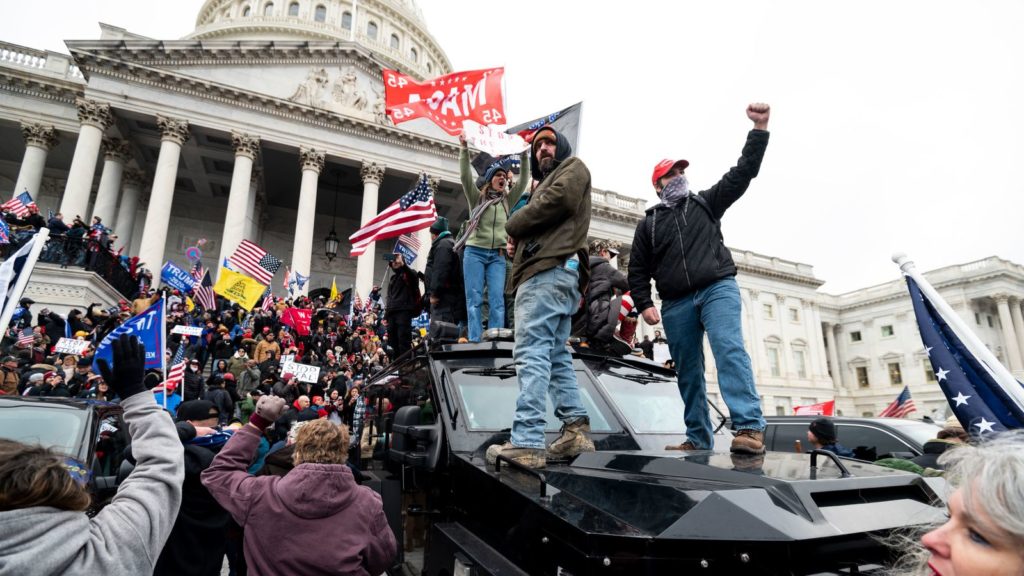 This afternoon, thousands of Trump supporters from across the country stormed the U.S. Capitol building in an effort to stop the certification of the Electoral College vote. The action began with a rally at which Trump himself encouraged his supporters to march on the U.S. Capitol. Protesters confronted police, broke through barricades, and stormed the Capitol building with little resistance from authorities. Demonstrators were egged on by Trump first through addressing them at a rally near the White House, then through a series of tweets where he criticized his Republican colleagues — including Vice President Mike Pence — for not stopping the ratification. This comes after months of Trump denying his electoral loss and holding rallies to rev up his base to dispute the elections. It also comes the day after the Georgia election confirmed Democratic Party control of both houses of Congress.

The international rise of right-wing populism takes its form in the United States around the anti-immigrant, racist, xenophobic rhetoric that has been embodied and emboldened by Trump. The last iteration of this movement comprised opposition to shutting down the economy in order to fight Covid-19, and now we are seeing similar, although much larger, mobilizations around Trump’s false claim that the election was stolen from him.

The experience of this racist, reactionary mass is in direct contrast to how BLM protesters were treated in D.C. when Trump rolled out the National Guard against peaceful protesters for a photo opportunity. This time the National Guard wasn’t even called until two hours into the foray, allowing the far right to break into the offices of Congresspeople. Then, D.C. police brutally repressed BLM protesters, going so far as to shoot tear gas into homes, yet have done little to resist this right-wing attack and occupation of the Capitol. The resistance by the police against the far-right could be hardly described as real resistance, showing once more the relationship between cops and the far-right and fascist forces. In direct contrast to BLM protests, there were no rubber bullets fired, no tear gas dispensed, and no LRADs blared. These facts must be understood in the context of the police showing tacit support for a movement that has defended  their murderous and brutal practices. There is no other explanation for why this racist mob was able to overcome barricades and deeply infiltrate Congress.

Even last year when protesters, some of them joined and led by the BLM movement, were marching to ensure that every vote was counted, they still faced violent police repression. Meanwhile, the “rights” of the anti-democratic movement for Trump to protest have never been questioned, even in cities with Democratic mayors.

Despite those attacks, liberal organizations and union bureaucrats still argued that the movement should put its efforts into supporting the Democrats — the same Democrats who brutally repressed the movement for months.

However, pressuring people to vote was not only a form of liberal co-optation, but also the strategy of centrists on the Left to stave off the rise of the violent far-right movement. The logic behind this strategy is that Trump had to lose the election in order to be destaged and stop his rallying of the far-right. Clearly, that doesn’t work. The far-right is alive and better than ever. Today, it literally forced its way into the U.S. Capitol.

We can’t vote away Trumpism. This is a movement that has been growing as a result of years of neoliberalism that predates the Trump presidency. This epoch of neoliberalism has decimated working people and created a polarization to the left and right, embodied by Bernie Sanders and Donald Trump. Economic and social crises of capitalism left many young white people feeling hopeless, angry, and without options — making them perfect targets for far-right radicalization, which built on already established racism that the country was founded on. This movement rallied around Trump not necessarily because of his position of power, but because he spoke to reactionary populist sensibilities. And even after his loss, he still speaks to those sensibilities and has shown himself as willing to radicalize and confront the Republican Party establishment — a very dangerous Donald Trump free of the “adults in the room” that reined him in during his Presidency. Far-right groups have been utilizing that to boost recruitment and gain influence. This is but the latest example that elections have never prevented the rise of the right-wing.

The electoral strategy has not prepared the working class and the masses of the oppressed in a meaningful way to respond to the rise of the far-right, or beat back the mass, right-wing populist movement of Trump. It never has and it never will. Instead, it has siphoned our energy away from the streets and the workplaces where we have the strength to respond to the attacks by the far Right as well as the capitalist state.

The working class and the oppressed face a real threat. The assault on the Congress is an ultra-reactionary attempt to shut down democratic rights. Of course, no one believes or trusts that the Electoral College (or the Senate) is a democratic institution; all the institutions of the bipartisan regime are rotten. But defending the Democrats is not how we protect our democratic rights.

It’s urgent that the working class break with the Democrats and defend our democratic rights independently from the Democratic Party. We need to call for massive demonstrations in the streets and develop militant actions at our workplaces and in our communities to fight back against the right wing and Trumpism. At the same time, we cannot trust the police or the National Guard to protect our rights and our lives. They work for our class enemy. They are our oppressors. We need to develop our self-defense based on the democratic organization of the working class and the oppressed.

Thousands Protest Against the G7 Summit in Germany