In early December, an impeachment process was opened against President Dilma Rouseff, the current President of Brazil and member of the Workers Party (Partido dos Trabalhadores-PT). Here are some basic facts that everyone should know about the impeachment process, the PT, and recent events in Brazil. 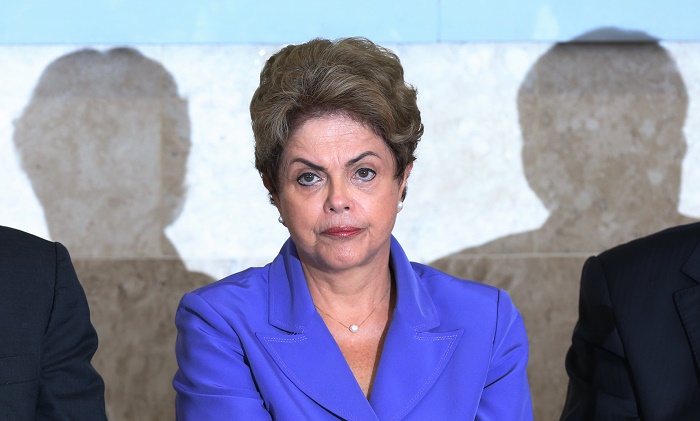 First and foremost, despite being called the Workers Party (PT) and despite the US media constantly referring to the PT as a “leftist party”, the PT’s policies demonstrate that it is neither leftist nor willing to fight for the working class. The PT has held executive power for 13 years now and during times of economic prosperity—the early 2000’s—certainly expanded meager welfare systems, public education, vastly expanded private education, and made credit more easily accessible to the Brazilian people. The economic conditions allowed the PT to help create jobs, although many of those jobs were minimum wage, subcontracted jobs—the most precarious kind of labor. During the years of economic prosperity, the wealthy expanded their profits exponentially. The PT governed in a way that allowed the rich to become much richer, while the working class was given some meager advances in living conditions.

Now, the economic situation in Brazil has changed. Due to the drop in prices for raw commodities, the loss of key subsidies, and the Petrobras corruption scandal, Brazil’s economy has plummeted, making it clear to the population whose side the PT government is on. The PT has instituted a series of cuts and neoliberal measures, from pension cuts to cuts in education and health care funding, to further privatization of the partially nationalized oil company, Petrobras. The PT’s policy is clearly that the working class must pay for the economic crisis—instead of the large companies and corporate leaders.

In 2014, President Dilma Rouseff won the election very narrowly, with just 51 percent of the vote. Today’s Congress is one of the most conservative in recent history, with a rightwing President of the House of Deputies, Eduardo Cunha of the Brazilian Democratic Movement Party (PMDB). The PMDB, a center-right party, has always made alliances with the PT and for most of PT’s 13 years in office. It has governed alongside Rouseff and her predecessor, President Lula. Now, the PT fears the conservative monster it helped create during years of deals and alliances with the PMDB.

Cunha has been at the front of major attacks on oppressed people and workers—supporting further restrictions on abortion and reducing the age of adulthood so that 16 year olds can be tried as adults (although the PT has not offered any true alternative to these plans).

Central to the impeachment effort is the corruption scandal that has touched all major political parties. Corruption within the crown jewel of the Brazilian economy, Petrobras, was discovered in early 2014 and the ongoing investigation has uncovered the participation of almost all major Brazilian political parties, including the PT and the PMDB. Cunha of the PMDB is directly involved in the corruption scandal: millions were found in his Swiss bank accounts.

This money in Swiss bank accounts created a quid pro quo among Cunha and Dilma. The PT held off from bringing a vote to investigate Eduardo Cunha in the Ethics Committee in the Chamber of Deputies. Cunha, on his part, did not bring forward a vote for the impeachment of Dilma. On December 3, the PT decided to change their position, opening an investigation on Eduardo Cunha. On the same day, Cunha decided to open the impeachment process against President Dilma.

It is clear to most Brazilians that this impeachment is purely a chess match between two parties of big business, although it has gained support among many Brazilians who are unhappy with the PT government. The formal reason for the impeachment is not having followed a fiscal responsibility law and using government money to make unauthorized loans to state banks. Yet, this is a law that has not been followed by several current mayors and governors who have not been scrutinized, much less impeached. It is clear that impeaching President Dilma is not about loans to state banks, but rather retribution for the PT’s investigation on Cunha as well as massive public disapproval of Dilma’s governance.

Opening the process against Cunha would clearly bring about the impeachment of Dilma, so why did the PT do it? Some think it is because the Dilma government has suffered so many political attacks that it was better to stop defending her and prepare for the elections in 2018. It is more likely however, that the PT calculated that it was too politically costly not to go after Cunha, as the whole country knows about the corruption scandal. Furthermore, it is very difficult to impeach a President because a two-thirds majority is needed.

This political gamble on the part of the PT has thus far proven to be accurate. Due to decisions made by the Supreme Court, the impeachment process has been slowed and is likely to not go through. On Thursday, December 17, the Supreme Court ruled that the while the Chamber of Deputies has the authority to bring impeachment proceedings, the President can only be ousted by a majority in the Senate.

This makes the impeachment of President Dilma much more unlikely, as the PT has strong political alliances in the Senate and the majority needed to impeach her, would most probably not materialize.

Furthermore, Eduardo Cunha, the chief spokesperson for the opposition, has increasingly become an unviable spokesperson for impeachment due to his own involvement in the Petrobras corruption scandal. In fact, the Attorney General solicited that the Supreme Court remove Cunha from his post as President of the Chamber of Deputies.

The impeachment process has mobilized PT’s base and allies into strong shows of strength. On December 16, there were protests against the impeachment and in favor of “democracy” with 100,000 people gathered in cities across the country. PT-allied labor unions and social movements helped mobilize many of these people.

This protest comes after a year of right-wing protests demanding the impeachment of the President. One demonstration reached upwards of a million people in Brazil, but have since been losing steam. On December 15, the smallest right-wing protests of the year took place with 70,000 people taking to the streets across the country.

As this political theater plays out, the Brazilian economy is tanking; hospitals are closing due to lack of funds, public sector workers are going without their wages, workers are being laid off and huge cuts to education are being made. This political theater, of supposed opposition between Dilma and Cunha hides a key fact—both Dilma and Cunha, and both the PT and the PMDB are united in their belief that austerity measures are needed and that workers should pay for the economic crisis Brazil.

For this reason, workers should not support the Dilma administration. Why fight to maintain the administration that will cut workers’ benefits and public services? Why fight to maintain a government that will make sure that the wealthy continue to reap huge profits while the working class scrapes to get by? However, workers cannot support the rightwing impeachment efforts either, as the right wing will continue the PT’s austerity measures.

It is necessary to build a real workers’ alternative that is, neither with the PT nor the right wing. This alternative must be forged in current anti-austerity struggles and the struggles that are to come. These fight backs against austerity—workers movements and student movements should be united in order to become stronger and understand the crisis as systemic, not as an ephemeral problem suffered by one group of workers.

We also must address the increasing public questioning of the privileges of the elite political caste. So many politicians and political parties have been involved in the Petrobras corruption scandal that it makes it obvious to the public that politicians are corrupt and govern for their own benefit. In order to build on these broad public concerns, workers must impose a constituent assembly to question entire political regime and draft a new constitution; for a short time, the assembly would serve as legislative and executive, creating new rules for government and expressing the public’s concerns about corruption and political privileges. This will not come about without working class and youth imposing a constituent assembly, which questions the executive, legislative political regimes- one in which the working class can debate a way for the rich to pay for the current economic crisis rather than continuing to profit off of it.