The Power of the Working Class: Pilots in Germany Stop Deportations

In 2017, airplane pilots in Germany have stopped 222 deportations. They refuse to take off when deportees are on the plane. This example shows the power of the working class to fight against racism. 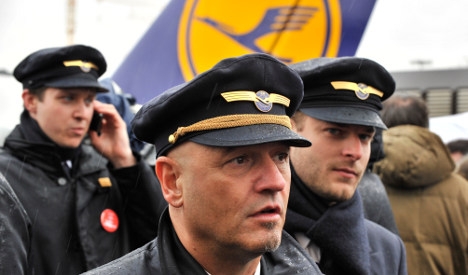 Lufthansa pilots on strike in April 2014

In the first half of 2017, a total of 12.545 people were deported from Germany. But not every deportation was successful. The German government just informed the parliament that between January and September of this year, 222 deportations were prevented because airplane pilots refused to take off. According to the government’s statement, 143 deportations were stopped at Germany’s biggest airport, Frankfurt am Main. A further 40 were stopped in Düsseldorf.

A pilot decides if a flight can start safely. If a passenger is being deported, i.e. forced to travel to a foreign country against their will, then a pilot can refuse to fly.

Pilots especially refused to deport people to Afghanistan. German authorities classify Afghanistan as a “safe country of origin”, despite the fact that the foreign ministry warns against any travel to that destination. German politicians will only travel there in bullet-proof vests, staying hidden behind concrete walls. The German army has been involved in the imperialist occupation of Afghanistan for more than a decade.

When refusing to participate in this state-run displacement, pilots show the enormous power of the working class. When hundreds of anti-racist activists protest in front of an airport, they cannot always stop deportations. But a single pilot can do so reliably.

Pilots in Germany have repeatedly shown their massive social power, with both official strikes and campaigns of calling in sick (wildcat strikes). These strikes have been in defense of their own interests. But pilots can also strike in the interest of the whole working class – refugees, after all, are just the most exploited sector of the proletariat. Deportations just serve to divide our class and worsen the conditions for everyone.

We need unions that organize all workers, regardless of whether they have papers or not. And we need strikes to defend the rights of all workers against racism.