Polls show that support for unions is rising. 60 million workers would join one if they could. At a Labor Day event with the AFL-CIO, Biden outlined his plan to be labor’s “friend in the White House.” But the PRO Act will be betrayed just like the Employee Free Choice Act over a decade ago. Only class struggle will give us our rights. 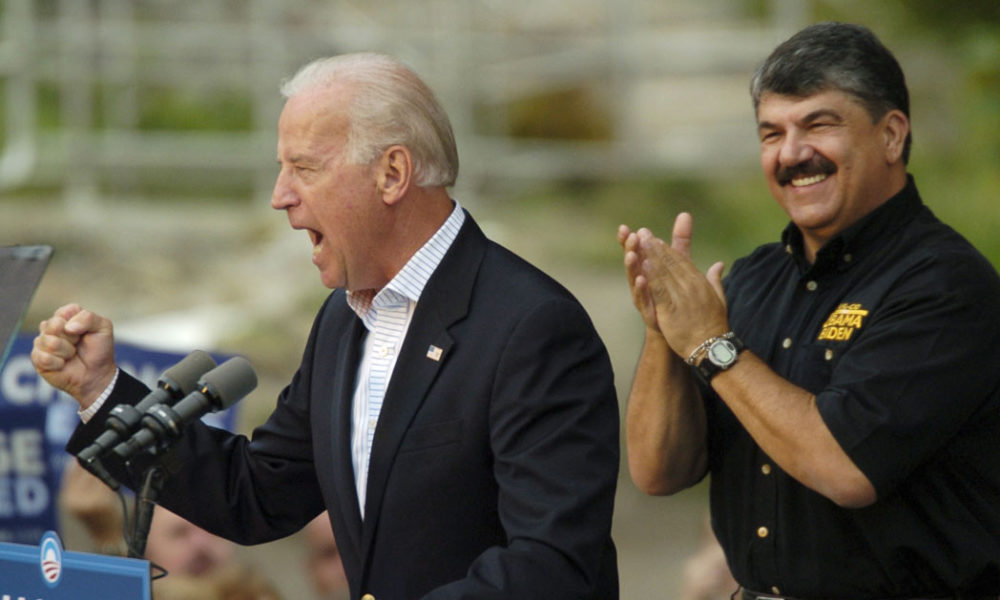 Joe Biden and Rich Trumka at a campaign rally in 2008. Photo: Politico

At an online Labor Day AFL-CIO event, the union federation’s president Richard Trumka spoke with Joe Biden about organized labor and the elections. There were plenty of folksy reminiscing about hard work and honesty, and of course praise for the troops and the American way. Beyond the charade, Biden promoted the Protect the Right to Organize Act as the cornerstone of his plans to be the “strongest labor president [we have] ever had.”

But let’s not forget the Employee Free Choice Act, a bill similarly heralded by the Democrats that was killed in the Obama administration in 2009. Biden was vice president then, why should labor believe him this time around?

First As Tragedy: the EFCA

The Employee Free Choice Act (EFCA) has been proposed numerous times over the years in Congress, and it would amend the National Labor Relations Act (NLRA), also known as the Wagner Act, in three major ways. It would establish a path toward union certification with the National Labor Relations Board through a “card check,” force employers into binding arbitration if a first contract is not settled within 120 days, and more strongly penalize employers who broke the law in trying to stop the union drive through firings and other forms of intimidation. Under the current labor regime, workers have to petition for recognition from the NLRB and employers can, and usually do, insist on an election. This practically means workers have to form the union twice, the first time in signing up coworkers for the petition, and the second in an election. Worse, during the election campaign — that can last for months — the bosses do everything they can to defeat the union drive through threats, bribes, lies, and firings. With the card check rule, if a majority of workers in a workplace sign union cards to become members, then the union is recognized.

The EFCA was passed in the House in 2007, but failed to get the votes necessary to be considered in the Senate. Given the numbers in the Senate, it was bound to lose there. However, the Democrats were able to use the Act as a maneuver to rally unions and the base going into the 2008 election. It was introduced again in 2009 at the 111th Congress. This congress, and the new administration of President Obama, was seen as victories for labor. Unions had, after all, donated hundreds of millions of dollars to the Democratic Party, with SEIU alone donating $85 million and cutting 10% of its staff in order to do so. The support wasn’t just in millions of dollars but also in terms of volunteers for the campaigns. And the payoff was two years of Democratic Party majorities in the House and Senate, including, for some time, a veto-proof supermajority in the Senate. The union leaders thought that their money and hard work would translate into something. With more votes in the Senate, perhaps the EFCA that passed in 2007 would be made law then? Instead, the bill was ignored by the executive and in the end defeated by Democrats in Congress.

The Act was reintroduced in March, 2009 — just a month after Obama and the Democrats handed over $787 billion dollars to the rich — and it was never voted on. Unlike bailouts to the capitalists, even the smallest concessions to workers, are ignored by the Democratic Party. Obama never addressed the issue beyond soundbites here and there, and at a Labor Day picnic that year, he devoted all of two sentences to the Act in front of the assembled 20,000 union members. The Senate Democrats, on the other hand, didn’t just neglect labor, they put together a “compromise bill” that would have removed the card check section. In the end, the EFCA was dropped by the Democrats alongside so many other promises.

Still, throughout that year, the union leaders held out that the Democrats would deliver. AFL-CIO spokespeople were talking about the “strongest labor law reform since the Wagner Act.” Larry Cohen of the Communication Workers of America declared that the administration’s “commitment” was “strong.” Within months, labor leaders were disappointed and forced to lower expectations about the bill. SEIU president Andy Stern started to admit that the EFCA would likely be weaker and voted on months later than expected, and anonymous sources started conceding to the New York Times that the card check would likely be “jettisoned.”

Then As Farce: the PRO Act

Unlike the EFCA, the PRO Act, which was passed in the House in February but has not been considered in the Senate, does not include the card check language. Instead it just shortens the period between the initial petition and the actual election date down to ten days; a timeframe that was previously extended by Trump’s appointees to the NLRB. The PRO Act further purports to eliminate right-to-work laws that exist in 27 states, ban anti-union captive-audience meetings companies use to bully and harass workers into voting against union recognition, legalize secondary boycotts and pickets, and outlaw the hiring of permanent replacements for workers on strike. It would also narrow the classification of independent contractors — giving more rights to “gig” workers — and raise the fines and penalties on employers who break the law.

Though in important ways weaker than the EFCA; it is not negligible. Getting rid of right-to-work laws would be a boon, though it should be noted how little the Democrats have done to stop the spread of right to work. Nevada and Virginia have Democratic governors and Democratic majorities in their legislatures, and still they refuse to repeal right-to-work. A worker would be forgiven for not believing that Democrats would fight now when they haven’t before.

No, the PRO Act will likely share a similar outcome of being watered down and forgotten after the election. The Democrats will have fewer votes against a more intransigent Republican party, all while high unemployment and the overall economic situation gives confidence to the bosses to oppose any concessions.

Biden and the Democratic Party know this, but as is their role, they need to appear as fighting for workers. They need labor’s votes, money, and volunteers. In this exchange, the union leaders also need to appear like they’re doing something in this combined crises of pandemic, economic downturn, and “systemic racism,” the last of which Biden referenced only once. This symbiotic relationship between union bureaucrats and the Democrats was on full display on Labor Day.

How Reforms are Won

Trumka and Biden were right about two things. Support for unions is rising. 65 percent of Americans approve of unions according to a recent Gallup poll. Other research shows that 60 million workers would join a union if given the chance. Reforms to labor law would be helpful to the incipient revival of the labor movement. But the fable that they’re selling is not only wrong, but one they know serves to demobilize workers.

Politicians and union leaders would like us to believe that legal reforms come from their own politicking. Biden gave the usual 1930s mythology that President Roosevelt handed workers the NLRA that built the labor movement. Biden wants the credit, by association with the Democratic Party, for that which was actually won — and bled for — by millions of workers in class struggle. In reality, the massive 1934 strikes in Toledo, San Francisco, and Minneapolis, among others, terrified the Roosevelt administration and the bosses into granting reforms. The NLRA specifically was an attempt at co-opting and hamstringing labor to stop the strikes. Then, as now, workers’ rights aren’t won on the floor of Congress, but as concessions from the bosses to the movement.

That’s how they were gained in the 1930s, and that’s how we must proceed. That means the labor movement must support the not-yet-unionized to unionize, not by handing over hundreds of millions of dollars to the Democrats in the vain hope that they will do what we must do, but by fighting for all workers. Workers are called “essential” now, and there have been millions on the streets fighting against racism, now would be the time for labor to be ambitious. But, this time around, we shouldn’t stop at better laws and more rights, we need a revolution that once and for all gets rid of the bosses. Workers make the world run, we should run the world.