The Racist History of Medical Research

Scientists have talked about using Africa as a testing ground for vaccines against the coronavirus, consistent with a long history of medical experimentation based on racist and colonial oppression. 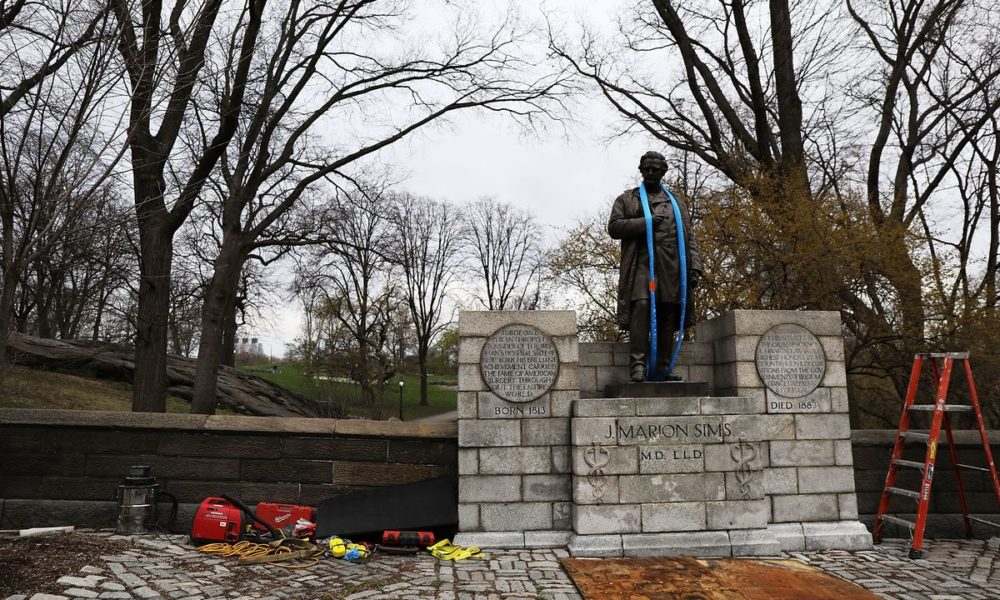 A statue of J. Marion Sims, called the “father of gynecology,” was removed from New York’s Central Park. Spencer Platt/Getty

Last week, two French doctors suggested that a COVID-19 vaccine trial should be conducted on people in Africa. On a French TV channel, the head doctor at a Paris hospital ICU asked, “Should we not do this study in Africa where there are no masks, no treatment or intensive care[?]” Numerous organizations and individuals — from politicians and anti-racism groups to athletes — expressed outrage at the comments. The World Health Organization (WHO) swiftly condemned the statements, with Director General Dr. Ghebreyesus saying that Africa “won’t be a testing ground” and that the French doctors were displaying a “colonial mentality.” The French doctors later offered a tepid semi-apology over their “clumsily expressed” statements.

But these were not “clumsily expressed” remarks: they are consistent with a long history of using Black and Brown people as guinea pigs in scientific research. From the late nineteenth and early twentieth century, capitalist countries’ quest for raw materials and cheap labor drove their expansion into overseas territories, dividing the world among themselves. This brutal conquest and exploitation was justified by racism, and notions of colonized peoples’ inherent inferiority and disposability — a “colonial mentality,” in the words of the WHO’s Dr. Ghebreyesus.

As historian Helen Tilley notes, following the establishment of colonies in the Global South, medical services and infrastructure were developed and went “hand-in-glove” with scientific research. Colonized people therefore served as research subjects from the beginning of imperialism. Racist pseudo-scientific beliefs flourished to rationalize experimentation in particular, for example about Black people’s higher pain tolerance (a belief that some continue to endorse). The French doctors’ recent statements thus reflect long-standing racist beliefs about Black and Brown people’s expendability, and show that the medical establishment is happy to continue to exploit them for research.

Centuries of imperialist exploitation has also led to material conditions that have reduced barriers to research and lowered the cost of clinical trials. Countries in the Global South have laxer regulatory safeguards, and less red tape than does research in the Global North. These countries typically lack the resources and local expertise to maintain ethical review committees, leading to minimal oversight. Compensation for participation is low, and sometimes nonexistent for illness or death. Labor and infrastructure costs are significantly lower than in the Global North. Similarly, many of the countries which are popular locations for clinical trials also have relatively high rates of illiteracy and poverty, which often increases people’s willingness to take part in research that presents a unique opportunity to support their families and receive treatment that would otherwise be out of reach.

Importantly, these conditions are not intrinsic characteristics of imperialized nations or accidents of geography, nor are they — as some claim — consequences of developing nations underfunding research. Rather, as Guyanese academic and anti-imperialist Walter Rodney argued, underdevelopment is a direct result of capitalist expansion and imperialism. Development in the Global North came at the expense of colonized nations, and imperialist extraction siphoned wealth from the Global South while preventing these nations from developing their economies. This imperialist plunder continues today, and has created the material conditions that favor research in formerly colonized countries.

Racist Experimentation in the United States

Black people in particular have been exploited for medical research throughout U.S. history. In an interview with Time Magazine, medical historian Harriet Washington points out that we do not appreciate the scope of research on black Americans, and that there is “no sphere of American medicine that was not touched by the use in research of African-Americans.” Perhaps the most well-known case is the Tuskegee Experiment, where 399 black men in 1932 with syphilis were deceived into thinking they were receiving treatment for their condition. In reality, the men received placebo treatments so that researchers could study the disease’s progression. The “experiment” was halted in 1972, nearly 30 years after an effective treatment for syphilis was discovered.

However, as Washington notes, the Tuskegee Experiment is notable for its recognition by the government, rather than for its brutality. The full list of horrific experimentation on African Americans is unfathomably long and ultimately unknowable. Prior to the nineteenth century, Western medicine was dangerous, and “treatments” included poisons such as arsenic, and forced bleeding and vomiting. Slaves, seen as particularly expendable during the slave trade, bore the brunt of the torturous “research” into these remedies.

In the early 1800s, when the U.S. imposed a ban on the importation of slaves, slave-owners had to depend on domestically sustained slavery and became more concerned with maintaining their slaves’ health. The interests of slave-owners aligned with doctors who received a steady supply of dehumanized bodies on which to experiment, and gynecologists in particular benefited from the pressure for slaves to reproduce. The majority of early gynecological advances were derived from nonconsensual experiments on black women. J Marion Sims, the “father of gynecology” — inventor of the vaginal speculum and treatments for various childbirth complications — forcibly experimented on a group of black women, performing 40 painful surgeries on one woman alone. Only in 2018 did New York City remove a statue honoring the doctor.

As Washington describes in her book Medical Apartheid, African Americans continued to be subjected to torturous experimentation well into the twentieth century. This research includes forced sterilization and long-term contraception, brain surgery on young boys, injections of different viruses on prisoners, and application of painful dermatological chemicals. Even in death, African Americans could still be subjected to experimentation and anatomical dissection.

Recognizing the dangers posed by human research, particularly following revelations about experimentation during World War II, regulations and guidelines were implemented in the latter half of the twentieth century. In 1964, the World Medical Association adopted the Declaration of Helsinki’s guidance for ethical medical research on human subjects, a document which has been revised multiple times to further increase safeguards. (Notably, the U.S. Food and Drug Administration has removed all references to this document in their own regulations).

In spite of these guidelines and the end of overt nonconsensual experimentation on black Americans, examples abound of unethical research on Africans and in the Global South. In 1996, Pfizer improperly conducted a trial for an experimental meningitis antibiotic, leading the company to pay settlements to the families of the children who died. Around the same time, numerous HIV trials raised ethical concerns when participants received placebos instead of supported treatments, and reported adverse effects which were ignored.

Ethically dubious research has continued into the twenty-first century. A BBC article from 2012 asks, “Have India’s poor become human guinea pigs?” about revelations that Indians from the bottom of the caste system participated in research without their knowledge. During the 2014 and 2016 Ebola outbreak, over 250,000 blood samples were drawn from West African patients who did not give informed consent to participate in research. The international laboratories who took the samples now refuse to release them or disclose how many are left. This is just a small sample of unethical research practices conducted in the Global South by multinational corporations in the Global North. Considering the vigor with which these corporations guard their research, there are undoubtedly more cases where misconduct may never come to light.

Importantly, people in developing nations often do not reap the rewards of medical research. The WHO has found that over 19% of children globally do not receive vaccines for diseases such as measles, largely due to barriers caused by poverty. The clinical research boom in India only began in 2005 after new patent laws — a condition for membership to the World Trade Organization (WTO) — restricted the availability of generic drugs and increased licensing fees, a victory for multinational drug companies that made many drugs prohibitively expensive for poorer Indians. Countries which flout patent laws to provide life-saving medication face the wrath of multinational companies, the WTO, and politicians. In 1999, South Africa faced fierce opposition for bypassing patent laws to provide cheap drugs during the AIDS epidemic. As these cases show, the lives of people in the Global South are necessary sacrifices to be made at the altar of profit maximization.

Some developing countries, such as India, have tightened regulations in response to death and disease caused by substandard pharmaceutical research. In 2014, as part of a clinical trial for an experimental vaccine against rotavirus — a viral disease responsible for over 3% of deaths in children under five globally — over 2,000 children in India were injected with a placebo treatment rather than an alternative vaccine that was already available. Tellingly, in response to these increased regulations, the head of the Association of Clinical Research Organizations responded that clinical trials “can be relocated to more hospitable countries to mitigate the direct economic damage,” highlighting that concerns lie primarily with economic, not human, cost.

In a market-driven system for developing medical treatment, where drug and vaccine trials are primarily conducted by multinational corporations who are pressured to produce findings and cut costs at every step, unethical research practices will flourish. Racism and the long history of experimentation in imperialized countries will ensure that Black and Brown people bear the brunt of this unethical research. A system that prioritizes profit maximization and shareholder value will find ways to circumvent regulations and thwart any revenue-threatening attempts to protect research participants. In spite of increased regulations in recent decades, we are far from the end: in 2015, management consulting firm (and capitalism gospel-spreader) McKinsey & Co. declared Africa a “continent of opportunity for pharma and patients.”

The road to medical discovery is paved with the lives of countless Black and Brown people from formerly colonized nations. The COVID-19 pandemic requires action on a global scale and, as the French doctors’ remarks show, corporations and governments in the Global North could easily use this crisis to continue exploiting these individuals. Pharmaceutical companies and medical research should be put under the democratic control of workers, scientists, and doctors, free of the profit motive that encourages exploitation of research subjects. We must also enable countries in the Global South to develop their own research infrastructure to protect local participants, and demand an end to the imperialist extraction and under-development that has plagued the Global South for centuries. This expropriation would allow both science and the means of production to be put in the service of all of humanity, and make it possible to conduct research into the many diseases that get neglected by Western companies. Medical research should be ethically conducted and used for the common good, including for people in the Global South who are more likely to be victims of research than beneficiaries of its findings.