The fire which completely destroyed a low-income housing tower in one of London’s richest areas is an example of the murderous effects neoliberal policies can have on the working class. 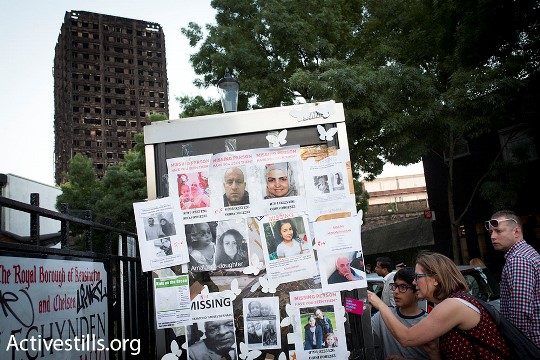 The burned skeleton of Grenfell Tower looms over the neighborhood like an alien object from a dystopian film, sealed off from all directions by Britishly polite but earnest looking police officers. Residents and visitors wander around in disarray, snapping another picture of the site of last week’s horror with a phone. In this enclave of poverty inside Kensington and Chelsea, London’s richest borough, makeshift memorials are set up, white placards filled with densely written messages of remembrance. Over the flowers and candles hang dozens of pictures of missing persons, some of the smiling faces already crossed out crudely or with the letters “R.I.P.” sketched over them. The fire, which apparently broke out on the fifth floor around 1 am on Tuesday night, needed less than ten minutes to reach the top floors. It’s safe to assume that any person still missing did not make it out of the inferno alive. The posters are all obituaries.

On Friday evening, a protest erupted in front of the Kensington and Chelsea town hall. Residents broke open the doors and stormed inside with calls for justice. They later set up a people’s assembly outside before marching to the torched building. The tense atmosphere reminded many of the mood before the riots of 2011, as the killing of 29-year-old Mark Duggan in North London triggered a week of protests and looting all over England. On Saturday, however, the mood seemed to shift into quiet mourning, perhaps also due to the unusual heat and the Ramadan fast. The volunteers were working quietly in the mosques and churches as residents and visitors were lighting candles and conversing amongst themselves.

“Why is it that we are only getting a certain death toll when everyone here knows that the firefighters didn’t even get past the 15th floor?” asks Paul, a resident from the fifth floor who managed to escape the 24-storey building. “Because they know if the papers come out with the real numbers right now, people are going to react.” With the official numbers still around 60, unofficial reports from the fire department place the final toll well in the three-digit range. Considering the number of large families, as well as visitors for Ramadan or undocumented sublets, this estimate seems reasonable.

The rail stations around the building were closed on Saturday for “safety reasons”, further cutting off the area. This means one has to walk from nearby Notting Hill Gate, one of the poshest and richest areas of London. The 20-minute walk past artisanal pizza shops and clothing boutiques makes the underlying circumstances of the catastrophe visual and apparent. “We can’t afford to go to our own high road anymore” says a resident. “Our families are being forced out because they’re upping our rent and selling off our houses, to the point where it’s become corporate murder”. Pointing to the charred building, another adds: “As soon as the cameras are gone, all of this is going to become private flats.”

The fire in Grenfell Tower is the high-octane gentrification of London blowing up in its face. The building has been a thorn in investors’ sides for decades, and recently received a refurbishment – but instead of a sprinkler system, it received a high-polish facade to make it more attractive to its high-class neighbors. The managing company opted for a cladding that cost $2.50 less per square meter – made from highly combustible material. “The fire went through the cladding like paper” remembers Paul when describing his escape.

The conservative media is busy calling for people to “not politicize the tragedy”, but the British working class is not so easily fooled. They are well aware that this tragedy is an attack on them, brought on by gentrification, neoliberalism and years of austerity and cuts. Labour Party leader Jeremy Corbyn has demanded immediate solutions: “There are a large number of deliberately kept empty, vacant flats and properties all over London. It’s called land banking,” he said. “Occupy it, compulsory purchase it, requisition it. There’s a lot of things you can do.”

In this case, Corbyn is absolutely right. However, it is safe to assume that the conservative government, still struggling to form a coalition, will not soon nationalize real estate. With the Brexit negotiations beginning Monday, chances are Theresa May would prefer to bury the affair as deep as possible. It would be wise for the Labour Party and its base to use the momentum from the election and their expanding grassroots networks to mobilize for the squatting of empty flats and their distribution to the Grenfell survivors, assuring that they could stay in their neighborhood.

On the makeshift whiteboards next to the tower, a message is scribbled next to a missing person’s picture: “The one who dies by burning is a martyr.” British capitalism’s war on the poor and the migrants has brought on hundreds of new martyrs last week. They should not be forgotten – they will be avenged.