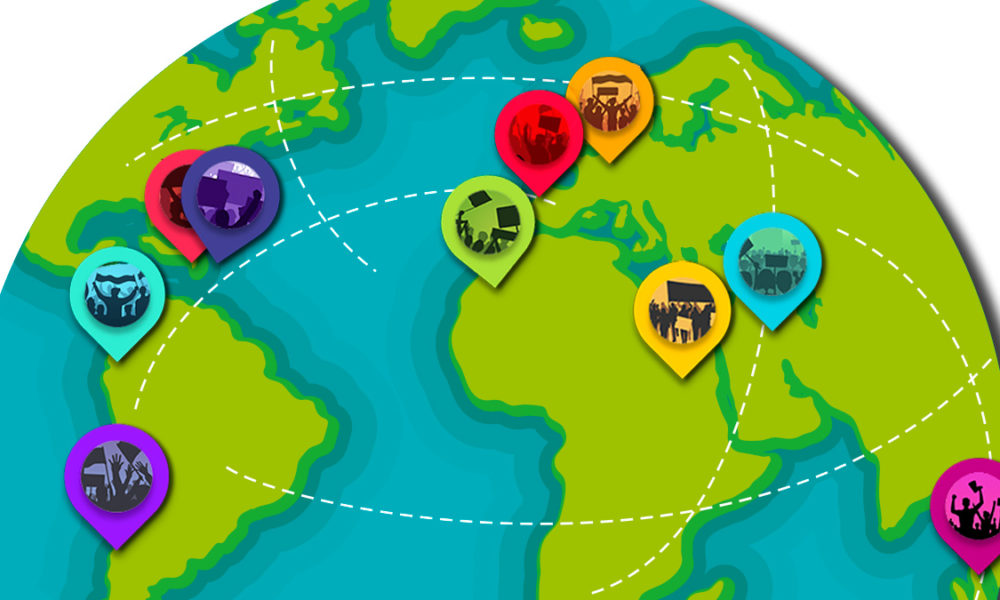 Hundreds of thousands, perhaps millions, rose up in Algeria and Sudan against the everlasting dictatorships that serve imperial masters, breathing a second life into the “Arab Spring.” In Iraq, devastated by 15 years of war and the U.S. occupation, massive protests broke out against unemployment and poor living conditions; these lasted four days, despite that the repression left more than 100 dead. We see something similar in Lebanon, where an angry crowd demanded the end of the Hariri government.

On the other side of the world, thousands have protested for months in Hong Kong, that business paradise where social inequality has reached intolerable levels for the overwhelming majority of the population.

In Catalonia, the independence struggle has reactivated. There is a genuine rebellion underway against the reactionary Spanish monarchist regime that intends to punish the leaders of the Catalan independence movement with more than 10 years’ imprisonment.

This wave of protests has now hit Latin America and signals a change in the political situation. In Puerto Rico, a popular uprising toppled the government and challenges U.S. colonial rule. In Haiti, the hemisphere’s poorest country, an intermittent revolt against the government of Jovenel Moïse has gone on for months.

The point here is not to enumerate these protests, but rather to show that those at the top are less and less able to govern those at the bottom, who are increasingly angry. In every case, the capitalist governments have responded with fierce repression. Meanwhile, the corporate media and the intellectuals who serve the exploiters demonize those who rebel, accusing them of violence and of “plotting coups.” This reaction by the ruling classes, their states, and their ideological apparatuses confirms yet again that protests have the potential to open a revolutionary dynamic, and that the only way for governments to shut them down is to strike back first and only then consider what concessions to make.

These diverse processes, which combine both democratic and social demands, share a common origin in the organic crises unleashed by the capitalist crisis of 2008 that ended the neoliberal hegemony of the previous decades and left as its inheritance a deep social and political polarization, one in which the “losers” of globalization are up against a small minority of winners. Our times are marked by an obscene concentration of wealth at the very moment that most people are seeing their living conditions decline, particularly young people who have only a precarious future ahead of them. As a result, there are deep divisions within the ruling class: from the crisis of the parties of the “extreme center”—that is, the liberals and social democrats who built the neoliberal consensus—have emerged aberrant phenomena such as Trump and Brexit that exacerbate nationalist tendencies. Trade wars, especially the U.S. trade war against China, are slowing down the international economy. But there are also new political phenomena on the left and, above all, new processes of class struggle. It would be an impressionistic mistake to measure their impact in the short term; on the contrary, these are deep processes—not just conjunctural ones—that are likely to have lasting political consequences.

The dynamics of the events taking place in Latin America merit their own paragraph. There, the national bourgeoisies and U.S. imperialism, under Trump’s command, had rushed to celebrate the return of the region’s right after a cycle of “populist” governments had been exhausted. Macri in Argentina, Piñera in Chile, Duque in Colombia, and the extremely right-wing Bolsonaro in Brazil seemed to confirm that the pendulum had swung back to the right for a time. They were preparing new neoliberal attacks, privatizations, and IMF austerity plans. They even attempted a coup in Venezuela so that the rancid, pro-imperialist right of Guaidó could capitalize on the discontent with Maduro’s authoritarian government. But quite early on, these governments began to show the limits of their ability to carry out their reactionary programs.

Today, without a doubt, the most advanced class-struggle processes on the continent are the “revolutionary days” in Ecuador and Chile. Their magnitude, radicalism, and violence remind us of the uprisings that brought down the governments of the neoliberal right at the end of the 1990s and in the early 2000s.

In Ecuador, we have just witnessed a popular uprising—mainly of workers, indigenous peoples, peasants, and students—against the IMF plans that forced Lenín Moreno to withdraw his austerity Decree 883. This is an important victory, but only partial—largely because of the role played by the leaders of the mass movement, particularly the Confederation of Indigenous Nationalities of Ecuador (CONAIE), which in the course of the mobilization throttled the demand to bring down the government. The situation remains dangerous for the bourgeoisie. Moreno has survived, but his government remains very weak in the face of a mass movement that has now seen that the only way to defeat the austerity plans is to fight.

In Chile, an increase in public transit fares detonated the accumulated hatred for the government of Piñera and is calling into question the legacy of the Pinochet dictatorship. After a day of street fighting and mobilizations that challenged the state of emergency, Piñera canceled the fare increase, but it remains to be seen whether so minimal a measure by a battered government is enough to halt the dynamic of the uprising.

The mass movement’s entrance onto the scene and the street protests in neighboring countries will undoubtedly influence the government that emerges from the upcoming elections in Argentina—which at this point will almost certainly be Peronist—with respect to its task of applying the austerity plans the IMF requires. It even calls into question Bolsonaro’s neoliberal war plan in Brazil.

The capitalist crisis had already given rise to the first processes of resistance, such as the general strikes in Greece and the Indignados movement in the Spanish State. Various neoreformists ended up contributing to the defeat of these movements, such as Syriza, which carried out the austerity plans of the European Troika, and Podemos, which allowed for the recomposition of neoliberal social democracy in the form of the Spanish Socialist Workers Party (PSOE).

This return of the class struggle, with genuine popular rebellions that defy bourgeois legality, opens up new perspectives for the construction of a revolutionary, anti-capitalist, working-class, and internationalist left, which cannot develop without phenomena of this kind.

In this context, the preparatory tasks the Party of Socialist Workers (PTS) in Argentina has been carrying out take on a new significance: our political presence in the life of the country via the Workers Left Front—Unity (FIT-U); our intervention in different events of the class struggle; the launching of the online newspaper La Izquierda Diario; and the theoretical and strategic preparation of a militant force to intervene at decisive moments. At the international level, we and the sister organizations of the PTS that make up the Trotskyist Fraction—Fourth International have promoted the international network of newspapers in eight languages, which is active in the main events of the class struggle: in France, Revolutión Permanente has become one of the voices of the struggle of the yellow vests, just as La Izquierda Diario in Chile today gives a voice to those resisting Piñera’s state of emergency. And in Barcelona and the Spanish State, we are there in the mobilizations and the fight against the reactionary offensive of the monarchist regime, reporting on all the events through both IzquierdaDiario.es in Spanish and EsquerraDiari.cat in Catalan.

Given the ominous forecast of a new global recession and in the context of growing conflicts between the imperialist powers and increasing nationalism and militarism, there will be more and more people’s uprisings. We must prepare for a period in which mass action gives rise to pre-revolutionary or directly revolutionary situations, as well as to counterrevolutionary coups. More acute forms of class struggle are here to stay.

First published in Spanish on October 20 in Ideas de Izquierda.