Thousands of military and police are controlling the streets of Bolivia in preparation for mobilizations on January 22, the anniversary of the Bolivian constitution and the date on which Evo Morales would have finished his term as President. 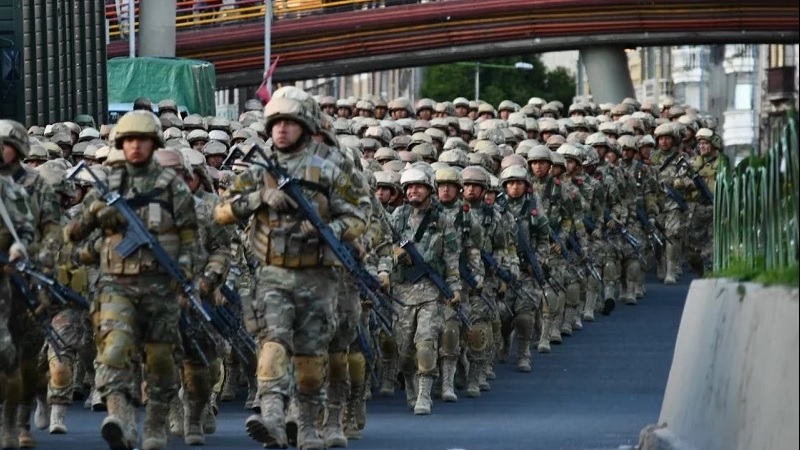 It has been two months since a right-wing coup ousted Bolivian President Evo Morales with the help of the US-controlled Organization of American States (OAS). The anti-indigenous and hyper-religious right took power, burning indigenous flags and removing indigenous symbols. The “interim President,” Jeanine Áñez Chávez, was not democratically elected but was sworn into a half empty Congress and left the chambers holding a comically oversized Bible and promising to bring God back into the government. Meanwhile, outside Congress, indigenous workers and peasants participated in massive mobilizations created self-defense committees to protect themselves from right-wing mobilizations and the armed forces. These were repressed heavily, resulting in the deaths of at least 38 people by government estimates.

In the midst of the mobilizations, Evo Morales left the country, first fleeing to Mexico and then beginning a process of getting political asylum in Argentina. Rather than encouraging the resistance, in the midst of the protests Evo Morales tweeted, “I ask my people with great care to respect the peace and not fall into the violence of groups that seek to destroy the rule of law. We cannot fight among Bolivian brothers. I make an urgent call to resolve all differences with dialogue and discussion.”

Since then, the mobilizations have died down and the coup has advanced. Morales has been accused of terrorism and sedition by the coup government, and an arrest warrant has been issued against him. The courts are deciding whether or not the MAS, Evo Morales’ party, will even be allowed to run in the upcoming elections. Now Bolivia has been militarized in preparation for potential demonstrations on January 22, the anniversary of the ratification of Bolivia’s constitution, as well as the day Morales was sworn in as President.

On January 22, the Congress accepted Evo Morales’ resignation: two months and 11 days after he was coerced to give the resignation in the right wing coup that ousted him. Evo Morales’ party, the MAS, holds ⅔ of the Parliament, but a sector of them broke ranks to vote in favor of accepting the resignation. Only a few days ago, the same Congress approved the extension of the coup-President’s term: Añez’s term was scheduled to end today, but now she will remain in power until elections are held in May.

Last week, Evo Morales made a very controversial statement on the radio show “Kawsachun Coca,” owned by the coca planters union. “Before long,” he said, “if I return to Bolivia, we will have to organize popular armed militias, as Venezuela has done.”

And then came the backlash from the Bolivian right sectors, as well as sectors of his own party, the MAS. The statement was even controversial internationally, putting his stay in Argentina at risk. The Argentine Union Civica Radical Party (UCR) presented a bill to reject Morales’ refugee status in response to his statements about the militias.

Faced with such a risk, Morales went back on his words, claiming he didn’t want people to arm themselves with guns and that he wanted actions “within the framework of our uses and customs, and respecting the Constitution.” The UCR said that “if no new statements of this nature occur, they will not insist on the treatment of the bill presented.”

In a press conference Defense Minister Luis Fernando Lopez said, “Bolivia’s people are hurt, and our armed forces outraged.” He said Morales was using “an absolutely terrorist and seditious logic.”

Predictably, the right wing took advantage of Morales’ statements, using it as an opportunity to militarize the country in preparation for mobilizations called by social movements and labor organizations led by the MAS. As early as January 16, the police were performing drills in the center of La Paz.

Huge mobilization of the Bolivian military in the center of La Paz, outside San Francisco cathedral.

In six days, social movements will be protesting here against the coup. pic.twitter.com/CxUqdV44rv

Police drove through cities with machine guns sticking out of tanks and armored cars. 70,000 police have been mobilized to contain and intimidate potential unrest.

It is important to note that the police have played a key role in the coup—and they have been handsomely rewarded for it: Añez brought their salaries up to the same pay rate as the military. Even the UN had to take notice:  “It seems like the police is following the instructions of the far-right in Bolivia,” said United Nations Special Rapporteur Alfred de Zayas.

Since taking office, Añez begun a privatization program. She also invited the Israeli Defense Forces to train the Bolivian security services and yesterday she ordered  the closure of Bolivia’s “Anti-imperialist military school” and opened a military school called “Héroes de Ñancahuzú,” in honor of the people who assassinated Che Guevara.

The right wing’s hypocrisy is clear. When they were running against Morales, they talked about democracy and the right to an opposition. Today, their so-called democracy comes hand in hand with repression, militarization, persecution, vindictiveness and, in general, the threat to and violation of the most basic democratic rights, such as the right to free expression and the press.

The massacres of Sacaba, Senkata and Ovejuyo left, according to official figures, 38 families in mourning; hundreds of people were injured, and more than a thousand arrested and imprisoned in November. Today, about 150 young people are still in prison, accused of sedition and terrorism, among other things. In the midst of expulsions of Cuban doctors and foreign journalists, they recently announced that almost 600 former officials of the previous government are being investigated under the cover of “scandalous corruption” that is said to have been committed in the past 14 years.

Along with the militarization of the country, the state administered by President Jeanine Áñez has been covering up and protecting semifascist paramilitary groups, such as who appear in a video published by Bolivia Al Airte TV below. These groups call themselves “the resistance” (the “pititas”). These paramilitary groups are made up of the Unión Juvenil Cruceñista (UJC), the Resistencia Juvenil Cochala (RJC), among others, and they act in broad daylight. In fact, Áñez provided them with 15 motorcycles that they had lost during their attacks on indigenous women and anyone who might resemble a member of the MAS.

There is a Bolivian expression that says that you shouldn’t show your fist to a rival after fleeing from a fight. There is no other way to interpret Morales’ statements.

After his departure from the country, resistance to the new regime was completely spontaneous, even against MAS leaders from different neighborhoods and municipalities. Most important was the mobilization of the people of El Alto who fought the coup, some dying in the repression. They fought despite the lack of support from Morales and the MAS. Now that the mobilizations have been repressed and the peak has passed, Morales talks about militias—now that the embryos of militias have been disbanded.

In this context, the Bolivian courts have not yet decided if the MAS will be allowed to run in the upcoming elections, yet another repressive and anti-democratic aspect of the current regime.

These signs of the regime’s hardening highlight the profoundly reactionary nature of the movement initiated on October 20 by churches, civic groups and the agro-industry. The political right knows that the general elections on May 3 could be lost to the MAS even with its main candidates outlawed. This fear of losing at the ballot box what they have won with the police and the army leads them to militarize “democracy.”

In a statement, the LOR-CI, a socialist group in Bolivia, said:

In the face of the mobilizations of Jan. 22, we rejected the government threats and defended the democratic right of the peasant communities, neighborhood councils, social organizations and working sectors to mobilize. We at the LOR-CI do not commemorate January 22 since the Plurinational State is the result of the MAS pact with the agro-industry and the “media luna” [half moon, referring to the departments of Santa Cruz, Beni, Pando and Tarija, which largely opposed the Morales government]. We are fighting for a workers’ and indigenous peoples’ state, one that advances in the construction of socialism. This Jan. 22, however, we also defend to the end the democratic right of those who want to claim and commemorate the Plurinational State, today threatened by a racist, clerical, police, military and fascist “republican” clique.

Would you like to contribute to Left Voice? Please send us your articles, photos, and videos. Also, if you are interested in translating from Spanish, Portuguese, French, German, Italian, or other languages, please get in touch. [email protected].org