On this day in history, the Saigon Commune was created. With the end of World War II and Japan’s surrender to the Allies, the Japanese occupation of Vietnam also ended. Soon thereafter, revolutionary workers in various parts of Vietnam rose up in an insurrection against reoccupation by French imperialism — but also against Stalinist repression. Trotskyists played a central role. 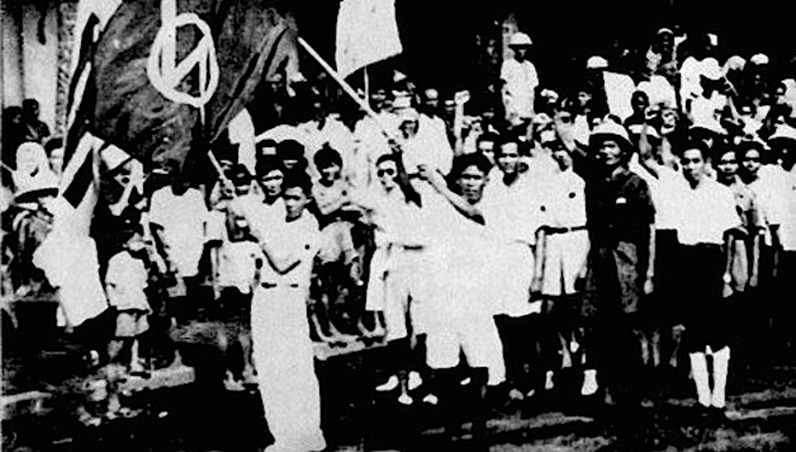 Japan’s surrender to the Allies in World War II, announced in August 1945 and formalized on September 2 of that year, brought big changes to Vietnam. Japan had occupied the country during the war after driving out the French colonizers. On the day Japan signed the documents, Ho Chi Minh — leader of the Indochinese Communist Party (PCI) — and his new organization the Vietminh (Front for the Independence of Vietnam) proclaimed the Democratic Republic of Vietnam (DRV). That took place in Hanoi, in the country’s north. At the time, in the coal region northeast of Hanoi and north of Haiphong, some 30,000 workers had already taken over the mines, transport, and public services and were running them with elected councils based on equal wages for all work. Ho Chi Minh’s forces moved quickly to integrate these councils into the military-police structure of his new republic, under party control.

A week earlier, the Vietminh had declared its own provisional administration in Saigon, the largest city in the country’s south. This Southern Administrative Committee undertook to disarm the Japanese, but did so by aiding the British military — Ho Chi Minh’s “democratic allies” during the war, according to the Stalinist formula of alliances with the bourgeoisie and imperialism — to secure landing and bivouacking positions in that part of the country. This enraged workers and youth, who demonstrated and demanded to be armed.

At the center of this were the Trotskyists of the International Communist League (ICL). The group traced its origins back to the Left Opposition in the world communist movement against Stalin’s destruction of the Communist International. Its members had been arrested and their predecessor organization had been banned when the war broke out, but it had reemerged a year earlier with the ICL name. The ICL helped organize committees that took power in more than 150 towns. Saigon itself had a number of these committees spread across the city, but an effort by the ICL to organize them in a citywide assembly was crushed by the police, with the support of the PCI.

When workers and youth rebelled against the reinstitution of colonial rule in Vietnam, the ICL was at the center. ICL members propagandized under the slogan “Land to the Peasants! Factories to the Workers!” With a restoration of French colonialism looming, aided by British weaponry, the ICL established a Popular Revolutionary Committee that functioned, as one participant later wrote, as an “embryonic soviet” (council). They fought for independence from the PCI and decision-making autonomy for Vietnamese workers and peasants in the Democratic Republic of Vietnam Ho Chi Minh had declared.

The DRV lasted only 20 days, at least as a government in the entirety of Vietnamese territory. On the night of September 23–24 , 1945, aided by the British, the French expeditionary forces — the former “democratic allies” of Ho Chi Minh’s Stalinist party — overthrew the local DRV government in Saigon, seizing police stations, the post office, the central bank, and city hall. They met no resistance, and declared French authority throughout the south of Vietnam. But as the sun came up, news spread, and working-class districts of Saigon and the surrounding poor suburbs began to organize without leaders or any directive. Barricades were set up to keep the French and Gurkha troops (British officers were commanding ethnic Nepalese soldiers from colonized India) from establishing strategic positions. The French — working with the remaining Japanese troops — took control of Saigon’s center, but rebels had a firm grasp most everywhere else. These rebel forces included Trotskyists, unaligned members of the popular committees, and even some renegade Stalinists. Notably absent were the Vietminh; they wanted “law and order” and were already planning to negotiate with the French and British to regain power.

The insurrectionists made incursions into the city center, setting fire to buildings and warehouses and even attacking the port where the French and British had begun their colonialist expedition. Some revolutionary groups managed to organize a march on some key boulevards in Saigon. Electricity and water supplies to the city were interrupted. As the French sought to solidify their control, supply routes were disrupted.

These efforts were not unleashed exclusively to fight the French. The workers’ militias that fought these battles, and the groups that marched, aimed to protect and solidify the advances workers had already made to establish themselves in power after the Japanese occupiers were thrown out. Hence, the events that began on September 23, 1945 came to be known as the Saigon Commune.

Ho Chi Minh and the Vietminh’s response to all this was not to support the popular fight, or to arm the insurrectionists, but to propose a blockade of the harbor to “starve out” the French as a way to force them to the negotiating table. The British, who had complete control over access to the harbor, knew that would be a doomed effort. But Ho did get his wish for negotiations, and after a “truce” was announced on October 1, talks began. A few days later, a French general arrived with new expeditionary troops with a mission: restore order and build a strong Indochina as part of the “French Union.” The French flag, hated throughout Vietnam, flew again in Saigon, and the Vietminh negotiated what can only be described as an appeasement with imperialism. A little more than a week later, French and Gurkha troops launched a general attack against rebels circling Saigon, killing fighters and civilians alike and burning down their villages of huts.

Stalinists in League with Imperialism

The Vietminh had repressive work to do, too. They turned their attention on the councils and on the Trotskyists, unleashing a reign of terror. Trotskyists were rounded up and shot. Workers who had built councils and then participated as militias in the insurrection were forced to become part of the Vietminh’s “Worker Saviors of the Fatherland” grouping; those who refused were isolated, lost work, and often were executed. Ho Chi Minh’s Stalinists — like Stalinists throughout the world — demonstrated a greater interest in dealing with critics from the left than in fighting the imperialists.

French socialist Daniel Guerin later wrote of a conversation he had with Ho Chi Minh in 1946 in Paris, where he asked about the fate of Tạ Thu Thâu, one of the central leaders of the Vietnamese Trotskyists since 1930. He had been released from prison in April 1945 and traveled north with comrades, where they met with workers and peasants clandestinely and raised the issues of workers’ control, land redistribution, and armed resistance to a return of the French colonizers. Ho Chi Minh had already ordered that they be arrested and executed — and Thâu met that fate in September 1945.

By early 1946, most of the Trotskyists had been executed or had disappeared. The Saigon Commune had been crushed, no thanks to Ho Chi Minh’s collaboration with the recolonization of the south by Stalin’s “democratic allies” in the war against the Japanese. Eventually, Vietnam was portioned, with an imperialist client government established in South Vietnam and Ho Chi Minh leading North Vietnam. The French were thrown out, but U.S. imperialism took up the fight against the “spread of communism.” The rest is (more) history.

Today, the heroic struggle of the Saigon Commune is not as well-known as it deserves to be. The treachery of Ho Chi Minh and the Vietnamese Stalinists has faded into the more generalized story of Stalinist treachery across time and across the globe. What emerges from even a cursory knowledge of the events that began on September 23, 1945 is a question that confronts the revolutionary movement at every juncture: Which side are you on?