The Sky is on Fire: Climate Catastrophe and the Urgency of Revolution

The unprecedented fires in Australia show the future that capitalism is preparing for all of us. A tiny number of capitalists are responsible for the worsening catastrophe, but only the working class has the power to save us. 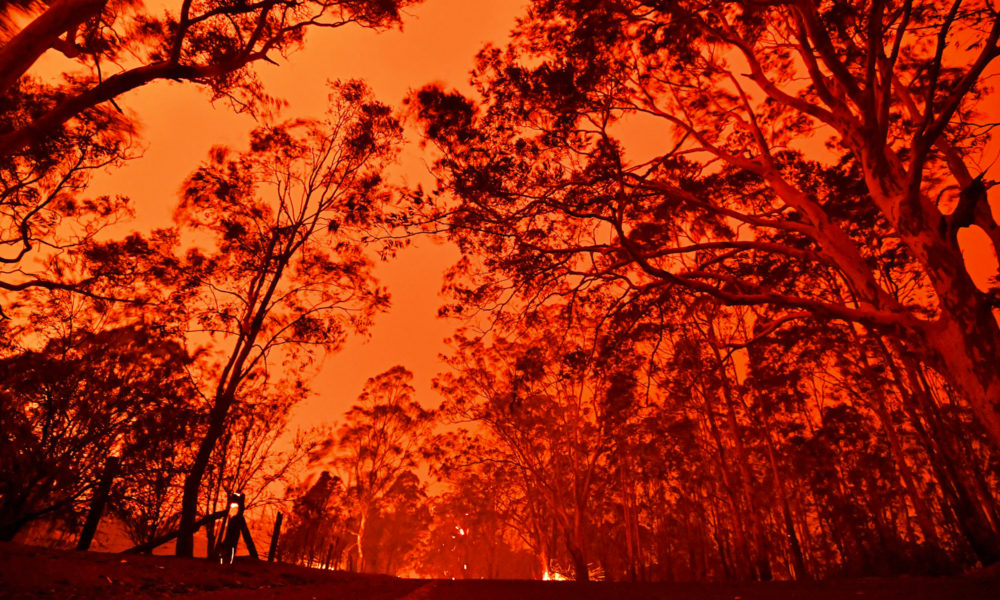 Pictures of the fires in Australia can only be described as apocalyptic: the sky is a dull orange-red as thousands of people in paper masks huddle on beaches and wade into the water, hoping the flames spare them. Australia experiences fires every summer, but the intensity of the fires this year is like nothing the human species has ever experienced. Lacking any other way to comprehend these horrors, the mind automatically turns to religious imagery.

The unprecedented fires are a direct result of climate change. They show us the future that capitalism is preparing for every person on the planet. 2019 was the hottest year on record, and 2020 will likely set records as well. This will be felt everywhere, in the form of fires, droughts, floods, and rising oceans. If CO2 emissions continue at their current rate, climate change will not only lead to ever worsening disasters, but mass suffering and even the collapse of human civilization within a few generations is possible.

What are the leaders of the capitalist states doing in the face of this existential threat? Nothing. Australia’s ruling class is particularly cynical: As their country is swallowed by flames, they are paying billions in subsidies to the fossil fuel industry and constructing new coal mines. Australia’s military has limitless resources to imprison refugees in concentration camps on Pacific Islands — but declares it cannot help their own citizens flee from the fires.

But this is not a specifically Australian problem. Some capitalist governments might talk about the need for action against climate change — but none of them are willing to take a single measure that would negatively affect their capital accumulation. Germany, for example, likes to present itself as the most ecological of the imperialist powers — but bases its economy on diesel cars and will continue using lignite coal until 2038.

When these capitalist governments gather for a climate summit, they cannot even agree on a non-binding, symbolic, completely insufficient declaration. For more than a year, millions of young people have taken part in climate strikes demanding that the world’s elites acknowledge the emergency and take appropriate measures. Why do all capitalist politicians seem so universally helpless?

Lords of the Ashes

Don’t capitalists have to breathe the same air as working people? Are they not upset when their skyscrapers are enshrouded in smoke? And more generally, how do they plan to maintain their profits and their privileges as civilization collapses? Do they want to be the lords of the ashes?

Capitalists can of course afford to breathe filtered air in chauffeured limousines and private planes. But individually, they might genuinely feel distressed. The problem is structural. The capitalist system, in which all economic decisions are made based on endless competition among capitalists (and among capitalist states), allows for no real long-term planning, much less at the global scale, as we need now.

That is why capitalists are investing in Mars colonies and New Zealand bunkers, while they continuously increase greenhouse gas emissions. These dystopian fantasies of the world’s billionaires express that the rulers of the planet are quite certain they are destroying it. It is as if the captain and crew have  blown a giant hole in the ship’s hull — and are now building a tiny lifeboat for themselves.

In the face of the apocalyptic images from Australia, we cannot succumb to climate despair. It would be ridiculous to hope that the ruling classes, gathered in Davos or the UN headquarters, will come to their senses and implement the emergency program that we so desperately need. But Australia also shows us where hope for the survival of humanity lies:

Fighting against climate change is ultimately a question of organization. Young activists need to organize the billions of workers on the planet in a mass movement that will expropriate the capitalists and place the economy under the democratic control of everyone. We could begin the transition to a carbon-free economy immediately. But to achieve this, we need to build up revolutionary organizations that can offer leadership in moments of crisis.

This is no time for false optimism. It is deceptive to talk about chances for “preventing” climate change or “averting” the catastrophe. But if we overthrow capitalism, we can mitigate the worst of the damage. A democratically planned economy at a world scale would have limitless resources to repair nature, as much as possible, and build new cities for billions of people. We could create a new society on the ruins that the capitalists are creating.

But the task of toppling capitalism has become urgent. Every delay — and every supposedly “realistic” attempt to improve the system — will mean additional disasters and more suffering. The increasing ecological crises will lead to political crises. And just like the horrors of World War I led to a wave of revolutions across the globe, the climate catastrophe can lead to new revolutions. Therein lies hope.