“The State Has Its Eyes on You”: French Refinery Workers Strike to Fight Closures and Greenwashing

Since January 4, workers at the Total oil refinery in Grandpuits, France, have been waging a militant and self-organized strike against one of the country’s largest multinational corporations. 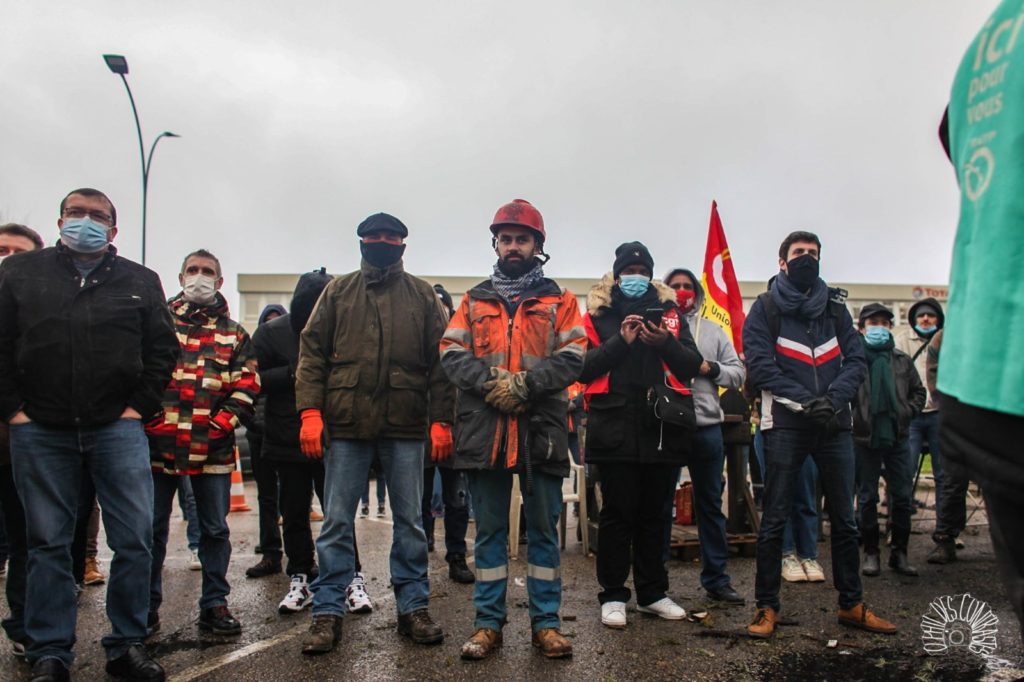 In October 2020, the French oil and gas multinational company Total announced plans to close its refinery in Grandpuits, in the Seine-et-Marne department of the country so it could be converted to a “zero-crude platform” by 2024. The plan includes the elimination of 700 jobs, with bleak prospects for whatever workers might remain on the converted site.

In response, workers at Grandpuits — particularly those in the refiner and machinist (operator) job categories — began a series of actions that have culminated in a militant strike that, as of this writing, is in its 11th day.

Origins of the Strike

On December 11, workers held an assembly to protest the plan and approved a 48-hour strike beginning the next day, along with the blocking of fuel shipments. This was, reported Révolution Permanente, “a new sequence of struggle that shows the workers’ determination to give no respite to Total” and that is only the beginning of what could be a long struggle. The refinery workers will not be taken in by a billionaire management that wants to make them pay for the closure of its site while it works hard on communicating that the decision is a ‘green’ one. It is a ‘greenwashing’ — one rebuked by the workers, who have not yet said their last word.”

In fact, Total is one of the most polluting companies on the planet. And, as Révolution Permanente has pointed out, its real goal with the closure “is to relocate production to countries in the global South, where wage and environmental standards are much lower. Total does not care about the environment. Its only interest is to increase its profits on the backs of the workers.”

Management began its efforts to shut the plant on December 17 with degassing — an essential procedure to begin overall dismantling. The machinists refused to do the work without guarantees regarding their future and a response to their demands. They barged into the site management offices and forced the refinery director to back down.

By January 4, the workers — pushed to the brink — had had enough. Machinists gathered in a General Assembly early in the morning and voted to strike. Some 90 percent walked out in what in France is called a “renewable” or “unlimited” strike, in which the workers set a specific period for their walkout but reserve the right to extend it indefinitely. They scheduled a second General Assembly for the afternoon to enlist the afternoon shift workers. And they immediately set out to broaden their efforts. As Révolution Permanente reported, “In this conflict with Total, solidarity will have to be as broad as possible — including with environmental organizations. In this framework, a strike fund is being created as fundamental to expressing support and allowing the strike against the multinational to go as far as possible.”

Their demands: zero job cuts of both subcontractors and Total employees, and the creation of new jobs — in particular, a fire department at the refinery that is exclusively dedicated to that task. Grandpuits is the only refinery in the country without one.

The Grandpuits strike has some characteristics that are rather unique for the French labor movement. It is not typical for French unions to strike over job cuts; typically, the union bureaucrats sit down in “sterile” negotiations with the bosses. On top of that, this strike is not being run by the union — it is completely self-organized.

Adrien Cornet, a firefighter at the refinery and the union delegate for the Confédération Générale du Travail (CGT, General Confederation of Labor), one of France’s major union confederations, outlined this perspective in an interview with L’Anticapitaliste on the strike’s second day.

“We are trying to build a self-organized struggle,” Cornet explained. “Delegates have been elected in each shift line. They organize the strike fund within their line, the relief workers, who are replaced, and the management of the work essential to the safety of the site. We discuss whether the work is considered indispensable and what compensation is required. That’s the kind of discussion we have around the picket line.” The workers are taking the struggle into their own hands. General Assemblies will decide on how to advance the movement.

Cornet said there had been 100 percent participation in the morning and 90 percent in the afternoon, and added, “Some other sectors — maintenance, inspection, works, major shutdown, training, security — are with us and joining us on the picket lines. … We’re having a good discussion, so it’s possible to broaden the strike.” And he spelled out efforts to link up with other workers beyond Grandpuits — and expressed a particularly militant economic perspective:

We are working on links with the energy sector. We are quite close to the employees of the Nogent-sur-Seine nuclear power station; we fought side-by-side with them in previous national movements, like the one for pensions. We have fundamental things to discuss about energy at the national level. We workers should have our say because we are the ones who run the power plants, the refineries, and the oil depots. We are the ones who ensure the security of these sites. In reality there should be nationalization under workers’ control by expropriating large conglomerates such as Total.

At this writing, the strike is in its second week. On its one-week anniversary, January 11, it was renewed unanimously, showing a determination to fight and a refusal to be intimidated by the filthy-rich multinational. Cornet told the assembly the self-organization was growing stronger and insisted that workers continue to take full control of their strike, even if it means “overwhelming the trade union organizations.” And as a striker who has worked at Grandpuits told Révolution Permanente, “They are surely planning all their moves 25 years in advance up there, like a chess game in which we are their pawns. But they didn’t plan that we wouldn’t obey the degassing orders, and they’re going to be surprised to see how far we’re willing to go. They have the money, but we have the numbers, and with those numbers we’re going to bend them.”

On January 13, the Grandpuits strikers made a show of force beyond the refinery itself, and held a rally in Melun, about 30 miles away. They were joined by elected officials, students and teachers, and other workers who came to support them, including railway workers, machinists, and postal workers. Adrien Cornet spoke to the crowd about solidarity: “We have the same problems, the same needs, and we have realized how much we are alike. The railway workers have the same shitty life as us … And like us, they suffer a lot of attacks.”

Anasse Kazib, a railroad worker, militant from SUD Rail, and leader of earlier strike battles, spoke as well. “You should be proud of who you are, of what you have done and of the battle you are waging, because this battle is being fought for the whole of our class. Never doubt victory. There is a phrase from Rosa Luxembourg, who said: ‘The revolution seems impossible before it happens and when it happens it seems inevitable.’ Victory sometimes seems impossible against a giant like Total, but know that you are not alone.”

At this writing, the strike continues. It is a fight for jobs, pointing the way forward as the bosses aim to sacrifice more and more workers on the altar of the twin health and economic crisis, determined to make the working class pay while the capitalists seek to maintain their profits. Layoffs and attacks on working conditions have already been unleashed in other French sectors, especially aeronautics and the auto industry. The Grandpuits struggle is an example of workers going on the offensive.

It is also a fight for ecology. The Grandpuits denounce Total’s greenwashing, but at the same time are well aware of the critical importance of transitioning away from oil. Raising nationalization of the energy sector, as Adrien Cornet did, is a recognition that “saving” the environment cannot be left in the hands of the giant multinationals, which use it as a pretext for attacks against workers.

As Adrien Cornet told the workers gathered at the January 11 General Assembly, where they voted to extend their strike until at least February 9, the strike’s impact goes well beyond the refinery.

“You are the bastion,” he said. “You have raised your head. You have become aware of your collective strength. And the state has its eyes on you. It is afraid of what is happening at Grandpuits.”