The Struggle for Abortion Rights in Ireland

Women in Ireland still do not have the right to an abortion and the Catholic church continues to hold a central role in political life. What is the struggle for abortion rights like in Ireland and how does reformism weaken the struggle? 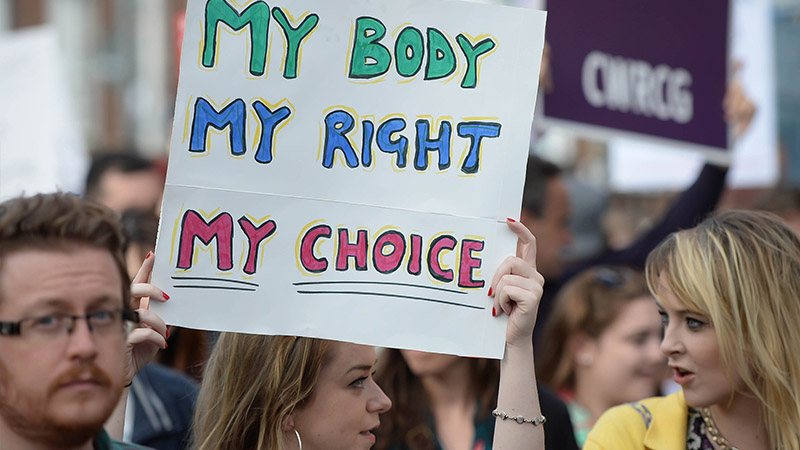 On 25th November thousands of activists demonstrated in Dublin calling for the abolition of the 8th amendment to the Irish constitution – a section that asserts equal rights to life between the mother and fetus (the wording refers to the “unborn” which assumes that that life begins at conception). The demonstration was in part was a celebration of the decision by ICTU, the Irish trade union congress, to support the call to repeal the 8th. In tribute to recent mobilisations by Polish women, many wore black – the main symbol for the Polish demonstrations.

Yet the two campaigns are very different, and the comparison shows up many weaknesses in the Irish movement. They are similar in that both involve the mobilisation of tens of thousands of women, fed up with church and state ruling over their bodies. However in Poland we had a spontaneous movement that took strike action and went onto the streets in an instant and successful counter to an attack by the right, designed to extend the law to prevent abortion under any circumstances.The Irish movement is based around a call for a referendum to remove a decades old element of the constitution and is heavily dominated by the trade union bureaucracy and the populist and reformist politics they espouse.

The colour and militancy of the demonstrations tends to disguise the fact that the repeal campaign, as with antiausterity campaigns and protests against water charges led by the union bosses, is at its heart a lobbying campaign aimed at persuading the Irish bourgeoisie to change direction. This limits both policy and tactics.

Of course the idea that the constitution poses such a direct threat to women is repulsive and should always be opposed, but it is the ebb and flow of popular consciousness and of class struggle that secure rights. No-one remarks the many elements of the Irish constitution meant to secure the well-being of the citizens that are simply dead letters or how easily a history of neutrality was abandoned to facilitate war transport through Irish airports by the US military. Removal of the 8th, on its own, would simply restore the status quo of an Ireland before the amendment, where abortion was practically impossible. A new referendum might well be lost through a mobilisation of the large forces of the religious right. As recently as 2002 an attempt to overturn suicide as grounds for an abortion was only narrowly defeated in a referendum. If a new referendum on the 8th amendment is defeated what are women to do then? Accept their fate?

There are other problems. The call for the right to choose is drowned out in a popular front that holds together a range of views that stop far short of support for any extensive abortion rights. In addition, the movement has a partitionistelement. The right wing attacks on women do not stop at the border with the British zone in the North. British legislation was never extended to cover the colony andrecently women in the North have been charged with buying abortifacientson the Internet and one woman was given a suspended sentence – underlining the fact that criminalisation of women still applies.

The weakness of the campaign extends to tactics. The current activity is to lobby a “people’s assembly” set up by the government to consider the issue of a constitutional change. While it is right to present your case wherever possible, the campaign should point out that the assembly is a hoary mechanism used over and over by the government, and supported by the trade union leaders, to delay decisions and create a fake sense of popular consent to their eventual action. All shades of political position are present (with the working class massively under represented) and the range of views justifies the government clinging to reaction.

Battle on the streets

The 8th amendment was the result of an offensive by the religious right, led by the Catholic church. Abortion rights were non-existent, but the right wanted to copper-fasten the ban and prevent any future liberalisation.

The battle has never returned to the constitutional field. Rather the application of the 8th amendment has led to the brutal victimisation of individual women leading to mass protest, followed by whatever interpretation of the constitution Irish capital considered necessary to defuse the mobilization.

The most striking of these incidents was the X case. A 14 year old girl in care was barred from travelling to Britain for an abortion. Following mass protest the courts, to the dismay of the right, interpreted the “equal right” section to mean that there was a limited right to abortion where the life of the mother was at risk.
Since then this right has remained ill-defined. The cycle of medical barbarity has been followed by cycles of protest.

One of the most significant of these cases was the case of Savita Halappanavar, a foreign national allowed to die of sepsis despite her pleas for help, because of her pregnancy. Outrage at home was mirrored abroad, as it was realised that visiting Ireland while pregnant might result in a death sentence.

The response to the case was a prolonged lobbying campaign by feminists, socialists and trade unionists which took as its focus the slogan “legislate for X.” Under international inspection the government did finally legislate.

The result was not good. The Protection of Life During Pregnancy Act of 2013, passed in the wake of the Death of Savita Halappanavar – maintains an almost total ban on abortion. The only area of liberalisation has been in the right to travel outside the state for an abortion. The act went no further than formalising the court rulings made around the X Case of 1992. Termination was allowed where the mother’s life was at risk. Suicide was a potential reason, but required interrogation by a panel of doctors. The package was wrapped up with criminal law involving 14 year sentences for women who stepped outside the legislation.

As with the constitutional amendment, the law had to meet the test of practice. Such a test was not long in coming, In the Y case a young women, the victim of rape, applied for an abortion because of suicidal intent. She was interrogated by a panel of doctors who agreed that she was suicidal. However because of delays they agreed that the best form of ‘termination’ was that she gave birth! The woman went on hunger strike and the state obtained a court order to forcibly hydrate her, subsequently carrying out a caesarean section without her consent and delivering a baby.

The repeal the 8th campaign is in many ways a carbon copy of legislate for X. Many in the leadership would consider that campaign a success. In their view a gradual inching forward, even through reactionary legislation, will gradually extend women’s rights. So deeply is this model embedded that a legalistic lobbying campaign in the Northern state under the slogan “trust women” simply ignores the absolute veto that the right wing Democratic Unionist Party has on this issue.

This worldview consistently ignores a central element of the Irish state – its confessional character and the alliance of Church and State. As the campaign waits patiently for a response to its lobbying the government has buried the issue in a people’s assembly and rushed to Rome to invite the Pope to visit. Any abortion referendum will coincide with a papal visit and a mass conference on the family organized by the Irish bishops.

The endorsement of the trade union bureaucracy is to be welcomed and can provide substantial funding and resources, but we must also see that it can lock campaigns in legalistic and reformist cages. It is not the conservatism of the bureaucracy that is the main problem, but the willingness of many socialist and feminist activists to operate a policy of peaceful co-existence with them and avoid calls for a more democratic structure or advance their programme as the policy of the movement.

In Ireland today popular support for the Catholic church has fallen sharply, yet it remains embedded in the state structures, especially the health and education sectors. Up into modern times the church were involved in barbaric medical practices aimed at pregnant women, usedthe slave labour of young women in the Magdalen laundries and of children in orphanages, were involved in child rape and violent abuse and ran baby markets exporting to catholic families across the world. They have earned the hatred of many workers, yet the relation with the state is so close that compensation for their crimes was paid for by the government.Activists should demand the separation of church and state as a necessity to remove the shackles from women and from the working class as a whole. They should recognize the class nature of abortion restrictions – those with the money simply travel to Britain and pay for the procedure – and aim the campaign at the working class. In terms of tactics they should learn from the 1960s battle for contraception rights, when women flouted the law with contraception trains and mass protest that made an ass of the law.

Already activists have come forward in the North to “confess” to the police the use of abortifacients. Defiance on a mass scale – the sort of defiance shown by Polish women – can defeat the bigots.