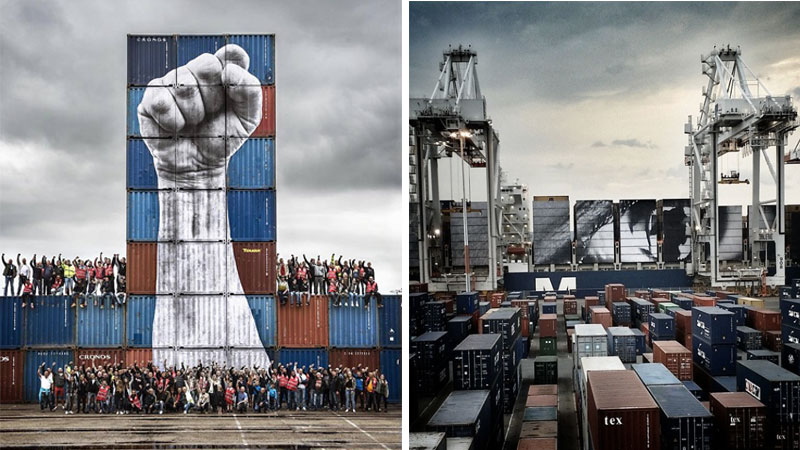 Dockworkers usually do not like too many photos. This is because some in the bourgeois press entertain themselves by distorting the intentions of these workers. Nevertheless, here they are with their arms held high in the sky, in front of containers covered with a collage of an immense raised fist. This is to show the world their determination and strength and to send a fraternal greeting to all those around the world who are currently in struggle.
This collage is without a doubt the work of the artist known as JR, who particularly likes to work in the company of dockworkers. In June 2014 he created huge frescoes and photographs on containers while in the company of “les dockers.” He then had his work loaded onto a cargo ship for the Land of Waters festival.
JR’s artistic team has now returned in the middle of a period of mobilization–some of the photos have been leaked. Accompanied this time by the incredible director Agnès Varda, JR indeed seems prepared for a new artistic documentary that will cut across all of France.
And in this period of intense struggle against the labor reform in France, what better way to do that than to be accompanied by the mobilized workers–the dockworkers who are situated in the very capital of the strike! The installation was recently dismantled and transported so that it could be viewed by the public from the Francis I Lock, allowing people who are not authorized to enter the port area to appreciate the enormous work of art from outside.
This artistic team has left a big impression, demonstrating once again that art and struggle are a marvelous combination.