The Taylor Law Can be Defeated

Passing resolutions and lobbying Albany is not enough. If we want to take back the right to strike, we will have to use it. 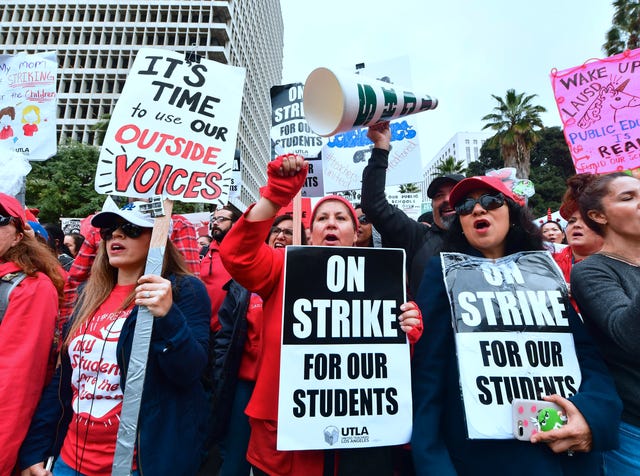 On Monday, September 23rd, the Bronx Community College Chapter of the Professional Staff Congress, CUNY union held a forum to discuss the Taylor Law as part of a series of forums preparing for a strike authorization resolution vote early next month. A similar resolution recently passed at the Graduate Center Chapter of the PSC. $7K or Strike activist and Left Voice Editorial Board member, James Hoff, was invited to speak on the subject and how it relates to the current contract struggle. Below is a slightly edited version of the transcript of his talk.

Thank you for having me and thank you to the BCC Chapter for putting this excellent forum together today. My name is James Hoff and I am an Assistant Professor of English at the Borough of Manhattan Community College, a member of the BMCC Chapter Executive Committee, and a Delegate to the PSC Delegate Assembly. I am also a member of $7K or strike, a rank and file movement to end the economic exploitation of adjunct faculty here at CUNY.

I am here today to talk about the Taylor Law, but before I jump into the details of the law and what it means for us at this moment in our contract struggle, I’d like to talk a little bit about the way that people talk about the Taylor Law, because there are usually two reasons why people bring up the Taylor Law in the PSC. Some PSC members, especially PSC leadership, like to bring up the Taylor Law to remind the rank and file that it is illegal to strike. The Taylor Law is frequently employed to scare or silence those who express interest in building a strike or to make excuses for why particular tactics, such as work to rule, teach outs, or day strikes have not or cannot be employed. This is sometimes paired with a superficial analysis of the 2005 TWU strike as an example of what happens when you break the law. But there are also those, like myself and other rank and file activists, who frequently invoke the Taylor Law for very different reasons. We are interested in talking about it precisely because it is one of the primary obstacles between us and a real fighting, class-struggle union. And that is what I want to talk about today: how to fight the Taylor Law in order to build a fighting union by taking back our right to strike.

First of all, it should be clear to us that any union that willingly gives up its right to withhold its labor is not worth the paper its constitution is written on; and unfortunately, the PSC has done exactly that. Indeed, not once in its history, has the PSC gone on strike or led anything resembling a work action that might even come close to violating the Taylor Law. The strike authorization vote that we held last contract was as close as we have ever come to such an action, and that opportunity was effectively thrown away by the leadership who settled almost immediately following the successful vote.

And what has happened to CUNY and our union because of this inaction?

The real value of FT faculty wages has fallen almost 25%; exploited, low paid adjuncts have become a majority of the faculty, teaching almost half of the classes; per student funding to CUNY has fallen dramatically; and tuition has skyrocketed. Of course, there are a lot of reasons why this happened, and of course this also happened even in states such as California, where the right to strike is not prohibited by law. But there is nonetheless a clear and obvious connection between the Taylor Law and other laws like it that prohibit public union strikes, and the slow motion destruction of the public sector that we’ve seen at universities like CUNY.

Clearly, the Taylor Law has to be challenged, but the New Caucus approach to that task has been timid to say the least. The union has lobbied and campaigned for politicians, but so far very few of those politicians have committed to doing anything about the no strike clause of the Taylor Law. We also passed a resolution at the Delegate Assembly, which I voted in favor of, that unfortunately included no actual plans for action beyond bringing said resolution to the statewide New York State United Teachers conference for a vote. No surprise, the resolution failed at NYSUT and has not been mentioned since. This is, of course inadequate. The only way to get rid of the Taylor Law is to directly challenge it and in doing so make it ineffectual.

But how do we do that?

First we should start with the Taylor Law itself and think a little bit about what we are up against and how strong the law actually is. Marc [Marc Kagan, the other invited speaker] will talk in more detail about the specific penalties for striking, so I won’t go over those too much here, but I will say that indeed they are a challenge, and they can be scary and we should take them seriously. No one wants the union to be fined; no one wants to lose dues check-off, although frankly I have my doubts about whether or not that would actually be as catastrophic an event as some claim; and obviously no one wants to lose an additional day’s wages for every day on strike. But there simply is no reason to believe that such penalties are worse than the wholesale giving up of our greatest weapon: the right to withhold our labor. And of course they also have to be weighed against the possible gains we would win through a successful strike, not only in terms of pay and benefits, but in the long term power of the union to affect change within the university and the city.

Secondly, even those who like to use the 2005 TWU strike as an object lesson for militant unionism gone awry, have to admit that we are now operating within a radically-altered political landscape. When the TWU went on strike there hadn’t been a major labor action for six years, and there had not been a successful public union labor struggle for much longer. Since then, Chicago Public School Teachers led an incredibly high-profile and successful strike in 2012, and of course, since 2018, we have seen a wave of education workers’ strikes across the country that—as Chicago Teachers prepare to strike yet again—are showing no signs of letting up. Meanwhile one of the biggest private sector strikes in years at GM is entering its second week, and the workers have seen an outpouring of support from the public and several politicians.  Furthermore, as many of you probably already know, many of the 2018 teachers strikes took place in right-to-work states, and many were illegal. For instance all three of the first strikes in 2018 took place in states that explicitly prohibited public sector union strikes: West Virginia, Oklahoma, and Arizona.

In West Virginia, striking teachers managed to avoid any penalties at all thanks to the solidarity and support of superintendents, who closed the schools in advance of a strike, technically reducing the strike to a work action. Although politicians still insisted the strike was illegal and ordered teachers back to work, they refused and because the strikes were incredibly popular, there was little that politicians could do. In Oklahoma, penalties for striking involved the loss of wages while on strike, but again in many districts superintendents closed schools, and in those where they did not, teachers used their sick days to maintain getting paid. Lastly in Arizona, maybe the most successful of the three strikes, teachers faced termination for missing work, but again framed their strike as a walkout, and because they had so much support and were largely irreplaceable, were able to defy the law. Now of course the laws they faced are different, and in many ways weaker than the Taylor Law, but the lesson here is clear:  not only were they able to defy these laws, they were able to do so without incurring any penalties at all! Even had they been forced to lose wages during the strike, the gains they won would still far outweigh the loss of those wages.

This was possible because they had worked tirelessly not only to build solidarity within their own ranks, but to build massive public support for the strikes, which made it difficult for politicians to punish them. At a time when, thanks in part to the teachers strikes of 2018, unions are more popular than ever, such public support would not be any more difficult to build here at CUNY.

Lastly, and I think this is the most important thing we have to consider as a union: when we talk about directly challenging the Taylor Law, we are not talking only about a full-blown indefinite strike, and no one is putting forward the idea that we can just go on strike tomorrow. We can however, build up to such a strike by challenging the legitimacy of the law with a series of smaller escalating work actions. For example, working to rule, though technically illegal under the Taylor Law would be impossible to prosecute, especially at a work place like CUNY, where there is no formal way of measuring workload for many members and where faculty and staff perform an extraordinary number of tasks that are not technically required by the contract. Furthermore, at an institution dedicated to teaching, holding teach outs, that bring students out of the classroom and into the streets, would be difficult to categorize as a work action. Lastly even a series of rolling day strikes would be extremely difficult to prosecute, since many PSC members have complicated teaching and work schedules and it would be a logistical nightmare to figure out and prove on an individual basis who was and wasn’t in their classrooms on any one given day and thus difficult to impose any loss of wages, much less two days’ worth.

So as you can see the Taylor Law is no laughing matter, but it can be challenged and it can be defeated. But we will not manage this by simply lobbying and campaigning for Democrats. The climate is right for a militant rank and file-led strike at CUNY. If we can connect our working conditions and our demands to the bigger demands of the whole class we can strike and win, and in the process defeat the Taylor Law.