The following is an interview with Mexican drag king, Nancy Cazares, also known as Gabriel. Nancy is also a Trotskyist militant of the Movimiento de Trabajadores Socialistas (MTS). 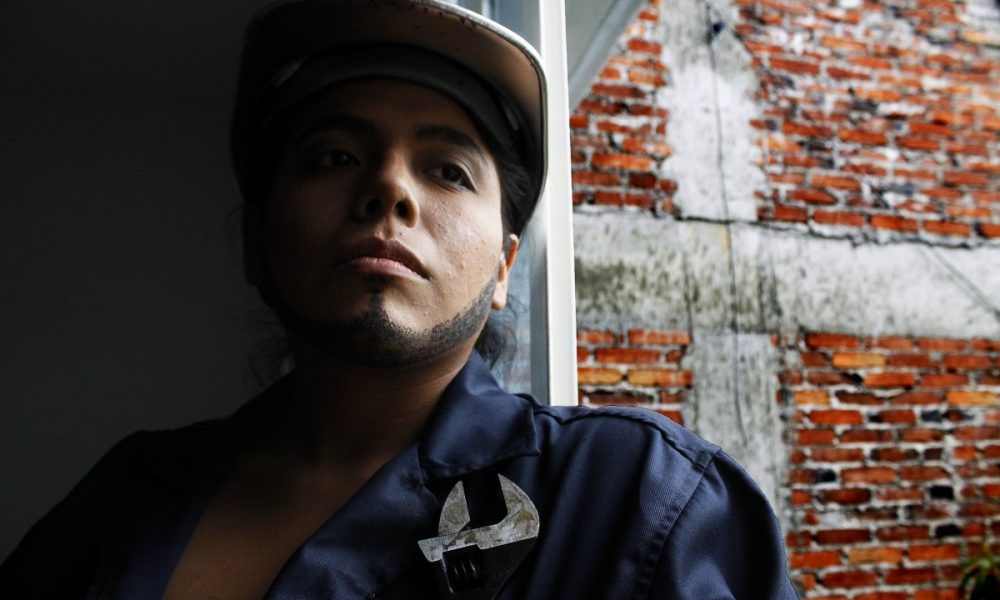 How did you become a drag king?

In September of 2016 I began to go to events organised by the ballroom community in Mexico. I started to practice vogue and in October, I became part of a community of dancers and artists called House of Drag. I created a character based on an androgynous style that always appealed to me. Something that had been a source of discrimination in the past became useful to me. I have learned to appreciate it.

“Gabriel,” my character, first appeared dressed as a gypsy. A couple of weeks later I got the opportunity to dress as St. Juan Diego, the indigenous man who allegedly saw the Virgin of Guadalupe, in an event celebrating December 12th (the Day of the Virgin of Guadalupe, one of the most important catholic festivals in Mexico). Looking at other drag kings across the world, I realized that there are as many styles as there are personalities, all of them constantly changing. I want to keep experimenting.

Usually when people think of drag, they think of drag queens, not drag kings. What is the drag scene in Mexico City and how does it feel to be a drag king?

In Mexico City, the drag scene has grown in the last few years. Shows like the Mexico City “Drag Race” or “I Want to be Your Drag Coach” brought visibility to many local drag queens. It has peaked interest for many people who have begun participating, exploring, and offering shows.

Within that boom, however, the drag kings have not been properly represented. It is difficult to find women in the drag scene, be it as faux queens or as drag kings (there are also trans men that are drag kings and faux kings). It is easy to find American or European drag king websites, groups, and facebook pages that show presentations and shows. In Mexico, there are only a handful visible on the scene. Recently a faux queen won one of the big contests, and I really hope that opens it up for other women so they will begin joining these kinds of events.

What is the relationship between being a revolutionary militant and a drag king?

When we practice, we have to do it in parks or someone’s house because there are no affordable spaces. We don’t have spaeces for our events either. We have to go through tedious bureaucratic procedures that rarely end well.

I realise that we have to change this world when I realize that I’m afraid to go out in the street—not only because I am a woman in the Mexico of femicides, but because I live in the Mexico of hate crimes, of “corrective” rapes against lesbians, of impunity of transfemicides, and of the National Front for Family (an ultra-right organization that advocates anti-LGBT laws). All these things make me more and more convinced every day that we need to change everything.

I also see how other parties like MORENA appear. For many in the country MORENA represents an alternative to the current regime’s parties. But then I read that MORENA promises to put issues such as marriage equality and abortion to a popular vote, as if basic rights should be voted on.

It is urgent to change the world and we need a working class organization that really fights in our interests. We must change it independently and with the aim of getting to the root of the problem. We must include the many thousands of workers that are not currently represented by the parties in power.

What does it mean for you to play with gender roles in a country like Mexico that has so many femicides?

Firstly, to dare to play with an aspect of my appearance that has been used to oppress me is liberating. It empowers me to spend time inside the ballrooms where people are encouraged to be daring and original. As a woman, I don’t feel that doing drag will change my position nor in that of my comrades, but it does give us a voice. In a world where being poor already puts you at a disadvantage, being poor and being a woman or gay or a trans requires a mixture of a rebellious attitude and courage.

I don’t think the problem is finding a form of expression that takes a political stance or questions gender in general; the problem is making that the goal as opposed to the process. What I mean is, for me it is very clear that the visibility you have as an artist can be used to promote any idea or viewpoint, but its impact lies not in how you feel or how people see you in that moment, but in the greater purpose it serves.

I have always been surprised by those who place issues such as creating “neutral” language at the center of the debate. One needs to simply go to bars to come face to face with the real issues that hurt us: poverty, financial instability, and discrimination encouraged by the capitalist ideological apparatus; accessing quality health care or education—those are the problems. It is important to reflect our most intimate needs, but we must aim to rebuild society in a collective way along our class, just like André Breton and Trotsky said in their Manifesto for Independent Art.

In the United States we see more and more how “pink money” makes sexualities and the diversity of genders “acceptable”—that is, as long as you have money. What are your thoughts about the corporatization of the LGBT community and the drag scene? As a revolutionary, how would you address this issue?

In Mexico the commodification of the “gay” life stereotype provides mass profits for companies. They appear in the Gay Pride Parade giving free samples of their products. It is empty support, with no purpose other than to attract a clientele that increases their profits. This commodification of gayness has come hand in hand with a greater awareness of the LGBT community among politicians and institutions, who in turn transform historical slogans into true political plunders.

Now, Mexico City’s Head of Government (Miguel Ángel Mancera) has made use of the age-old practice of offering concessions in election times to struggling constituencies. He has declared June “Diversity Month” but made no true changes to our day-to-day lives. There is a transphobic bus paid for by the church that freely travels the streets of Mexico with its hate speech. The bus says ¨girls have a vulva and boys have a penis¨, an explicitly anti trans message paid for by the Catholic church in Mexico, Spain, Chile and more. Nothing is done to address the latest hate crimes.

Mancera, the mayor of Mexico City seems to be pushing for change. But through forums, workshops, and fast-track expedition of legal documents to trans people, he has sought to silence the demands of a sector of the LGBT community that this year took to the streets to fight against transfemicides (which went skyrocketing early this year) and question the role of institutions and TERFism. Trans people still hold the worst jobs, and experience huge amounts of violence, which cannot be resolved with a few crumbs from the government.

As a militant in a socialist and revolutionary organization, I believe it is necessary to organize ourselves and to take to the streets to fight. We cannot only take the streets at the Gay Pride Parade, funded by the capitalists, and their companies and institutions that oppress their employees. We must take back political spaces to defend our labour, sexual, and reproductive rights. We must not only fight for our rights within this system, but also fight to overthrow it.