The U.S. and North Korea: A War of Nerves, For Now.

While Hurricane Harvey devastated Houston, another storm was brewing thousands of miles away. 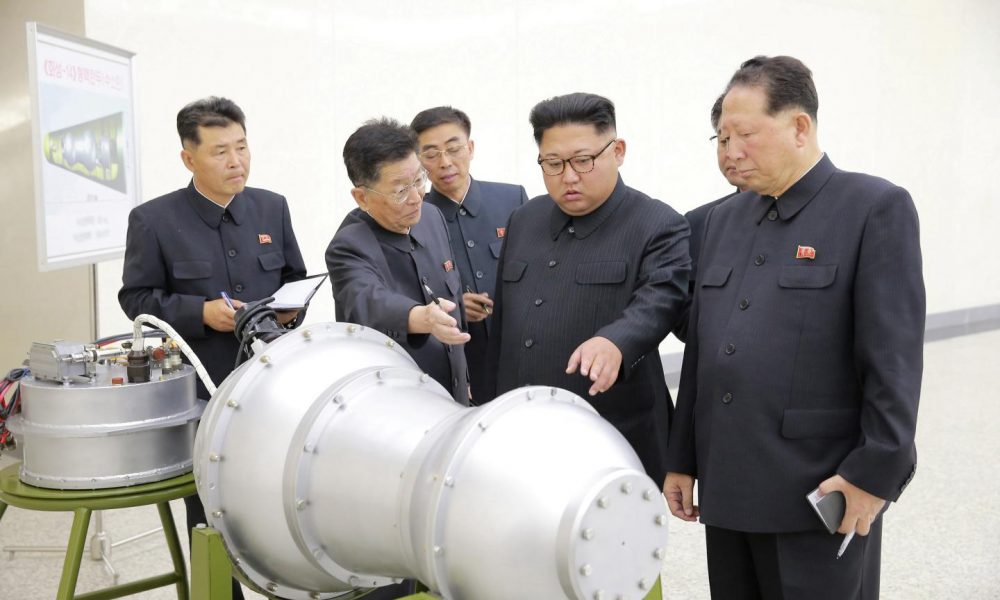 Tensions have reached a boiling point as a result of North Korea’s launch of a medium-range missile over Japan and the country’s test of a hydrogen bomb less than a week later. Trump’s inflammatory rhetoric, promising to bring “fire and fury like the world has never seen,” contrasts with the few realistic options that Washington has to contain Kim Jong Un’s regime.

But the conflict and the risks that go along with it have implications that reach further than the Korean Peninsula. It’s clear that Trump’s escalation in rhetoric is an indirect shot at China. This was made even more clear by Trump’s tweet threatening to cut off all trade relations with countries who trade with North Korea — an obvious jab at China.

Since Trump’s inauguration, tensions between North Korea and the U.S. have steadily grown, reaching a zenith this past week. Although Nikki Haley has characterized North Korea’s behavior as “begging for war,” neither side is willing to take that step.

On August 9, Kim Jong Un threatened to launch an attack against Guam , the U.S. territory closest to North Korea. While it did not actually attack the territory, it did make a show of force dangerously close to an important U.S. ally. On August 29, North Korea launched a medium-range ballistic missile, but instead of firing south in the direction of Guam, it fired north, flying over the Japanese island of Hokkaido and landing in the Pacific Ocean. (Only a few days earlier, Hokkaido had been the site of military exercises by American and Japanese forces.)

This is not the first time that missiles launched from North Korea reached Japanese territory. The same thing occurred in 1998 and 2009, but in both of those instances, the Japanese government had been forewarned.
This newest missile launch signals a clear escalation of the threat of violent military confrontation. It is currently North Korea’s longest-reach missile and is considered to be just a step below the acquisition of intercontinental ballistic missiles that could reach U.S. territory.

Kim Jong Un’s move was meant to show off North Korea’s new military capacity and send a message to its enemies and reluctant allies (like China) without crossing a “red line” that would signify a point of no return.
Kim Jong Un went further in showing off his military capacities on Sunday with the sixth and most powerful nuclear test — this one from a hydrogen bomb, the reverberations of which were felt as far away as towns in China. The bomb was between 4 and 16 times more powerful than any bomb ever set off by North Korea.

The responses to Kim Jong Un’s challenge highlight the divisions within the White House that arise from unsolvable dilemmas for the U.S. The U.S. is unwilling to allow North Korea into the privileged club of countries for which the possession of nuclear weapons is considered acceptable but neither is it willing to risk a war to prevent their attainment of these weapons. While Trump threatens “fire and fury” on Twitter, Secretary of Defense Jim Mattis assures the world that the administration has never abandoned diplomatic options. Rex Tillerson echoed this message.

Since the most recent hydrogen bomb test, new divisions have been revealed and others seem to be soothed over, for now. In this case, the Trump administration — including general Mattis — are in agreement that the threat of the use of a hydrogen bomb against the US “will be met with a massive military response.’’.

However, this does not represent a new era of agreement within the Trump administrations. Rather, the divisions show themselves after Trump tweeted that “the United States is considering, in addition to other options, stopping all trade with any country doing business with North Korea” (in other words, China). This is a laughably empty threat as stopping trade with China would mean the collapse of the US economy, and as a consequence, the global economy. Once again, representatives of the Trump administration had to quickly distance themselves from Trump’s tweets. On Sunday, Treasury Secretary Steve Mnuchin used an appearance on Fox News to do damage control. “We are going to work with our allies. We’ll work with China.”

Trump’s foreign policy vacillates between threats of preemptive military strikes and dialogue designed to pressure China to check its fractious ally.
Beyond its incendiary language, the U.S. has, until now, responded with more of the usual, deepening U.N. Security Council sanctions against the North Korean regime, while engaging in joint military exercises with South Korea. Thousands of soldiers participated in this latest show of strength. This annual ritual is no doubt an obscene demonstration of military power and a reminder that “all options are on the table.” Although for now, no one wants to use them.

The U.S. and its allies want to avoid a military conflict that would have huge costs even as a conventional war and incalculable costs if it were nuclear. This does not mean that the militarization of the Korean Peninsula has not reach the point in which a conflict could be opened, even accidentally.

It has been a quite while since Japan decided to leave behind its official policy of pacifism after the country’s defeat in the Second World War. The prime minister of Japan, Shinzo Abe, is using the state of panic to advance his agenda of strengthening the military and the defensive capacity of his country.

Moon Jae-in, the liberal President of South Korea won the elections in May promising to put forward a policy of negotiation with its northern neighbor. Furthermore, a focus of the campaign was opposition to the installation of the THAAD missile system by the U.S. The stated goal of THAAD is to intercept missiles launched by North Korea; but the U.S. makes little attempt to hide that the program’s real aim is threatening China, a country well within the range of these missiles.

However, Moon abandoned the thrust of these promises that would create confront U.S. interests. Once again, he took the “realistic” path of subordinating himself to his most powerful ally, the United States.

China, meanwhile, is engaging in a difficult balancing act. The country’s policy is de-escalation, in other words, hoping that all parties somehow magically retreat. The worst situation for China would be that Kim Jong Un gives an excuse to North Korea’s enemies to increase their military presence in the region. But the North Korean leader has demonstrated himself to be an uncomfortable ally and willing to bite the hand that feeds him. There is nothing that Beijing can to do further discipline North Korea without risking a major crisis along its own border. And of course, China has a special interest in preserving North Korea, which continues to act as an obstacle to the aggressive policies of the US and its allies.

This complex web of interests creates an unstable geopolitical and military situation.

And what about North Korea? Without a doubt, Kim Jong Un is at the head of a detestable dictatorial regime. But to consider him a crazy and capricious dictator, or a provocateur, as much of the corporate media does, is an exercise in intellectual laziness. This does not justify Kim Jong Un’s actions and does not mean that wrong decisions may be taken, which would have a very high cost.
Kim Jong Un’s apparent irrationality emerges from trying to survive without being eaten alive by his neighbors — South Korea or China, nor swept off the map by the United States, as has happened to other regimes like those of Saddam Hussein or Kadafi.

Kim Jong Un may be mad, but there is a method to his madness. Like any Bonapartist, his power comes from being an arbiter between different factions of the military and the party bureaucracy, using a system of purges and rewards. According to some information, it is calculated that Kim Jong Un has executed 140 people in the military, among them, his own uncle. Accounts also claim that he ordered the murder of his half-brother who maintained good relations with China, Kim Jong Am.

The combination of development of nuclear arsenal plus economic reforms announced by Kim Jong Un at the Workers’ Party Congress last year (the first congress in 30 years) has allowed him to develop a base in the new middle class made up of government officials.

The nuclear program plays an essential part in the North Korean agenda, required by the country to survive. This transforms the nuclear program in a practically non-negotiable aspect for North Korea. Its dissolution was only apparently on the table during a brief window between 1994 and 2000. This coincides with the Clinton administration’s politics of dialogue, as well as the worst famine in recent North Korean history.

As Bruce Cummings argues in a recent article, U.S. policy has historically been one of agression toward North Korea: non-recognition in 1948, economic sanctions beginning in 1950, and the Korean War from 1951-1952 which is technically still going on today, and was only placed on hold by an armistice in 1957.

Imperialist aggression, which by targeting North Korea also takes indirect aim at China, is not abstract. As a brief overview, the U.S. has 40,000 soldiers in Japan on 112 bases, primarily on the Island of Okinawa. This is addition to the headquarters of the Seventh Fleet in Yokosuka, Japan, which includes aircraft carriers, submarines and missiles. There are 35,000 U.S. soldiers in South Korea, along with tanks and the THAAD missile system. Guam is essentially a military base and nearby is the Pacific command in Hawaii and a significant U.S. military presence in Phillipines, Singapore and Thailand.

The pivot towards the Asian Pacific region began under the Obama administration. The difference is that, with Trump in the White House, this militarism has increased, as a strategy to mitigate the decline of U.S. hegemony. The U.S. and North Korea are now toeing the line with a war that it seems that no one really wants.