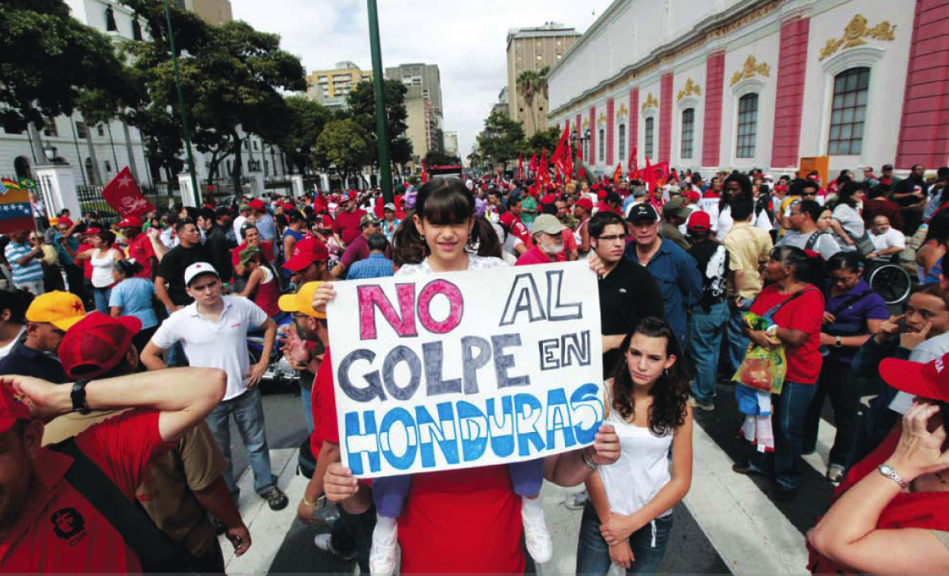 “Stop the Coup in Honduras”. Image From 21

From interfering in the independence movements against the Spanish crown to establishing the notorious United Fruit Company in Central America, the U.S. government has sought to keep Latin American workers powerless.

The construction of the Panama Canal, for example, connected the Atlantic and Pacific Oceans in the early 20th century, greatly expanding the American military presence in the region. That geopolitical move allowed the United States to more easily dominate the area, support allied dictatorships and defend what is saw as its “backyard.”

The capitalist structures of Latin American nations are linked and entirely dependent on imperialism itself. Nevertheless, inspired by the Bolivian revolution in 1952, the Cuban revolution of 1959 and the period of international class struggle which began in 1968, Latin America saw a whole wave of combative and/or revolutionary uprisings that challenged U.S. domination and capitalist society.

In South America this movement took place from 1964 to 1976 in Brazil, Chile, Uruguay, Argentina and Bolivia. But U.S. imperialism and the native bourgeoisie smashed these uprisings with military dictatorships, murdering activists, labor organizers, students, socialists and everyone who fought for radical change.

From 1963 to 1980, Honduras was under various dictatorships. As in the beginning of the century, Honduras was the main center of military operations of the imperialist United States.

The United States used the military base it had in Palmerola against the Cuban revolution in 1961. There, the government also trained the right-wing “Contras,” paramilitary forces used against the Sandinista Revolution in Nicaragua in the 80s.

In 1965, the United States sent troops to the Dominican Republic to repress the mass movement that was defending the elected president, Juan Bosch. In 1980, the United States sent more troops to support the government of El Salvador against the guerrilla forces of the Farabundo Martí Front for National Liberation (Frente Farabundo Martí para la Liberación Nacional, or FMLN)—a conflict that resulted in the deaths of more than 35,000 people.

The new “democratic governments” of the 1980s were settled after the dictatorships accomplished their task of destroying every radical movement and the possibilities to rise with more strength against the neoliberal offensive deployed with Washington Consensus under the presidency of Ronald Reagan. Throughout the whole continent, antiworker governments applied austerity measures, privatizations and attacks on working conditions. The rise of outsourcing and the use of undocumented and uncontracted labor led to the creation of a “second working class.”

These governments increased the foreign debt and IMF interventions, leading to high levels of poverty and the proliferation of slums. Latin America and the Caribbean were shattered by these policies.

Wounded by dictatorships and other U.S. interventions, Latin America was a breeding ground for the development of cartels and gangs (“maras”) during these decades. The drug trade has deeply affected much of Latin America, with narcotics being smuggled from Colombia through Central America and over the Mexican border to the United States.

Along with direct military intervention and economic policies, the war against drug trafficking is the prominent, “security” measure employed by U.S. imperialism. The war on drugs maintains Mexican, Colombian and other military forces under American control and keeps the bloodshed of the drug war outside U.S. borders. In this way, the United States disciplines the various cartels that directly supply narcotics to the United States.

The rise of drug trafficking as an “illegal” economic activity in Mexico and Central America oriented toward the U.S. market, coupled with different instances of political, judicial and military power, demonstrates the decomposition of the state. This is shown in the emergence of areas controlled by drug cartels, where the cartels exercise a power parallel to the state through the collection of “protection” taxes, “welfare and social assistance” activities and paramilitary forces that surpass local forces and rival federal ones.

The emergence of an “illegal” economic power and its territorial control (which some call the “narco-state”) must incorporate the social dimension of capitalist decomposition and its impact on popular sectors. The recruitment of young people from the working and poor classes is a result of unemployment and insufficient educational and cultural resources for youth.

One aspect of capitalist decline in Mexico and Central America is that many young people get sucked into the cartels in Mexico, or to the so-called gangs in the case of El Salvador, Guatemala and Honduras. Meanwhile, “democratic” society is clearly undermined by the militarization of the repressive forces and the impunity with which they operate.

At the end of the neoliberal boom, from 1998 to 2001, a strong economic crisis shook all of Latin America. The terrible conditions of the Latin American masses led to uprisings in countries such as Argentina and Bolivia. In 2002, the U.S. backed up a coup attempt against Chávez in Venezuela. By 2003, however, many economies were able to overcome the crisis and grow, thanks to the rising price of raw materials. This allowed the Pink Tide governments to rise. These new social-democratic governments co-opted processes of struggle and resistance —granting concessions to the masses without modifying their countries’ economic structure and without breaking their economic dependence on the United States.

Despite the limits of the Pink Tide to tear up the roots of political and economic dependence on imperialism, these governments did confront U.S. hegemony, and for a short time the strong chains of domination in the continent slackened. In response to this, former Democratic presidential candidate Hillary Clinton proposed a policy for Latin America that was not much different from Trump’s. In both cases U.S. policy toward the region is much more aggressive, in an attempt to recover its weakened hegemony.

In 2006, while the Pink Tide was stabilizing, Honduras had a center-right president, Juan Manuel Zelaya, who was gradually shifting to a more center position. He raised wages, improved the pension system and started giving out food at schools. These and other improvements were not radical changes, but they were enough to win him the consternation of the conservative sectors of Honduras. They were further infuriated when Zelaya joined the Bolivarian Alliance for the People of Our America (ALBA) and the Petrocaribe, becoming an ally of Venezuela, Ecuador, Cuba and Argentina. When he made it clear that he was going to make a plebiscite call for a constituent assembly, the right wing of the opposition decided to organize a coup.

Meanwhile, the U.S. government, under the supposedly “new face” of the Obama administration, was worried about losing influence and power in one of its main strongholds on the continent. Not only was the country’s alignment with the Pink Tide governments threatened, but the United States also feared the advance of China in the region. The Obama administration knew from the beginning that the military was willing to separate from the elected government of Honduras. In June 2009, under the leadership of Hillary Clinton, the United States allowed the Honduran military enough time to complete the coup, stabilize their control and call for “elections.”

It should be noted, however, that this intervention did not happen without resistance from the working class. While these negotiations were happening between Zelaya, the organizers of the coup and international organizations led by the United States, a huge movement of resistance appeared as a main actor in the conflict. This meant strikes and massive mobilizations against the coup. But the leaderships connected to Zelaya and the Pink Tide leaders preferred negotiation to developing a mass force.

The effects of this coup continue to be felt today. The last election in Honduras, held in November 2017, was marked by fraud and repression. Massive mobilizations took place in January when Juan Orlando Hernandez started his second term as president. From the time of the elections to the following January, more than 34 protesters were killed.

Latin America as a Semicolony

The history of military interventions in Latin America is the sharpest expression of American interest in the region, illustrating the empire’s need to maintain the economic, political and security chains that bind these two regions together.

These military interventions aimed to discipline the masses on the continent to accept without resistance the mandates of the World Bank and the IMF and ensure that Latin America remain an economic and military bastion of the United States.

The current migration crisis is one of the social expressions of the decadence of Latin American economies and imperialist interference. But it is also a crisis produced by the new division of labor wherein imperialist economies must regulate immigrant labor in order to continue generating profits from precarious work in imperialist metropolises. Imperialist countries must curb the wages of the native working class and control the masses of their own countries, presenting migrants as responsible for their own economic hardships. In these way, they have a double win: lower wages and a divided working class.

As we get closer to the 60th anniversary of the Cuban revolution, the working class and poor of Latin America are witness of the consequences of centuries of U.S. repression. The task of fighting imperialism is as important as ever.