The U.S. Is Using COVID-19 As An Opportunity to Steal Indigenous Land

In the midst of the COVID-19 pandemic, the United States government announced a move that would eliminate the Mashpee Wampanoag tribe’s jurisdiction over their own land. It is not an accident that this latest attack on Indigenous sovereignty and land is being carried out at a time when organizing and resistance are difficult, though not impossible. 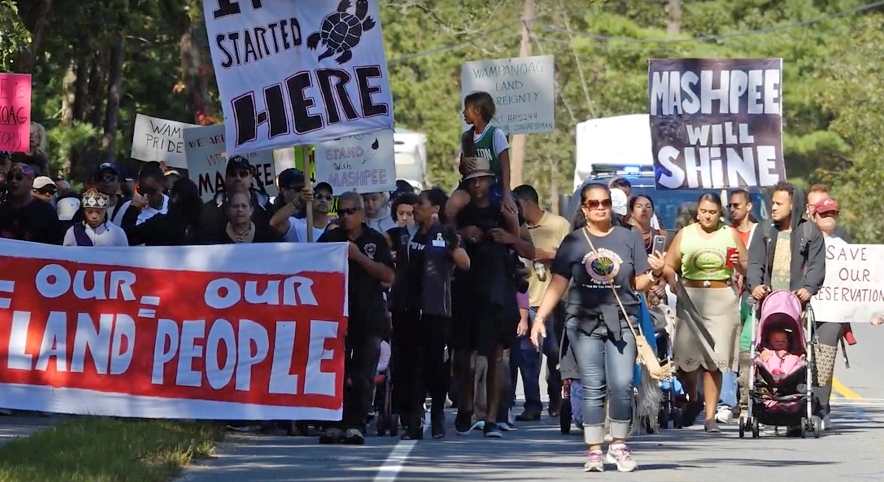 On Friday, March 27, as the COVID-19 pandemic continued to spread around the world and confirmed cases in the United States topped 100,000, the Mashpee Wampanoag in what is called Massachusetts learned that their reservation is to be taken out of trust. This means that in essence, they will no longer have sovereignty over their land.

This move by the Secretary of the Interior is a personal favor to the President. The Mashpee Wampanoag want to build a casino on their land, which could take business away from casinos owned by a close associate of Donald Trump. Indigenous sovereignty is always seen as a barrier to wealth accumulation for capitalists and their settler colonial state. This most recent attack is petty, but it has deep ramifications: it could cause an avalanche of similar moves against any tribe federally recognized after 1934 — most tribes in the northeastern United States. As Womsikuk James, who is Aquinnah Wampanoag, writes, this could be the beginning of a “bleak future…in which hundreds of other tribal nations, including my own… will lose their reservations, their lands, and, in the process, their right to self-determination as tribal nations.” This attempt is the latest in a long string of capitalist-settler violence towards and erasure of Indigenous people in North America and across the world.

The Mashpee Wampanoag view this latest land-grab attempt as connected to the history and continued reality of settler colonialism, and they plan to fight back. “We have survived, we will continue to survive,” wrote Cedric Cromwell, also known as Qaqeemasq (Running Bear), Chairman of the Mashpee Wampanoag. “These are our lands, these are the lands of our ancestors, and these will be the lands of our grandchildren. This Administration has come and it will go. But we will be here, always.”

Another Aquinnah Wampanoag member Kisha James tweeted, “The fact that they announced this in the middle of a global crisis is evil. The cruelty of settler colonialism has no limit.” The timing is no accident. COVID-19 has made it extremely difficult for communities and activists to organize against abuses old and new, because people are trapped in their homes, dealing with increasingly precarious employment and sick loved ones. Those who are still required to work outside of their homes are forced to expose themselves to infection in their workplace, but they face police repression in organizing and social contexts. The settler-capitalist state knows this and is using the crisis to advance horrific measures and to renew incursions into Indigenous land. For instance, the construction of the pipeline through Wet’suwet’en in so-called Canada continues, though public meetings about it are cancelled. Rather than provide the funding necessary to fight the virus and treat communities, the governments of Canada and Australia have sent body bags to Indigenous communities. Three states have recently passed laws criminalizing anti-pipeline protests, inspired by the harsh South Dakota law passed following the Standing Rock opposition to the Keystone XL pipeline.

The settler-capitalist state has little interest in offering relief for the vast majority in this crisis, let alone in taking the steps necessary to resolve the crisis. The capitalist state and its parties have no intention of offering relief to the working class, fixing the crumbling healthcare system, or otherwise taking care of people’s needs. Instead, they are using the crisis as an opportunity to attack the most marginalized in order to consolidate their own wealth and power. The settler-capitalist state has proven time and time again that it will use any excuse and any crisis to encroach on Indigenous sovereignty and enact violence on Indigenous people, communities, and land for their own gain. The COVID-19 pandemic has proved no different.