The U.S. Navy Poisoned Hawaii’s Water — and Covered It Up

In the latest instance of military pollution and cover-ups, the U.S. Navy has been leaking jet fuel into drinking water in Honolulu. The environmental movement must stand with victims of climate imperialism. 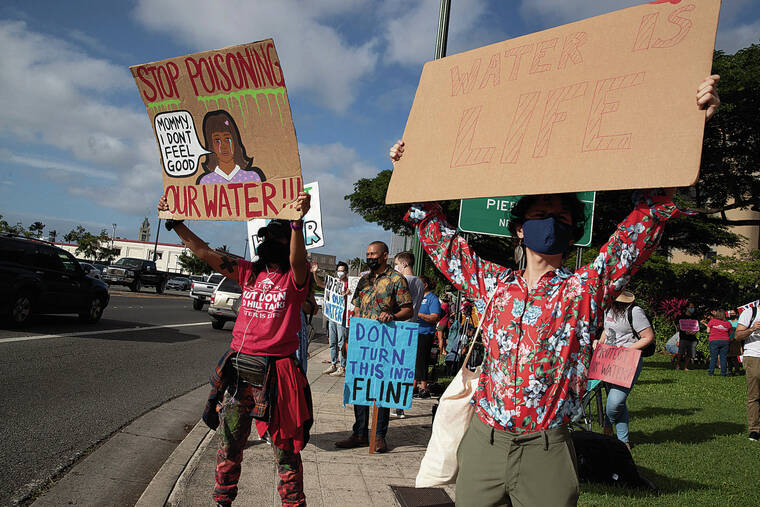 The U.S. Navy is responsible for poisoning a main source of water in Honolulu. For decades the Navy has maintained the Red Hill Bulk Fuel Storage Facility just 100 feet above an aquifer which supplies water to the Joint Base Pearl Harbor-Hickam and other parts of the island of O’ahu. The 20 fuel tanks at the facility were built during World War II and hold up to 225 million gallons of jet fuel, some of which has leaked into the aquifer below.

A statement by the O’ahu Water Protectors Coalition explains that leaks have occurred in past years and that the Red Hill tanks are “an environmental time bomb threatening the drinking water for 400,000 Oʻahu residents.” However, this issue only started gaining publicity in Hawaii’s local news outlets after families living on the bases with contaminated water started reporting that they could smell petroleum in their water and that they were experiencing symptoms including headaches, rashes, and diarrhea. It is still unclear how long fuel has been leaking into the water, and how many communities have had their water supply affected.

The Navy’s main response has been to cover up its negligence and stall any investigation. In fact, even after the State of Hawai’i Department of Health warned residents not to drink or use their water, the Navy claimed that as long as residents ran their pipes until the fuel smell went away, the water would be safe.

Given the many ways the U.S. military destroys fragile ecosystems and drives environmental collapse across the planet, it is essential that climate activists, particularly in the United States, make anti-imperialism a fundamental pillar of the movement for environmental justice. Environmental groups with massive platforms, such as Sunrise Movement, should be highlighting the environmental threat posed by the military and calling for the closure of U.S. bases and full reparations for communities the military has poisoned. This would be a much more meaningful use of their immense resources than directing people to support the Democratic Party which has given up on meaningful climate action and greenwashes U.S. capitalism.

Climate activists and the Left must amplify all cases of climate imperialism and military pollution and demand justice. Right now it is essential to show solidarity with the poisoned residents of O’ahu. The Navy cannot be trusted to hold itself accountable. Community members — not military officials — should be in charge of investigating the extent of the contamination. The fuel tanks at Red Hill must be immediately disposed of by environmental experts and community leaders. In the long run, the closure of Red Hill must be part of a larger effort to close all U.S. bases and uncover the full extent of military pollution and cover-ups.