The U.S. Tops the World in COVID-19 Deaths Per Day. This Is How We Got Here

The public health crisis unfolding in the U.S. as a result of the coronavirus pandemic may be unprecedented, but it was not unavoidable. Here are five measures that could have been taken to mitigate this tragedy and prevent countless deaths. 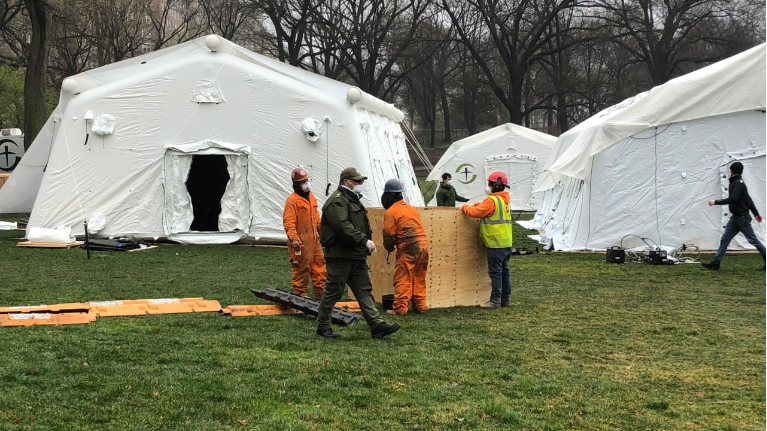 Yesterday, for the second day in a row, the U.S. was the country with the most COVID-19-related deaths in a single day. With 912 deaths on March 31 and 1,049 on April 1, the U.S. surpassed both Italy and Spain, whose numbers have now plateaued. Since the U.S. is two weeks behind Italy and Spain in terms of the curve of the pandemic, the numbers will keep climbing. Despite the unprecedented nature of the crisis, this public health disaster was by no means an inevitable “act of God.” The devastating toll could have been largely avoided with a concerted plan of action that could have substantially reduced the number of infections and deaths.

Here are five critical ways in which the Trump administration has failed to address the crisis:

1. Donald Trump repeatedly downplayed the coronavirus from the beginning. Even now, he has not yet launched a federally coordinated effort to contain the pandemic. On January 22, when the first case in the U.S. was diagnosed, Trump said: “We have it totally under control. It’s one person coming in from China. We have it under control. It’s going to be just fine.” Underestimating the spread and severity of the outbreak, hundreds, and later thousands of new infections went under the radar, untested, in U.S. territory.

2. The U.S. Government refused to use the tests provided by the World Health Organization (WHO), artificially creating a scarcity of tests. This led to (a) underestimating the number of cases and (b) making it effectively impossible to diagnose and trace contacts (South Korea’s strategy). The virus spread like wildfire, unnoticed by public authorities.

3. The government at all levels (federal, state, and city) refused to provide paid sick leave, even in the face of the looming crisis. This prevented sick workers and those at high risk of complications from staying home. Sick workers continued to go to work, as they do by default in the U.S. (70% of norovirus outbreaks in the U.S. are caused by sick food workers). As the CDC states, “1 in 5 food service workers have reported working while sick with vomiting and diarrhea. Fear of job loss and leaving coworkers short staffed were significant factors in their decision.” It’s easy to see how the coronavirus kept spreading. Recommending that people self isolate means very little if workers are forced to choose between staying home and getting paid.

4. The federal, state, and city governments failed to supply adequate personal protective equipment (PPE) to frontline workers; most unions refused to fight for it. As a result, healthcare workers are getting sick and dying of COVID-19 at alarming rates, contributing to an already severe staffing shortage. For-profit health corporations are particularly responsible. During the 2019 contract negotiations between NYSNA and the “Big 3” (Mount Sinai, Montefiore, and New York Presbyterian), management of the three hospital systems refused to address the lack of adequate staffing. Nurses have been demanding safe-staffing ratios for years; for-profit healthcare continues to undermine their efforts, even in the midst of a pandemic.

5. There is a critical dearth of ventilators. As early as two months ago, GM and other big industrial producers could have teamed up with medical device producers to churn out thousands of desperately-needed ventilators. Given industry’s failure to accomplish this, the government should have intervened in late January, brought these producers under its control, retooled them, and begun immediate emergency production of ventilators. Trump has only just invoked the Defense Production Act this month, and there are no publicly known quantity commitments nor deadlines for production of medical equipment. The weeks that passed with government inaction will be paid with avoidable deaths.

From the pages of Left Voice, we have argued for the nationalization of healthcare and other key sectors of the economy under worker control, including industries that can produce ventilators and desperately needed PPE. We have argued for a ten-point emergency program to address the social and economic crisis stemming from the coronavirus pandemic, including the cancellation of rent, an immediate freeze of layoffs, and worker control to guarantee safe working conditions and essential production that meets the needs of society. Only such a program can provide for the basic needs of the majority of the population in the current juncture.

What this crisis shows first and foremost is that this disaster was foreseeable, and thus, avoidable. The problem with capitalism is that it hears no reason. Production, distribution, and investment follow only one principle: the zeal for profit. For this same reason, we are rapidly hurtling towards the cliff of a climate catastrophe. The appalling magnitude of this sanitary crisis — the sheer number of deaths that could have been prevented — should be enough to convince millions of people that we need a democratically planned economy, where all resources of the economy are put to the service of the whole society. In short: We need socialism.