Trump recently sent the liberal media into a frenzy with his alleged remarks calling the Vietnam War “stupid” and its veterans “suckers.” But the Vietnam War was anything but. It was a reign of terror on a people who had recently won their independence and it preyed upon young, working-class Americans to push its capitalist, imperialist agenda. 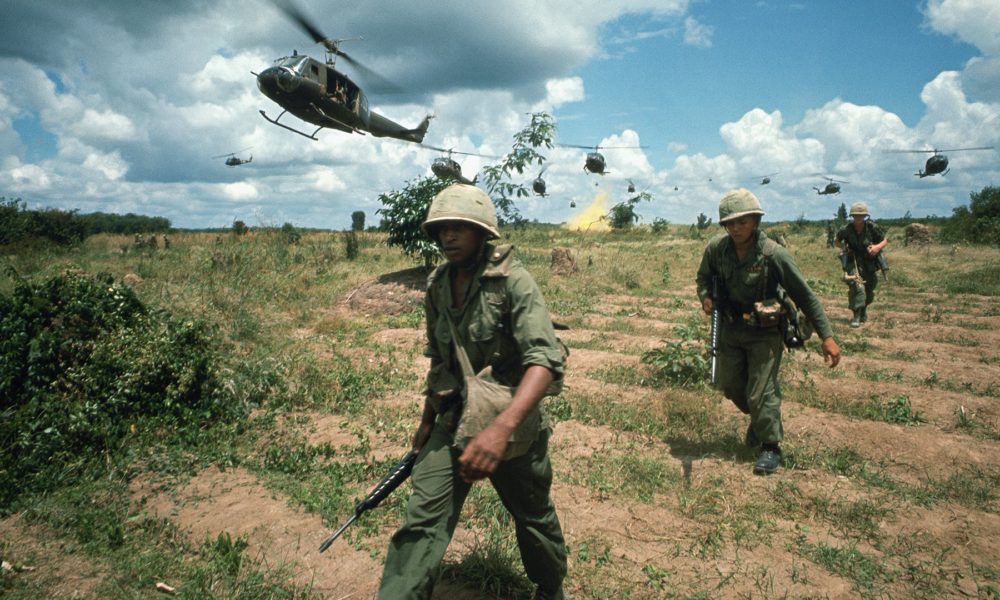 A media blitz has once again been launched by pearl-clutching liberals thinking they have finally found the worst thing Donald Trump has ever said. On September 3, The Atlantic published an article highlighting a series of statements and actions from Trump that showcase disrespect for American veterans. The story was immediately made the biggest news of the week. Fox News’s Jennifer Griffin added to the controversy by sharing that a former senior official with the Trump administration claimed the president once said of the Vietnam War, “It was a stupid war. Anyone who went was a sucker.”

The establishment has used this as another of many opportunities to reinforce America’s military culture, with neoliberal warhawk, Pete Buttigieg, hot on the press circuit and the pro-war, never-Trump conservative think tank, The Lincoln Project, getting pictures of veterans to trend on Twitter under the hashtag WeRespectVets. This rush to defend the honor of veterans is not actually based in any serious empathy for people who have been subjected to warzones, but instead a hollow attempt to score points in an election. The go-to response of Trump’s opponents in government and media obscures the violent imperialism and working-class exploitation of the United States military. Democrats and Republicans alike have made their careers and maintained their global power off of hawkish foreign policy. The war machine relies on support, or at least complacency, from the masses who gain nothing but misery from war, which is why politicians and their corporate media lackeys have spent more than a week pushing back against Trump’s public comments that highlight the real and pervasive threat of the military-industrial complex.

No one should believe that Trump’s comments make him a leader or even participant in the fight against the military industrial complex. His administration has been especially antagonistic to Venezuela, Iran, and China. However, although his statements are not coming from any place of anti-war morality, it would be a mistake to invalidate them entirely because it is rare that a break in the one-sided narrative of U.S. military propaganda is launched to such a large audience.

In fact, “stupid war” would be a generous description of what the United States did to Vietnam. A more fitting description would be, the atrocious, illegal reign of terror on a country fighting for its independence.

At the time, the narrative was that any country’s attempts to establish communism was part of a larger Soviet plot to take over the world. President Truman would go on to establish the Truman Doctrine, which provided military aid to any country fighting communism. More accurately, it provided military aid to any nation trying to suppress a movement challenging Western capitalist hegemony. This has remained the backbone of U.S. foreign policy to this day.

The theory of Monolithic Communism has since been debunked. Disagreements among communists in various countries were quite common and under Stalin the Soviet Union took a nationalist approach to revolution.

Historians have uncovered the fact that even during the Cold War, the vast majority of officials in Washington understood that there was no great plot of Soviet world domination. In his book The Jakarta Method,1 journalist Vincent Bevins provides a deep dive into the realities of C.I.A. plots during the Cold War and reached the conclusion that what threatened the United States the most was the thought of people around the world seeing a successful, peaceful communist government reaching the same or even greater economic prosperity as capitalist countries.

The magnitude of war crimes to which U.S. troops and their allies subjected the civilian population of Vietnam is hard to understand for anyone who has never been a civilian in a military occupation. The closest an American can likely come to understanding what the people of Vietnam experienced is by reading historian Nick Turse’s Kill Anything That Moves: The Real American War in Vietnam.2 Turse spends close to 300 pages highlighting stories of Vietnamese civilians who were terrorized and killed during the war. His research is collected through extensive interviews with American Vietnam veterans, Vietnamese civilians, and historical records. Most Americans are familiar with the atrocity that was the My Lai massacre, a largely reported event in which U.S. troops mass murdered South Vietnamese civilians. What Turse reveals is that My Lai level atrocities were the norm, and the American method of war in Vietnam was intentionally curated from the top down to encourage racist, unrestrained torture and brutality towards anyone Vietnamese, North or South, guerrilla, woman, old man, or infant.

Despite the lengths the U.S. military went in its attempt to gain control over Vietnam, it would go on to lose spectacularly. There are two key reasons for this. The first is that the United States underestimated the Vietnamese fight for independence. This was a country that spent much of its history occupied, and having just had a glimpse of its independence after defeating the French occupation in 1954, the Vietnamese people were not about to be ruled by another foreign invader. Through determination for independence and well-organized guerilla tactics, the people of Vietnam would go on to shock the world by expelling a powerful empire from their land.

Of course another important factor in Vietnam’s victory was the anti-war movement within the United States. Anti-war activism was not new within the United States, but it rose to never before seen heights in 1964 to 1973. People did not just draft dodge, they burned their draft cards in the streets. Students organized a national walkout and Ohio University was forced to close due to the strength of continued student organizing. The support of Vietnam veterans for the anti-war movement was essential. The hellish conditions of war that veterans were subjected to mixed with their disgust and regret for the treatment of the Vietnamese people would result in a mass march on Washington, a six day protest in D.C., and nearly 420,000 cases of desertion by soldiers.

The Vietnam War provides a compelling example of how a well-organized fight for independence can prevail and why it is essential for Americans to show solidarity with international causes. It makes sense that a magazine like The Atlantic and those who take The Atlantic seriously would want to push the much less challenging narrative that veterans are great and the president is terrible for not gushing over people’s service to the military industrial complex.

Of course there are genuine reasons to be disgusted by the president’s contempt. While their actions abroad should never be depicted as noble, many Vietnam veterans were young working-class individuals drafted into service under threat of imprisonment for refusing to serve. Even now, while the United States has no formal draft, many veterans are subject to a predatory economic draft which promises college education and financial stability to impoverished Americans, disproportionately focusing on Black and Brown communities. Individuals lacking in class consciousness and means of survival are easy targets and even if they are never subjected to war, the training they go through is a form of brainwashing with a serious mental toll, relying on psychological abuse, social isolation, and physical exertion to break down the critical reasoning skills and moral compasses of young people in one of the most important stages of their neurological development. This is its own unique form of violence on the working class and the left should fiercely oppose it.

Still, it is important that we oppose the military’s exploitation of working-class Americans in a way that does not disregard the humanity and experiences of the people in countries that U.S. troops terrorize. The term, “bringing the war home” is used to describe the experiences of American veterans who suffer from post-traumatic stress disorder (PTSD), but little emphasis is placed on the Vietnamese, Iraqis, Afghans, Syrians, Palestinians, and countless other populations whose homes are actually turned into war zones. Almost half a century has gone by since the Vietnam War ended, but the impact of chemical warfare still damages the health of Vietnamese people on a grand scale.

Like all presidents, Donald Trump has no interest in seriously opposing war. His categorization of dead veterans as suckers and his description of the Vietnam War come from his economic privilege which has allowed him to get away with holding views of disgust for anyone or anything that does not directly benefit him. Still, the words themselves are not the problem. The Vietnam War was an evil imperialist endeavor. While many Americans were swindled into fighting through a mixture of a coercive draft and clever propaganda and would later speak out against the war, that does not change the fact that the conflict was not morally gray. The Vietnamese side was fighting for their independence after centuries of foreign occupation. The United States was a foreign enemy invading people’s homes and subjecting them to nightmarish tyranny. It is right for people to be disgusted with the Vietnam War. The only noble thing about it was that the Vietnamese forces won independence against an imperial superpower, with the help of Americans who chose to fight along their own shared struggle with the Vietnamese instead of fighting along mindless patriotism. Any other depiction of the war is an act of imperialist propaganda.