It is no easy feat to be deemed too vulgar, too boorish, or too volatile for the Trump Administration — but Anthony Scaramucci managed that distinction. And in somehow demonstrating his ability to out-Trump Trump, he became latest White House employee to face the axe. This time, it took only 10 days on the job. 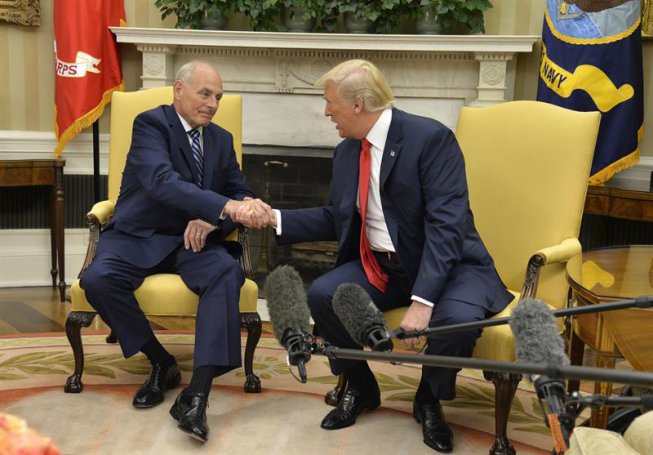 With the firing of his second Communications Director, Trump has now forced out six former allies occupying key posts in his administration. Scaramucci’s exit came only three days after the ouster of his rival, former Chief of Staff, Reince Priebus and 10 days after the resignations of the previous Communications Director, Mike Dubke and Press Secretary Sean Spicer. It bears mentioning that Trump is still in just the seventh month of his tenure.

This most recent purge, of course, follows the firing of FBI Director James Comey in early May and the removal of National Security Advisor Michael Flynn in February. Trump has now set his crosshairs on Attorney General Jeff Sessions, who has fallen out of favor with the president for recusing himself from the Russia investigation, leaving it in the hands of Special Prosecutor Robert Mueller. Sessions, we should remember, was an early supporter of Trump’s candidacy and the first sitting senator to endorse him. In July, Trump publicly expressed regret about hiring Sessions to the New York Times and referred to him as the “beleaguered” Attorney General on Twitter. In the same interview with the Times, Trump also suggested that Mueller could be removed too if he were to expand his investigation into the Trump family’s finances.

It is becoming apparent that no one in the administration — even those within Trump’s inner circle — is truly safe in his role. In July, CNN cited anonymous sources who claimed that Secretary of State Rex Tillerson could be gone before the end of the year. Tillerson refuted the report but did not sound too confident about his prospects either, declaring that he would stay onboard “as long as the President lets me.” And when Trump joked about the possibility of firing UN Ambassador Nikki Haley or HHS Secretary Tom Price, it is unlikely that his remarks were laughed off easily.

Trump has now enlisted his former Homeland Security head and retired Marine Corps general, John Kelly to right the ship as his new Chief of Staff. According to some reports, Scaramucci’s firing was, in fact, at Kelly’s request. As former head of United States Southern Command, Kelly oversaw military activities in Latin America and the Caribbean, including operation of the Guantanamo Bay prison. He has repeatedly defended the military’s continued use of the prison and was known for responding to a prisoner hunger strike with forced tube feeding.

Kelly is also the first military leader to be tapped as Chief of Staff since 1974 when Alexander Haig served under Nixon. Like Haig, Kelly will enter the job amid deep crisis and scandals. These scandals now include a new lawsuit alleging that a White House surrogate was the source of a discredited story tying the DNC to the murder of Obama staffer Seth Rich. Kelly’s selection can be seen as an attempt to bring order to an increasingly shaky administration, while strengthening the Bonapartist features of Trump’s presidency. Kelly was already the third general in Trump’s cabinet, the most any president has had since WWII.

FiveThirtyEight notes that there are now at least eight competing factions in the White House. The blog may have some of the alliances mixed up, but the point is generally correct. These factions range from the far-right wing represented by Steve Bannon, to establishment Republicans like Reince Priebus (prior to his firing), to ex-Democrats like Jared Kushner. Kelly will try to unite these disparate wings, but it won’t be an easily task. Aside from the ex-General’s complete lack of political experience, there are various, contradictory interests at play between advisers. Bannon, for example, built his brand not only on the most vile xenophobia and racism, but also on attacking Wall Street elites like Treasury Secretary Steve Mnuchin and National Economic Council head Gary Cohn, both former executives at Goldman Sachs. We’ve already seen the results of former New York Democrats like Scaramucci attempting to work inside the White House with long-time GOP operatives like Priebus.

Behind the White House crisis, a capitalist crisis

Corporate media has attributed the current upheaval to Trump’s petulant and abrasive personality, his insatiable demand for loyalty, and the unending Russia saga. While these have accelerated the current crisis, they do not, in themselves, explain it. Rather, the tumult in the White House is symptomatic of a continuing capitalist crisis and deep divisions within the ruling class about how to exit from it.

Despite gains made by Wall Street, economic growth in the second quarter of the year reached only 2.6 percent, well short of the rate predicted by analysts earlier in the year, and far below the 4 percent rate predicted by Trump upon taking office. This follows a first quarter that showed the lowest growth in three years. The New York times notes that consumer spending remains low due to “rising health insurance premiums and medical costs as well as onerous student debt payments.” As we pointed out in a previous article, we continue to be living through the weakest “recovery” since the Great Depression.

The divisions among capitalists are not expressed simply in terms of party lines. The Republican Party itself is divided like never before in modern history. The drive to repeal Obamacare, a Republican project for seven years, has stalled with Republicans holding the White House and both chambers of Congress. The project flatlined first because of the far-right wing of the GOP, who thought the proposed bill did not go far enough, and then by a more moderate wing, who saw that there was no plan in place to address the millions who would lose health coverage. The latter group was no doubt swayed by the enormous pressure they faced from below, expressed most visibly in the “town hall rebellions.”

As of last week, Trump’s highly-touted plan to tax imports has officially been killed by the GOP. A committee of six Republicans, including both Mnuchin and Cohn, was unwilling to move the measure forward. Most Republicans, and Democrats, are still far too committed to free trade and beholden to the many multi-nationals that produce oversees. Together with his shift on trade policy vis-à-vis China, the end of the border tax means that, because of establishment opposition, Trump has been able to achieve exactly none of his economic populist proposals that set him apart from the other GOP candidates during the primary race.

It is not just the economy in the narrow sense either that divides the capitalists. There is also fierce opposition by Republicans and Democrats to Trump’s attempts at easing relations with Russia. This pressure from the establishment forced the president to sign off on new sanctions against the Kremlin this week. There has also been a strong rejection by large sectors of the ruling class to the president’s withdrawal from the Paris Climate Agreement (a somewhat symbolic move, since the agreement was never binding), along with his Muslim ban, and restrictions on immigration. The latest measure proposed by Trump, which would slash the number of green cards offered in half, is sure to draw opposition from several sectors, particularly the tech sector.

Trump has been able to achieve exactly none of his economic populist proposals that set him apart from the other GOP candidates during the primary race.

The Democrats’ brand is still no better

Unfortunately for the Democrats, their party remains nearly equally divided and public opinion about the party is as low as ever. Despite Bernie Sanders becoming the country’s most popular politician, Democrats continue to field center-right, establishment candidates like Jon Ossoff in Georgia, signalling that the party leadership is unwilling to take much of a new strategy after their historical failure in 2016. The first Democrat to announce a White House run for 2020, John Delaney, is a millionaire, center-right Congress member. A Washington Post-ABC News Poll showed that only 28% of Americans believe the party is “in touch with the concerns of the average person.” As low as Donald Trump’s favorability ratings are, a recent poll showed Hillary Clinton with even less popularity. Macron’s resounding victory in France gave the leaders of the “extreme center,” to borrow the phrase of Tariq Ali, hope of a comeback. But neither protectionism nor neoliberalism will get us out of the current crisis, the effects of which are being felt hardest by working people, the poor, and immigrants.

The divisions among the capitalist class offer an opening for the development of an independent workers’ movement. But achieving gains for workers and oppressed people will require a leadership that rejects the two capitalist parties and which fights back, not only against Trump, but against the capitalist system that has paved the way for his reactionary program.