The women at the Hilton Hotel speak about their experiences in the fight to unionize the hotel. 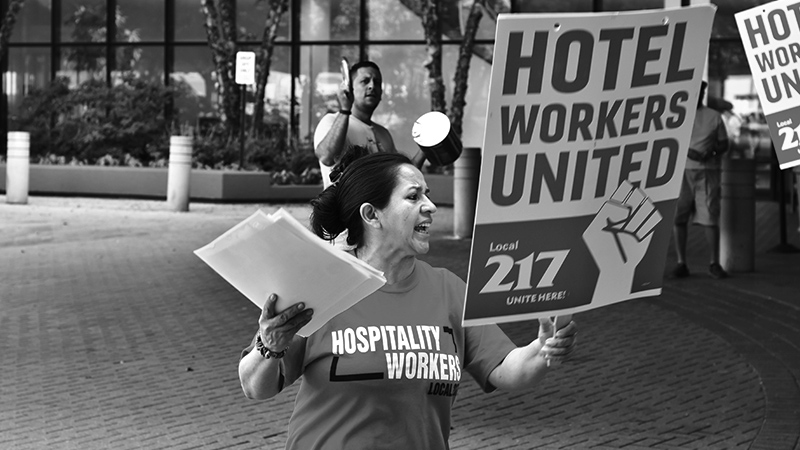 This article was originally posted on Truthout.org. Reprinted with permission.

Read the article in Spanish here.

An immigrant from Colombia, Maria Inés Orjuela lives in Bridgeport, Connecticut, and commutes to Stamford to work at the Hilton hotel for $11 an hour. Once health insurance is deducted, her biweekly paycheck is sometimes only in the double digits. She works in housekeeping, and before she and her fellow workers voted to unionize, this meant cleaning up to 36 rooms a day.

Orjuela is respected among her co-workers who are fighting for a contract at the Hilton. She, likewise, has an unwavering trust in them and in the strength of the larger working class. After all, despite the fact that the hotel had hired union-busting law firm Cruz & Associates and later, Jackson Lewis, to combat the workers, last December, Orjuela and her co-workers successfully organized a union with 110 workers voting in favor, and only five voting against unionization. In the end, Hilton spent millions on multiple “union avoidance” firms, flew in managers from other properties throughout the country and sat down workers for individual intimidation meetings with union-busters. None of this broke the spirit of the Hilton workers though, who are now in the process of negotiating a contract.

The unity among the workers has been no easy task. More than half are Haitian immigrants who only speak Creole. Others are from Central and South America and only speak Spanish. Only a handful speak English. These language barriers make union meetings challenging, but simultaneous translation, patience and practice makes organization possible.

Orjuela was elected by her co-workers to help negotiate the union’s contract and bargain with Hilton representatives and lawyers for higher wages and better working conditions. On the first day of negotiations, Orjuela said Hilton representatives demanded that she and her co-workers sign a document stating that they wouldn’t organize any further workplace actions. Orjuela only laughed, saying she wouldn’t give up so easily.

Despite working long hours, she and her co-workers walk or get rides to the union hall to discuss next steps. How will they win the contract they deserve? “The union is just the first step,” Orjuela told Truthout. “Now we need to fight for the contract. The union is a tool we can use to get better wages, have less rooms to clean and more benefits.”

Truthout spoke with Orjuela and some of her co-workers to discuss their experiences as women workers. The focus of their discussion was the struggles at their workplace, the lack of respect from managers, the number of rooms that they have to clean and the fear of organizing — a fear that they have recently conquered. When one worker asked another what the hardest part of her job is, the reply was: “Everything! Everything is hard!”

Indeed, many things in these women’s lives are hard. Orjuela’s co-worker, Eufrocina Vargas, for example, left her children and family behind in Colombia to move to the US. She rents a room from a landlord who refuses to let her have any guests. When workers come over to discuss union matters, they instead have to meet in the restaurant downstairs.

Many face similar struggles. “My life has been like a telenovela,” said Sylvia Pulido. “I brought my daughter here when she was 5 years old. We had to pay rent, pay for food even though I was living with my sister. We also had to find a school just to have someone to take of my daughter. I had to work three jobs to survive in this country. I was able to provide my daughter with a Catholic school education by working three jobs, and now she is in university. So now we are in another struggle, here at the Hilton. But I am used to fighting. I have fought my whole life.”

The women see themselves as strong and independent, different from the generations of women who came of age before the women’s liberation movement. “Before, people used to say women were fragile. Before, women only went to high school, and you were supposed to go find a boyfriend with a bit of money because you were supposed to be a housewife,” Pulido said. “Now, we have women’s liberation. Now we can work and study, and we are professional. Now we are showing men that we don’t need them to get ahead. We can advance on our own without their help.”

Another housekeeper, Ligia Leal, echoed this sentiment. “Women have evolved a lot. Things have changed a lot,” Leal said. “Even in my own country, Colombia, women work in all industries…. But there is still abuse against women.”

A workforce made up overwhelmingly of women, Hilton workers focus their strength in overcoming struggles, not on the hardship of the struggle itself. “In this struggle to create a union, we are mostly women in housekeeping. We got tired of abuse on the job, and we found the strength that we have as women to lead and fight for what we wanted, to make people respect our rights,” Orjuela said.

The women at the Hilton embody one of the central principles of the International Women’s Strike — that workers’ rights are also women’s rights. They don’t see the central division in society as a gender division. In fact, at the 2018 International Women’s Strike kickoff panel in New York, Orjuela spoke again and again about the need for workers to build strong ties. Workers of all genders “must be like a chain, unbreakable like a chain,” she said.

They understand that they must also have their male co-workers fighting alongside them to achieve their rights.

“I came from a country where I used to work a lot…. I never thought I would have to work this hard in the US. The bosses break us. I would look around at other housekeepers and say, ‘We can’t do this anymore.’ This pain unified us women. It unified us in housekeeping,” Leal said. “The language barrier didn’t matter. We made ourselves understood by [the Creole-speaking housekeepers]. We were supposed to smile and take abuse, so we had to unite to build the union. Women can do many great things! I wish all workers would unite — men and women. It’s hard because people just live their lives day in and day out, and don’t react to things.”

But even while focusing on building unity between men and women workers, the Hilton housekeepers still experience the particularities of being women in the workplace. When one male Hilton worker said that he felt that men and women have equal rights today, Orjuela was the first to respond. “In some ways, he is right. We have accomplished a lot. Even presidencies,” Orjuela said. “But still, women have to do some of the worst jobs. Like us, we are in housekeeping. We do the cleaning. The same thing we do at home, we have to do it outside the home. So, we still have to fight to be respected. There isn’t just labor abuse. There is also sexual abuse, which many women suffer. It has to end. And fear also exists — the fear of denouncing, the fear of coming forward.”

All of the women I spoke with highlighted how they overcame that fear and gained the strength to speak, to unionize and to organize despite threats from the bosses.

These Hilton workers — while smaller in number than the West Virginia teachers that went on strike — express many of the same sentiments. They know they must trust in their own strength as workers to win the contract they want. They know that class unity across racial and language barriers is the key to winning, and just like in West Virginia, women are leading workplace struggles. As Orjuela says, “From abuse, we gained strength. Every day, we are showing that women are strong, and we can be leaders in any way we need.”