The Women’s Movement in Turkey

Ecehan Balta of the socialist collective Başlangıç Kolektifi speaks about socialism, the women’s movement and the International Women’s Strike. 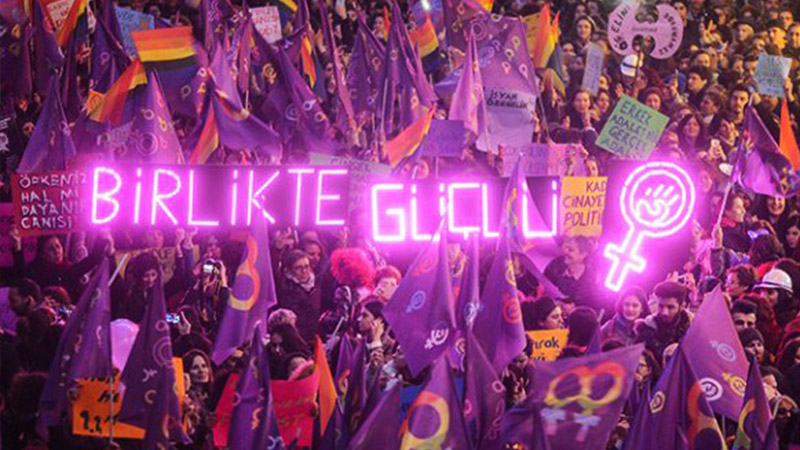 The women’s demonstration in Istanbul last year on march 8, 2017. It reads: Together we are strong

Arielle Concilio of Left Voice spoke with Ecehan Balta of the socialist collective Başlangıç Kolektifi to discuss women’s struggles in Turkey and the importance of building an international women’s movement.

Arielle Concilio: What are the most important women’s issues in Turkey today? How are women responding to these issues?

Ecehan Balta: I should first say that women’s issues are almost the same across the world at the current stage of capitalism. Neoliberalism has lost its domination, but no real alternative has appeared yet. That’s why general social security systems unravel, as flexible and precarious jobs become the rule. Even though growth rates are positive, this is growth without employment in most “developed” or “developing” countries. Taking these factors into consideration, I think that the concept “feminization of labor” now applies more than ever before. On the other hand, the impoverishment of women has reached another, much more brutal stage. There is no more unemployment pay, no universal social security schemes covering poor women and children, and no secure jobs for us.

Far from reaching “equality” or “equal opportunity” at work, health, and education, we women all around the world are thousands of miles away from reaching these basic services. And in this new stage of the accumulation regime, women’s reproductive and care labor is excessively exploited: Worldwide economical and ecological crises push women to work harder at home to provide care for children and the elderly, prepare food, carry home water from sources that may lie tens of miles away, perform home-centered work (often piece work) and agriculture — which are generally unpaid since they are not considered to be real work — and to reproduce the labor force (through pronatalist population policies).Across the world, pronatalism and home-centered work without social security result in a firmer control over women’s labor and bodies.

Naturally, however, each country’s historical, social, and cultural conditions determine the means for achieving this end. Until the 1970s, Turkish growth was based on agriculture, that is unpaid family labor, and before the 2000s, the country had adopted an anti-natalist population policy, was a candidate for EU membership, and Sunni Islam had not penetrated state institutions even though it occasionally joined ruling coalitions. In the 2000s, before the failure of neoliberalism across the world, women’s fierce struggles in Turkey brought about significant gains in a relatively short space of time. However, we should not forget that the starting point was quite low: Turkey had failed to rise higher than the 100th spot even on the GGG Index (WEF Global Gender Gap Index), a liberal instrument for measuring gender equality.

However, Turkey is now falling back towards the 130th place. After the arrival of the Islamist AKP (Justice and Development Party) to power in 2002, there appeared attacks against Turkey’s relatively liberal abortion law. Until 2015, single women and married women — the latter with the consent of their husbands — could freely get abortions at private hospitals. Although a proposed amendment to the law restricting the right to an abortion was cancelled due to women’s protests, in actual fact, it has now become very difficult, if not outright impossible, to get an abortion at state hospitals and even private clinics. President Erdoğan announced his pronatalist policies, urging women to have at least three children, and then went on to increase this figure to five. The fertility rate is indeed on the rise. The government also amended the Labor Code to introduce flexible work for women.

As is the case across the world, violence towards women is a key instrument for the control of women’s bodies in Turkey. There are no regular studies on this issue in Turkey because there is a lot to be hidden under the rug. According to a survey in 2008, every other woman has experienced sexual, physical, or psychological violence. This figure probably understates the real situation even back then because we know that most women struggle to identify psychological violence and, for instance, rape within marriage. Numerous NGO reports have confirmed that violence towards women has indeed increased since 2008. Another critical issue is femicide, and there is no scientific research on this topic either. Yet, during discussions at the parliament, it was revealed that femicides soared 1400 percent from 2003 to 2013, according to reports by the “Ministry of Family.”

As a result of the dissolution of agriculture, women are being pushed out of production (even if unpaid), bringing down the female employment level. Furthermore, more than 50% of women are employed in the informal sector. Women’s education level is also very low in Turkey. Of the 40 million women living in Turkey, 5.6 million are either fully illiterate or semi-literate.

Then, cutting across all these inequalities we have a Sunni Islam ideology (which is authoritarian and in the spirit of the times) that has penetrated the society and taken over the state. This ideology argues that all of the aforementioned developments are natural, that a woman’s place is her home, her duty is to care for her husband and children, and that women’s participation in mixed-sex education and formal employment leads to the corruption of family life. The president gives voice to these arguments, and his party polls around 40% at the ballot box.

AC: Can you tell us about the socialist women’s movement in Turkey?

EB: The history of the women’s movement in Turkey goes back to the second half of the 19th century. In the Ottoman era, there were women’s organizations that defined themselves as feminist and issued weekly magazines. These organizations were quite active during the foundational period of the Turkish republic. In 1934, women obtained the right to vote; however, the ruling Kemalist CHP (People’s Republican Party) closed down the Turkish Women’s Association, probably in fear that they would make further demands. Then we have a long gap right up to the 1970s, or maybe we know very little about this period since there are few scholars studying women’s history. Nonetheless we should note that in this period, a woman, namely Behice Boran, presided for nearly 5 years over the Workers’ Party of Turkey (TİP), which was the first socialist party to enter the parliament in Turkey. In the 1970s, women’s groups were mainly situated under the umbrella of socialist organizations; however, structures such as the Progressive Women’s Association (İKD), the women’s branch of the clandestine Communist Party of Turkey (TKP), were quite powerful.

The military coup of 1980, which also aimed at changing the labor regime and upheld post-Fordism, dealt the heaviest blow to socialist groups. A total of 230 thousand individuals, most of them leftists, were put on trial. All socialist groups, along with civil society organizations, became so fragmented that they could not take any action in the coming few years. In this period, the feminist movement started to rise to prominence, first because of the impact of the international feminist movement, and also through a questioning of the strong machismo of the socialist movements before the coup. In a sense, this presented an “advantage” for the feminist movement in Turkey since from the beginning it was constructed mainly by socialist women. Even today, socialist women can be said to form the core of the feminist movement, in terms of both theory and practice. On top of this, we must also mention the Kurdish women’s movement, which has not only created its own structures in the last ten years but also come up with original theoretical debates and concepts, such as “’jineology.”

I have to mention that the violent crackdown on the Gezi movement, when two million people took the streets against the government, and the disruption of attempts for a peaceful solution of the Kurdish conflict have further reinforced the authoritarian drift which leaves no breathing space for the social opposition. Naturally, the women’s movement is not immune to this authoritarianism. Nonetheless, hundreds of thousands of women came together in last year’s March 8th demo, clearly showing that women are one of the strongest bulwarks against this drift.

AC: Are there plans for International Women’s Strike in Turkey?

EB: First of all, I would like to say that we all watched live, with huge excitement, as our sisters in the USA took to the streets en masse during Trump’s inauguration. Likewise, we were thrilled to witness the women’s strike taking place in 55 countries, especially in Latin America, the USA, and Europe. Another important aspect of the strike, in my view, is that it reminds those women who oppose only Trump or neoliberalism that in fact capitalism is what lies at the root of the problem. Due to the situation that Turkey finds itself in, we failed to respond en masse to the call for a strike. Nonetheless, as your sisters we protested in the street and tried to discuss here the idea of a women’s strike. We are all cognizant that the neoliberal regime of accumulation, at its current stage, can only prevail if it establishes control over women’s labor and movements. We are a part of the international struggle being waged to prevent this from happening. That is because we are well aware that this struggle has to be international. Furthermore, we are determined to struggle against all of its repercussions, in particular femicides. In this vein, we have started to discuss IWS 2018. To conclude, we believe that we will prevail only if we stand together.