The Working Class in Mexico Demands: “We Want to Live!”

In a speech given at the international rally of the Trotskyist Fraction this May Day, Flora Aco, a leader of the Socialist Workers Movement (MTS) in Mexico, spoke about the austerity measures the “progressive” government of Andrés Manuel López Obrador (AMLO) has taken in the face of the public health and economic crises. 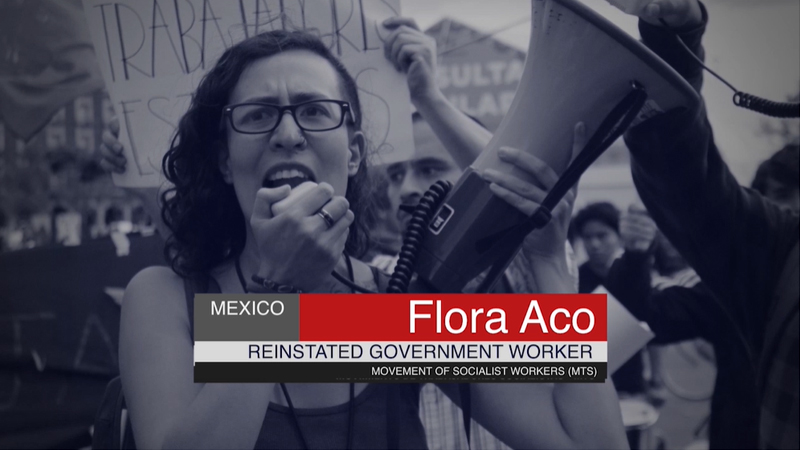 Hi comrades. My name is Flora Aco, I am a precarious state worker and a representative for the group Pan y Rosas in Mexico. I was fired for organizing a labor rights movement in Mexico City, and after a political battle in the streets, I was rehired.

This May Day is historic in Mexico. Although López Obrador’s government claims to be progressive and is setting up some small social programs, it is also confronting the COVID-19 crisis with a plan that increases austerity against workers and further capitulates to the United States government.

Lopez Obrador has not halted layoffs, although they already exceed 350,000. 2 million more layoffs will happen as a result of this crisis — in a country with 30 million informal and precarious workers who have no guaranteed income.

Also, at Trump’s order, the National Guard acted as Yankee border patrol against our migrant brothers and sisters.

But in Mexico, which stands at the gates of the world’s main imperialist power, we — the workers — began to fight against the health crisis and the economic crisis. And it is women who are on the front line.

In a country with the most femicides on the continent, it is women workers like nurses, doctors, and janitors who are leading the rising protests within the health sector. They are demanding ventilators and PPE, like masks and gloves, and are facing the consequences of this government’s disastrous health policy.

It is also mostly women who, in the midst of the pandemic, have been supporting the two-month strike taking place at Notimex News Agency and the University of Chapingo — defending their labor rights.

At the same time, on the northern border, in working-class cities such as Matamoros, Juarez, Tijuana, and Mexicali, a strong movement within the factories is rising. In dozens of U.S.-owned factories, workers are fighting to stop non-essential production and to continue to receive their full salaries.

As factories are becoming hotspots for infection, there is a historic movement of wildcat strikes and riots against the terrible conditions of exploitation, layoffs, and government negligence. They demand: “we want to live.”

That is why we demand a ban on layoffs, 100% paid leave, and the expropriation under worker control of any company that violates labor rights.

With great pride, I want to say that Izquierda Diario México, which  is part of an international network, has become a voice of the workers who are struggling around the country — from the factory workers, to migrants, and indigenous peoples defending their lands.

We are beginning to lay the ideas for a revolutionary program and we want to achieve even more! That is why we support the call for a Latin American Conference put out by the Left and Workers’ Front (FIT) in Argentina.

Although the conference is postponed because of the pandemic, this call is a very important step that shows the agreement among parties which claim to be socialist and working class, which fight for the political independence of workers, and which raise the banners of anti-imperialism, seeking the unity of our class and oppressed people throughout Latin America with the U.S. working class, which is largely represented by a Latinx community. We in the Movement of Socialist Workers (MTS) believe these elements are integral in building an internationalist, socialist, and revolutionary organization. Long live the international working class!