The Working Class Is Back

Editorial for Left Voice magazine #4: We don’t want to be stuck in an endless cycle of resistance to the endless deprivations of capitalism. We want to win. 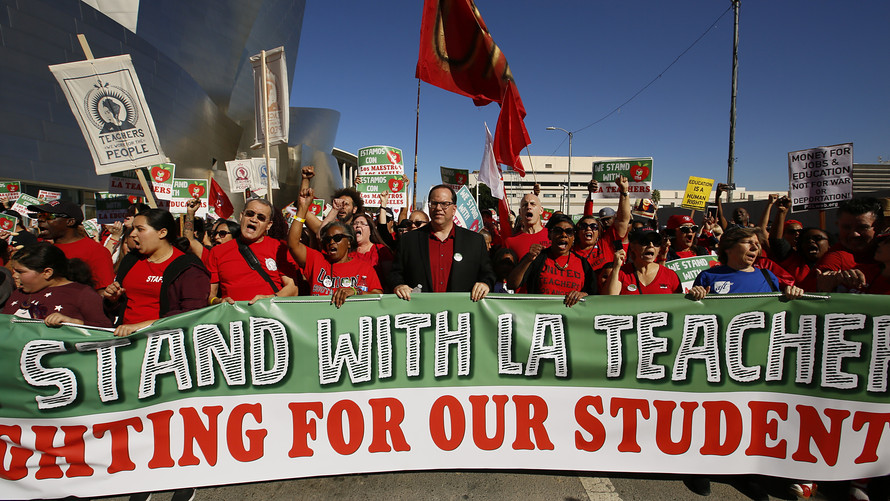 As this magazine goes to print, the government shutdown of December and January 2019 has just ended. For over a month, Donald Trump left 800,000 federal workers without pay in order to get $5.7 billion for a border wall.

The Democrats seemed totally powerless to stop him. House Speaker Nancy Pelosi postponed Trump’s delivery of the State of the Union address, and her caucus voted for a resolution to fund the Department of Homeland Security—including the deportation agency ICE. None of this “resistance” had any effect. Trump claimed the shutdown might go on for years.

The fight only ended when more and more air traffic controllers called in sick. As air traffic on the Eastern Seaboard began to break down, Trump—after 35 days—suddenly capitulated and workers got their paychecks.

So in the end, it was workers’ actions that forced Trump’s hand; a group of air traffic controllers had more political power than the entire Democratic Party. Clearly, if the thousands of airport workers who had been forced to work without pay had simply crossed their arms and refused to work, they could shut down a big portion of the U.S. economy.

The liberal blogger Kevin Drum from the magazine Mother Jones was upset. “I dunno. Is this what we want? Do we really want the folks who run our air travel system to have this kind of power?”

That’s the thing, though: Workers do have that kind of power, whether liberal bloggers want them to or not. But this enormous power is seldom visible, as workers are held back by union bureaucrats and “democratic” capitalist politicians. (Ironically, Mary Harris “Mother” Jones, the workers’ organizer, said in 1910: “I long to see the day when labor will be in the White House and in the halls of Congress,” and “we’ll take the mines and run them for ourselves, rather than starve.”)

During the shutdown, tens of thousands of Los Angeles teachers went on strike for six days. LA educators are fighting for not only better salaries for themselves but to improve the learning conditions of their students, and this resulted in massive support from parents and the community during the strike. Teachers in other parts of the United States are preparing their own strikes as the Teachers’ Spring continues to sweep across the United States.

But it’s the strikes in Los Angeles that are revealing a fundamental truth. The first #RedForEd protests took place in Republican, right-to-work states like West Virginia and Arizona. Here the goal was clear: flood the capitol and demand that red-state legislatures and governors provide more money for schools. But Los Angeles and the rest of California have been ruled by Democrats for decades. And blue states don’t treat teachers any better.

Governor Gavin Newsom, Mayor Eric Garcetti, and other Democratic Party politicians have had nice words for the striking educators. But in practice, they implement the same austerity policies that deny decent education to wide sectors of the working class—especially Black and Brown people. They direct public resources to charter schools in order to break the power of teachers’ unions, all while they send their own children to private schools.

The Democrats are the friendly face of the bourgeoisie. But they represent the same fundamental interests: a tiny minority that exploits the labor of the vast majority. Democrats have a very different rhetoric than that of the GOP, but are their policies so different? Yes, they refuse to provide funding for Trump’s Wall… but they do want to spend countless billions on “border security.” And it was Obama, not Trump, who first put immigrant children in cages. Obama deported more immigrants than all previous U.S. presidents combined; Trump, despite his hate-filled rhetoric, still has a lower deportation rate than his predecessor.

To compensate for endlessly betraying their voting base, the Democratic Party is building itself a new image. 29-year-old Congresswoman Alexandria Ocasio-Cortez appears on television nearly every day with demands to tax incomes over ten million dollars at 70 percent. She is calling for a “Green New Deal,” including an end to the use of fossil fuels within twelve years. AOC, a member of the Democratic Socialists of America, is owning terms that were once used as insults in mainstream politics: she calls herself a socialist and a radical.

This means a break from that neoliberal mantra that there is no alternative to free-market fundamentalism. Now people are discussing a reorganization of society so that health care, education and housing are basic human rights instead of a source of profit.

At the same time, AOC is spreading a dangerous illusion. She wants people to believe that the kind of radical changes we need can be accomplished within the institutions of capitalism. Her plan is to transform the Democratic Party, then Congress, and then the White House. The problem with this logic is that the state is not a neutral arena where workers and capitalists contest for an advantage. The state is an instrument to protect the interests of the capitalists. Congress, the presidency, the courts, the bureaucracy, the police – all these institutions exist to protect the property of the rich. That is why it has never been difficult for them to co-opt and corrupt individual “radical”, “socialist” politicians.

The ruling class already has two parties to manage its interests. The working class needs its own.

There are fierce debates happening within the U.S. left as to the correct way forward. Many believe that the best path passes through the Democratic Party. We sharply disagree with Bernie Sanders, Jacobin Magazine and the leadership of the DSA, who all argue that socialists can use the Democratic Party to win improvements in the lives of working people. Such socialists are inevitably used by the Democrats. We don’t believe that socialism can be achieved via a process of reforms.

Rosa Luxemburg, who was murdered 100 years ago, said it best: “People who pronounce themselves in favour of the method of legislative reform in place and in contradistinction to the conquest of political power and social revolution, do not really choose a more tranquil, calmer and slower road to the same goal, but a different goal. Instead of taking a stand for the establishment of a new society they take a stand for surface modifications of the old society.”

We think that the working class needs to fight for reforms, but only as part of a strategy for breaking the power of the capitalists, destroying their state, and creating a new society democratically run by working people. This is the kind of party we are fighting for in the U.S.: working class, internationalist, feminist, multiracial, and completely independent from all wings of the bourgeoisie.

This magazine is in the service of this debate. To better understand our tasks as socialists today, we are looking at experiences of the left in other countries, as well as studying the history of our own class.

We were raised to believe that the American Dream of going from rags to riches made the class struggle unnecessary. But the ongoing crisis of U.S. capitalism is proving that we live in the same system of crisis and wars. We don’t want to be stuck in an endless cycle of resistance to the endless deprivations of capitalism. We want to win.