Confronted with an impending recession, the U.S. capitalist class and the politicians who serve it are working overtime to protect their profits and wealth and keep their system intact. But none of the “rescue” measures that are coming at us from every quarter are about protecting the interests of the vast majority of workers and other people who face the greatest economic threats from the coronavirus pandemic. 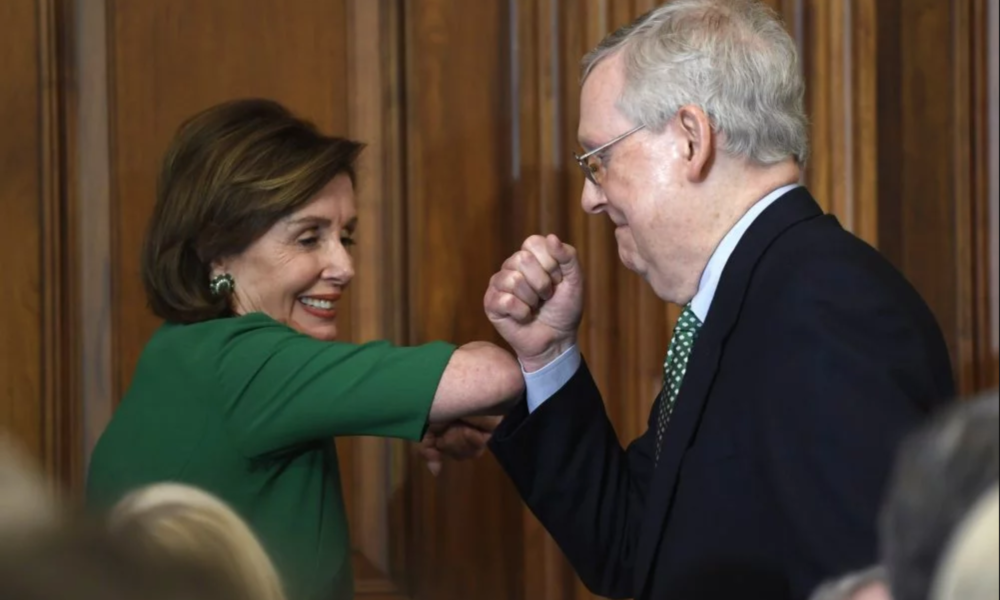 The Trump administration is, as this is being written, working to create “emergency stimulus” legislation for Congress to pass and the president to sign. On Tuesday evening, March 17, the package was becoming increasingly complex as more and more “rescue” elements were added at the request of various sectors of the capitalist economy. As Politico reported, it was “set to quickly balloon into trillion-dollar territory in the coming days, the largest rescue in modern American history, as major industries flood the Trump administration and Capitol Hill for aid while huge swaths of the economy stall from the coronavirus crisis.”

Let’s take a look at what’s being proposed and ask a straightforward question: Whose interests do these measures serve? The starting point for getting to the answer is to understand that in every case, these measures involve using our money and giving it to the bosses — with just a few proposed exceptions to give a little bit of it back to some of us directly. The government has no money of its own. Period. Full stop. What it has comes from us.

First up is what the House of Representatives sent to the Senate at the end of last week — a package of sick pay, emergency food, and free coronavirus testing. Already, it’s been whittled down by Republicans, who stripped away most of the guaranteed paid sick leave, which already was going to cover only about a fifth of all workers. “It’s welfare,” complained at least one Republican, but Senate Majority Leader Mitch McConnell advised his colleagues, “Gag and vote for it anyway.”

That’s what they did on March 18, but the Nancy Pelosi plan was never going to rescue capitalism. That’s where the latest proposal comes in — a desperation move aimed at halting a recession.

First, and easiest to dispense with, is sending checks. In the late morning of March 18, the Treasury Department announced it wanted to dispense $250 billion in direct payments beginning on April 6, with another $250 billion round on May 18. These would be checks sent to individuals with the objective of putting some money back into our hands so we can buy things and meet our regular expenses.

The U.S. population is roughly 330 million people. Payments totaling $250 billion would mean less than $700 per person. But that’s not how it works. A family of six with two adults would get the same amount as an individual with no children. And the idea that the government will get these checks out to everyone is, frankly, ridiculous. Not to mention that it’s not enough to cover most people’s expenses under any circumstances, and the current situation is one in which people are losing their incomes rapidly, so those expenses and needs are piling up. Furthermore, April 6 is nearly three weeks away!

What else is in the Treasury Department proposal? There’s another $200 billion in “industry aid,” including $50 billion in loans for the airline sector. Airlines are not the only companies looking for our tax dollars to be sent their way. As the Associated Press reported, “A roster of America’s big and small industries—airlines, hotels, retailers and even casinos—lined up for hoped-for aid.”

Early reports are that there are conditions regarding executive pay, but if you think CEOs are going to be forced to suffer the way the working class is suffering, then you’re dreaming.

Trump is also itching to include some kind of tax cut, which he’s been talking about since the crisis broke out and which he clearly sees as beneficial to his reelection campaign. On March 10, he proposed a payroll tax cut to last “at least through the election,” as NBC News reported. Payroll taxes, distinct from income taxes, are the deductions that come out of your paycheck to fund Social Security and are matched by employers.

This is a windfall for the bosses that would do nothing to help the most economically vulnerable workers. It would obviously apply only to workers who actually receive paychecks, so it would be meaningless for the millions of workers who are going to be laid off. At the more structural level, as a Penn Wharton Budget Model (PWBM) study shows, it won’t help even low-income households that continue to receive paychecks. “Households in the bottom 20 percent of incomes — those households with the highest willingness to spend their tax savings — would receive about 2 percent of the total tax cut …” and “only about 33 percent of this group would receive any of the tax cut, as many of the lowest-income households have neither wages nor self-employment earnings and thus pay no payroll taxes under current law.”

It’s unclear whether Congress will take up this part of Trump’s proposal, but plenty of other measures are being taken to protect the capitalists. On March 15, the Federal Reserve launched a new lending program, the Commercial Paper Funding Facility, to make sure big business has access to cash. The Treasury Department threw in $10 billion from its Exchange Stabilization Fund. Again, that’s our money.

The bottom line in all of this is encapsulated in a simple statement made by Richard Prisinzano, director of policy analysis at PWBM, to Yahoo! Finance. Trump’s proposal is “skewed to the top.”

Déjà Vu All Over Again

In the face of a global pandemic that promises to wreak economic havoc on the vast majority of people for a very long time, the capitalists are busy carefully crafting piecemeal solutions aimed at shoring up their private ownership, maintaining the ongoing transfer of global wealth to a relative handful people at the top, and throwing just enough of a bone to the masses of people to keep us from taking things into our own hands.

We’ve been here before, not that long ago. In the words of the immortal baseball player Yogi Berra, “It’s like déjà vu all over again.” The year was 2008, and that September 15, Lehman Brothers — the fourth-largest investment bank in the United States — filed for bankruptcy protection. It was sinking as quickly as the Titanic, its clients seeking high ground, its stock tanking on the market, and its assets subjected to a barrage of devaluations by credit-rating agencies. The immediate result was that global markets collapsed.

Just like victims of coronavirus in Wuhan, China, Lehman Brothers was the first big victim of a deadly virus. Like COVID-19, it was an infectious agent that replicates inside living organisms. But in 2008, the living organism was the global capitalist economic system, and the specific virus was spawned not organically but by capitalist speculation and excessive risk-taking in subprime mortgages. Lehman was the proverbial “canary in the coal mine.” Its sudden demise mushroomed, eventually becoming an international banking crisis, which led to massive bailouts of financial institutions — predicated on the “too big to fail” idea promoted by the U.S. capitalist class. A global economic downturn followed, which opened up a period now known as the “Great Recession” — a period of economic decline the International Monetary Fund described as “by far the deepest global recession since the Great Depression.”1 To this day, most economists consider it to have been the second-worst downturn in recorded history.

The “too big to fail” argument has become a favorite of the capitalists. It goes like this: there are certain players in the economy — very large corporations, and financial institutions in particular — that play so central a role, that are so interconnected with all the other aspects of the global economy, that if we allow them to collapse in a crisis, the ripple effect could potentially bring the entire economic system to its knees, with devastating losses. These financial institutions control the levers of the capitalist economy: they hold the debt of governments; they capitalize the major projects of the capitalists; they are the major lenders to entire industrial sectors; and most importantly, they are the primary conduit for the benefits that accrue to the tiny fraction of the planet’s population that controls nearly all of the wealth, both monetary and in resources.

Failure, the capitalists argue, cannot be an option. In a crisis, they need government protection not only in the form of economic policies but direct infusions of cash from the government themselves. Of course, governments don’t really have their own cash. That money is yours and mine.

The infusion after the Lehman collapse came very quickly, in the form of the “Emergency Economic Stabilization Act of 2008” signed into law on October 3. Its $700 billion was first used to buy mortgage-backed securities that were in danger of defaulting, taking the banks, hedge funds, and pension funds that held them off the hook in an effort to renew confidence in the global banking system and end the financial crisis. But there was more, including the direct bailout of a giant insurance company, AIG, to the tune of $68.7 billion, and another $80.7 billion to keep America’s Big Three automakers — Ford, General Motors, and Chrysler — from going under.

Again, the argument was “too big to fail.” We cannot allow the ripple effects to destroy the world capitalist economy. Putting aside that the very idea of such government intervention flies in the face of capitalism’s insistence that the best thing is always to let the market “play out,” these infusions of taxpayer money served to ensure that the giants of capitalism could keep generating profit and dividend for their most important stakeholders — members of the capitalist class itself, at its highest echelons. Sure, some jobs were saved, but that was an afterthought. And sure, some money was used to help a small percentage of the working-class Americans whose homes faced repossession. But the overwhelming bulk went directly into the pockets of the wealthiest people.

Almost before the ink was dry on the deal, the big bankers and financiers were already talking about the bonuses they would give themselves for having saved the economy and their companies — again, with our money.

That’s where we are again.

On March 17, Left Voice proposed “A 10-Point Emergency Program to Tackle the Coronavirus Epidemic in the U.S.” It spells out basic measures to “tackle the health emergency, address the needs of working-class families, and provide … basic income security and living conditions to the vast majority of the population.” It is the actual “war-like mobilization” we need to confront the coronavirus in the interests of the working class, not to protect the bosses.

Exponential growth in the numbers of infected people means time is running out. If there was ever a time for us to put our faith and energy in our own ability, as a class, to resolve our own problems and emancipate ourselves from the shackles of a system that is now literally aiming to walk death up to our doors, it is now.