Their Violence and Ours

Capitalist politicians of all stripes are condemning “violence.” But they never mean the daily violence committed by the police. They are condemning resistance against state violence. 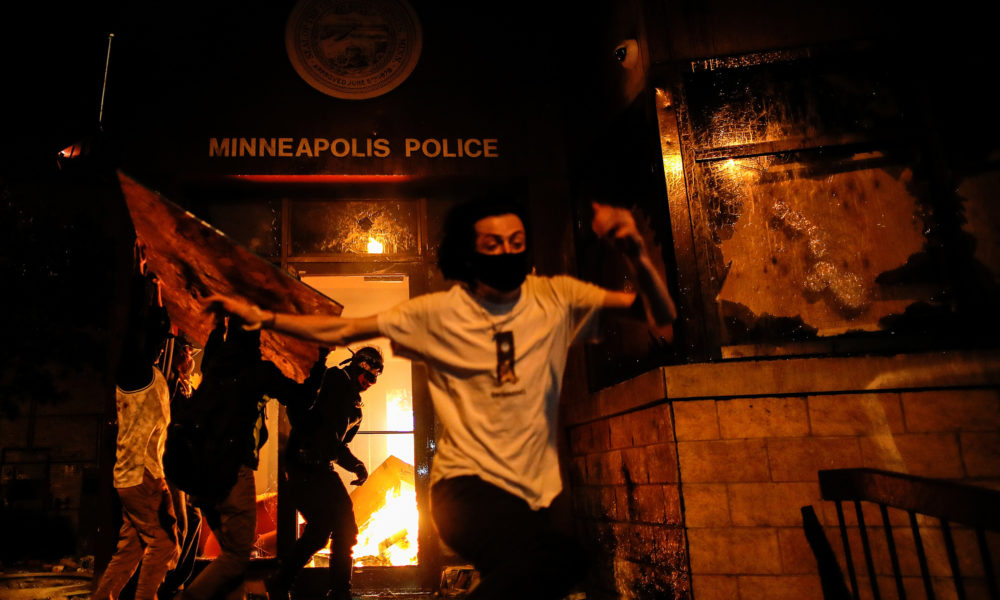 Bourgeois society has a very funny way of talking about violence. In the aftermath of the police murder of George Floyd, as thousands poured into the streets to demonstrate their anger and demand justice, the bourgeois press was publishing articles with headlines like this: “Violence erupts in Minneapolis following black man’s death in police custody.”

What a strange formulation! Not only does the headline conceal how this “death” happened. Apparently it is not “violence” if a state functionary chokes a restrained man to death. No, “violence” only began after that.

This bias underscores the way that bourgeois society operates. A Black man being murdered by the state is just a normal day; but people taking things from a Target store without paying is a catastrophe. People are expendable; but property is sacred.

Indeed, capitalist society treats all kinds of systemic violence as so completely natural that it does not even deserve the term. A police murder in broad daylight might, if there are sufficient protests, be condemned as “excessive force.” But what about when police do follow all rules and regulations? When they evict a family from their home, for example — is that not violence? What about a store preventing hungry people from getting food? What about a government allowing 100,000 people to die of a pandemic? Is that not violence?

The German communist poet Bertolt Brecht put it succinctly: “There are many ways to kill. They can stab a knife in your guts, take away your bread, decide not to cure you from an illness, put you in a miserable house, torture you to death with work, take you to war, etc. Only a few of these are forbidden in our state.”

In response to the protests, bourgeois politicians are speaking out against violence. But of course they do not mean the daily violence committed by the police. They are not referring to the massacres committed by the U.S. military or the economic havoc wreaked by American corporations. No, their main concern, almost inevitably, is property damage.

The U.S. Representative from Minneapolis, the progressive Democrat Ilhan Omar, for example tweeted out on Thursday: “We should and must protest peacefully. But let us end the cycle of violence now.” Atlanta’s Democratic Mayor Keisha Lance Bottoms said: “This is not in the spirit of Martin Luther King Jr.”

But what was the spirit of Martin Luther King Jr.? He was not a socialist, but he understood that oppressed people must stand up to their oppression. For this, he was condemned by the powers that be for his supposed “violence.” On April 12, 1963, a group of eight clergymen called on King to cancel planned demonstrations for civil rights in Alabama. They called demonstrations “unwise and untimely” because they  “incite to hatred and violence, however technically peaceful those actions may be.” They denounced the mobilizations as “extreme measures” and proposed that Black people should “peacefully obey” while relying on courts.

King, of course, did not follow this advice. He defended riots as “the language of the unheard” and went on to denounce the U.S. government’s horrific violence in Vietnam. It was only after his murder that King was transformed into a harmless icon — an angelic figure who supposedly preached nothing but passive resistance

Progressive Democrats like Omar are not calling for peace — they are calling on people to peacefully obey the system that is murdering them. Omar wants the U.S. federal government to investigate police murders. Yet decades of police “reforms” have only shown that this institution cannot be reformed. The Minneapolis Police Department is headed by a Black cop who once sued the department over its racist practices. And yet: the capitalist police, even with the most enlightened leadership, can have no other function than protecting capitalist property. This means oppressing the poorest sectors of the working class, especially Black people.

As socialists, we do condemn violence — we condemn the violence that the capitalist system commits against billions of people every day. We do not condemn it when working-class and poor people begin to defend themselves against the system’s violence.

A riot serves to get the attention of the ruling class. It might even force them to make concessions. But a riot cannot end the system of oppression and exploitation. For that, we need to combine the rage on the streets of Minneapolis with socialist organization. Democratic Party politicians (even the ones that call themselves “socialists”) will always call on people to accept the institutions that oppress them. Real socialists, in contrast, want to build up organizations that are independent of the ruling class, their state, and all their parties.

A tiny minority of capitalists exploits the labor of the huge majority of people. In order to maintain their rule, they maintain an enormous repressive apparatus, including police, jails, armies, judges, etc. — that is their state. The capitalists are driving our entire civilization to a catastrophe. But they will never relinquish power voluntarily. Throughout history, no ruling class has ever given up without being toppled. As Karl Marx wrote, “Violence is the midwife of every old society pregnant with a new one.” This is why the working class needs to confront the capitalists’ bodies of armed men.

When working people set fire to a police station, the capitalists’ media will call this “violence” — but it is nothing more than self-defense against the daily violence perpetrated by capitalism. We must get rid of the capitalists’ state, and replace it with a society run by working people themselves. That is the essence of socialist revolution. And the fires on the streets of Minneapolis show that the deepening crisis of capitalism is pushing U.S. society just a little bit closer to that end.