Socialist and communist parties have often blurred the line between theory and popularization. Marxist theory is not simply sociology — the study of political economy or history — but a guide for revolutionary practice. 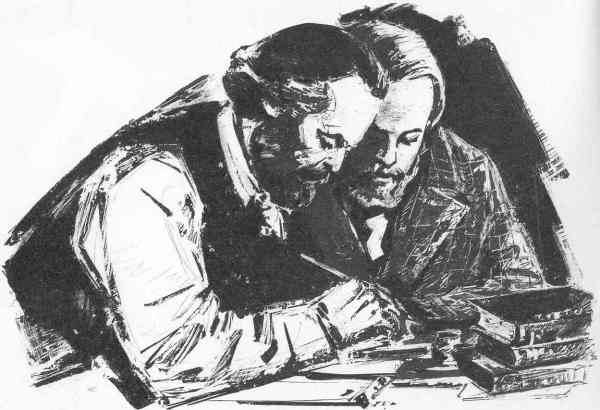 Marxist theory is not the same thing as the popularization of socialist or communist ideas but is (at its best) an open-ended, creative, and continually developing theoretical framework for understanding and changing the world. As Lenin put it, “without revolutionary theory there can be no revolutionary movement.”[1] However, in order for Marxist theory to fulfil its goal, ways must be found to popularize it for millions so they can understand and apply it.

The main task of Marxist theory is to guide revolutionary work at the highest and most sophisticated levels. However, popularization is needed to introduce workers to (and arm them with) the advanced ideas and methodology of Marxism – especially since society systematically miseducates them. Popularization occurs via newspapers, cartoons, symbols, plays, songs, plays, and art, among other media. The most popular books in history on Marxism are not advanced texts such as Das Kapital or the Grundrisse, but popularization such as Terry Eagleton’s Why Marx Was Right, Nikolai Bukharin and Evgeny Preobrazhensky’s ABCs of Communism, and Quotations of Chairman Mao Zedong (with varied results). There is the danger of vulgarization of theory, where critical thinking is not fostered, but Marxism is replaced with dogma, a closed system, and a stale orthodoxy.

For example, in December 1965, in a letter to the Cuban Minister of Education, Armando Hart, Che Guevara deplored the Soviet textbooks used to instruct party cadre for their mechanical approach:

I want to propose a few small ideas about developing the culture of our vanguard and our people in general. In this long vacation period I have had my nose buried in philosophy, something I have wanted to do for some time. I came across the first problem: nothing is published in Cuba, if we exclude the hefty Soviet bricks, which have the drawback of not allowing you to think for yourself, because the party has already done it for you, and you just have to digest it. In terms of methodology, it is as anti-Marxist as can be and, moreover, the books tend to be very bad.[2]

The manuals Che deplored were not introductions to Marxist theory, but a codified orthodoxy, where Marxism is learned by rote and presented as a philosophical master-key to all questions.
The problem of popularization (or vulgarization) as identified by Che extended far beyond stale Soviet Diamat manuals and can now be found in parties built on social democracy, communism, Maoism, and Trotskyism.

Marx himself discouraged this application of Das Kapital by his overzealous Russian followers who believed it was a literal blueprint. He directly stated that he intended his theory to be a critical method, not something

fatally imposed upon all peoples, regardless of the historical circumstances in which they find themselves placed…But I beg his pardon. He does me too much honor and too much shame at the same time….By studying each of these evolutions separately, and then comparing them, one will easily find the key to these phenomena, but one will never succeed with the master-key of a historico-philosophical theory whose supreme virtue consists in being supra-historical.[3]

This type of mechanical thinking nurtures delusions of easy answers and inevitable victory if we follow a simplistic and complete system which seems to be “there for the taking,” replacing the need for constantly developing that theory in practice.

When socialist and communist ideas first take root among masses of people, these ideas are experienced by them not as a critical method but as a faith. Antonio Gramsci observes that at an underdeveloped stage, revolutionary ideas “will initially take on superstitious and primitive forms like those of mythological religion, but will find in itself, and in the intellectual forces that the people will express from deep down within, the elements necessary for overcoming this primitive phase.”[4] Although this acceptance is proof that a new vision has taken root among the working class, this vulgar Marxism can over time descend into

an act of faith in a certain rationality of history and in a primitive and empirical form of impassioned finalism which appears in the role of a substitute for the Predestination or Providence of confessional religions. It should be emphasised, though, that a strong activity of the will is present even here, directly intervening in the “force of circumstance”, but only implicitly, and in a veiled and, as it were, shamefaced manner. Consciousness here, therefore, is contradictory and lacking critical unity, etc.[5]

If Marxist organizations leave their theory at a vulgar level, they fail at the vital task of developing their members’ theoretical level, resulting in a divorce between a leadership equipped with a developed theoretical/intellectual understanding of Marxism and a rank-and-file who only understand the bare outlines of Marxism. Here, theory is left to the “experts.” Militants should not bother themselves with reading long theoretical texts but be content with following orders and selling newspapers. This reproduces and perpetuates the split between mental and manual labor within a socialist organization rather than finding ways to overcome it. Italian Marxist philosopher Antonio Labriola criticized this attitude in the Italian Socialist Party, stating: “The reading of all the writings of the founders of scientific socialism has so far been largely a privilege of the initiated!”[6]

Cadre are not encouraged to read and train themselves in Marxist theory but simply to read approved texts, interpretations, and verdicts. Those members who dare to broaden their horizons are viewed as dangerous and suspicious by the leadership. Only members who show themselves as sufficiently docile and subservient to the leadership are encouraged to develop. This is a breeding ground for a bureaucratic mentality and an authoritarian organization.

In other situations, the leadership shares this same vulgar Marxist theory as its membership, and this leaves the party as a whole incapable of thinking critically or formulating a revolutionary strategy. Instead, it sinks into tired routines and failed strategies, leading to reformism and opportunism – something experienced by many socialist and communist parties both in history and in the present day.

“Revolutionary leaderships” who pursue opportunistic and reformist strategies fear training their cadre in advanced theory, since a membership educated and informed by Marxism would be more likely to support greater democracy and challenge problematic policies. In this case, “theory” is deliberately kept to a low level of ritualistic quotations and simplistic formulations which are divorced from their context and used to justify every craven deal and betrayal of principle. Rosa Luxemburg noted that the German Social Democratic Party’s (SPD) increasing reformist and parliamentary orientation bred illusions in class collaboration, careerism, and a peaceful path towards socialism. Luxemburg noted that for the opportunistic leaders of the party to prevail, they needed to “dissolve the active, class-conscious sector of the proletariat in the amorphous mass of an “electorate.””[7]

For parties like the SPD, the wider working class was seen more and more as just another interest group to which the party should appeal for votes instead of a revolutionary class that must be educated by the party in its historic mission. Marxism was no longer a theory guiding the class struggle but simply window dressing. Militants and workers who believed that Marxism was not the philosophy of opportunism but that of proletarian revolution were denounced as “purists,” “sectarians,” “ultra-leftists,” and “Blanquists.” In the end, the SPD found itself on the other side of the barricades, murdering revolutionary workers. In different ways, the dismal fate of the SPD was shared by other socialist and communist parties that degenerated from revolutionary organizations into election machines.

Ultimately, Marxist theory must be able to incorporate a complex web of analyses and methodologies which are not easily reducible to a simple formulas. Revolutionary theory is not the same as its popularization. Popularization must help the working class to understand more advanced theories so they can apply them in order to consciously change the world. If popularization remains at the level of vulgarization, this is no longer Marxism. but religion and dogma. This degenerated version of Marxism may suffice as a simple faith or as a justification for opportunism, but it will never be a guide for working class emancipation.

Marxism must be a living and critical theory engaged with the common sense and experience of the masses in order to raise them up to a higher level. As Gramsci says: “a philosophy of praxis cannot but present itself at the outset in a polemical and critical guise, as superseding the existing mode of thinking and existing concrete thought (the existing cultural world).”[8] Marxists need to investigate the conditions, feelings, language and whole way of life of the working class. Only by learning from the concrete experience of the workers is it possible to educate them. However, it is not enough to meet workers where they are at since stagnating at this level can lead to the danger of the party adapting its policies to backward ideas instead of raising consciousness. It is imperative to popularize Marxism among the working class and nurture a whole new corps of militant revolutionary leaders capable of leading the class struggle. The process of popularizing Marxism among workers must arm them with advanced ideas and broaden their outlook and knowledge so they can emancipate themselves.

Doug Enaa Greene is an independent historian living in the greater Boston area and the author of the forthcoming book, Specters of Communism: Blanqui and Marx.