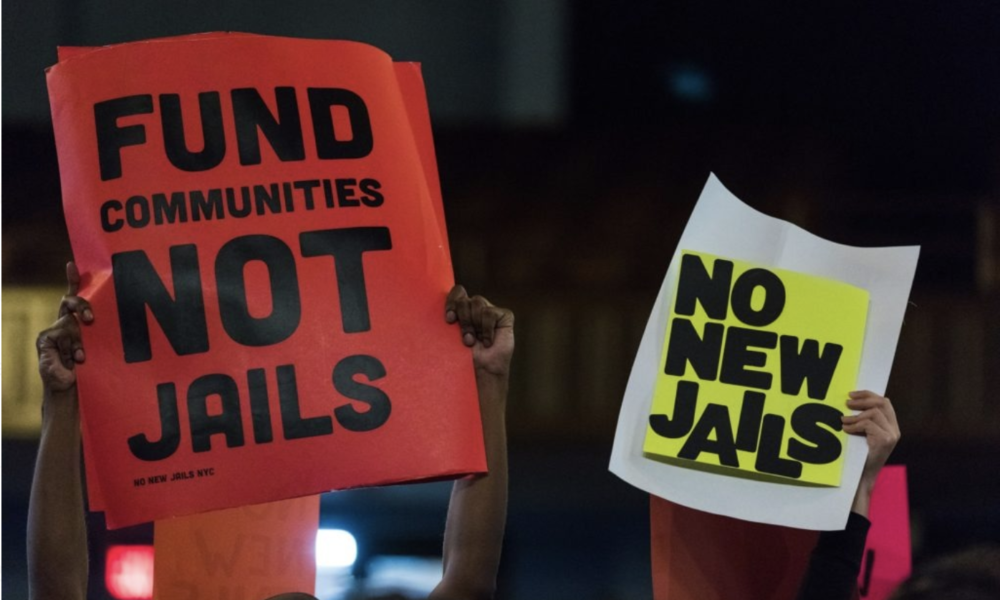 The New York City Council met today to vote on Mayor Bill de Blasio’s proposal to spend $11 billion to build four new city jails—one in each borough. De Blasio and his allies are presenting this expansion as a necessary step to fulfill the community demand to close Rikers Island. The theory behind this claim is that if NYC were to build these ‘neighborhood jails’ in every borough except Staten Island then, eventually, Rikers could be phased out over the next ten years. De Blasio also claims that these ‘community’ jails will lead to an overall decrease in the prison population of New York.

There are numerous problems with this theory, but the largest problem is that it doesn’t address the key problem with Rikers: that it is a prison. The demand to close Rikers Island wasn’t just about the brutal conditions in that particular prison. It was a demand against the racist prison industrial complex. The issue isn’t just that this or that prison has this or that problem, the issue is the criminal justice system. The carceral state is a racist, sexist, transphobic, and abusive institution and no amount of reform can change that. Rikers isn’t the root of the problem and, certainly, four new jails isn’t the solution. What de Blasio is proposing isn’t anything other than yet another expansion of the carceral state, this time disguised as prison reform.

One of the most galling elements of de Blasio’s plan is the framing of the expansion as building “neighborhood” or “community” jails.  One activist summed up the problems with this framing best, saying “There is no such thing as community jails. We live in a city with well over 60,000 homeless people and thousands more living in someone else’s home. There are more vital needs that aren’t being addressed in New York City than investing in properties that will hold people instead of helping people.” Prisons are not part of communities but, rather, methods to destroy communities of color.

Prisons are used specifically to oppress communities of color with black inmates counting for 37% of the total prison population in 2014. This is a targeted tool of oppression, an attempt to carry the legacy of slavery and Jim Crow into the modern era. Black people are often subject to harsher sentences and worse conditions than white people accused of the same crimes. In New York City these racial disparities are heightened with Black people counting for 53% of the prison population of the city while white people only count for 26%. Those pushing this new “community prison” plan forward are merely opening four more white supremecist institutions.

Capitalism relies on various control devices to disempower the working class. One of the key control devices in the capitalist strategy is prisons. Prisons are able to ‘disappear’ social problems and people who the state doesn’t know what to do with. Then, once they are in prison, the state and its business partners are able to further exploit their labor.  This is a process that is central to modern American capitalism. That is why one of the main slogans from activists who oppose de Blasio’s plan is “if they build them, they will fill them.” Because the ruling class doesn’t want to eliminate prisons or decrease the prison population. The system of prisons isn’t broken, it’s working exactly as those with power want it to work.  The state uses prisons as a means of controlling, containing, and profiting from what they deem surplus populations.

Prison abolition is becoming an increasingly popular position with even some liberals beginning to take stands against the mass incarceration crisis in this country. However, some are trying to co-opt this movement by framing prison ‘reform’ as a demand that can be realized in a capitalist society. This can be seen by the shift of the conversations to focus on “ending private prisons” and “decreasing the prison population.” While private prisons should end and prison populations should be decreased, neither reform addresses the true nature of the problem: that capitalism requires prisons as a means of controlling the working class and the poor. As such, it is impossible to have a world without prisons without ending capitalism.

The City Council voted in favor of de Blasio’s plan today and, while that is a blow to those who have been fighting so fiercely against the expansion, it is important to remember that the fight doesn’t end here. The coalitions and activism built by the organization No New Jails points to the potential to build a stronger movement. A letter signed by 250 New York City social workers against DeBlasio’s plan points to sectors of the working class that can be mobilized against prisons.

It is possible to build a world without prisons, without a racist legal system that destroys communities, and without the capitalist abuses that are inherent in the system. It is our task to fight for it. We can create a world without capitalism.