They Are Leaving the Working Class to Die: Record 3,054 Covid Deaths in a Single Day

Over 3,000 people died yesterday from the coronavirus. The government, which has sent the working class to die for capitalist profits, is responsible. 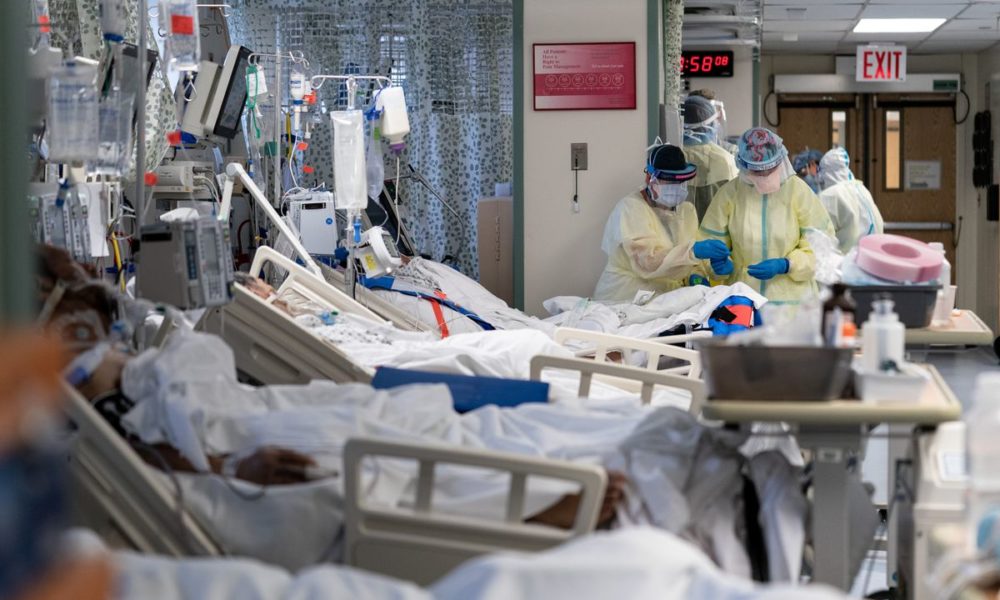 Yesterday, 3,054 people in the U.S. died of Covid-19, the highest one-day death toll in the United States. This breaks last week’s record of 2,885 deaths reported in a single day. The peak before that was 2,752 deaths on April 15. The U.S. will soon surpass 300,000 deaths on the national level due to the coronavirus. Currently, 288,000 deaths have been recorded, according to a New York Times database. In over nine states, one out of 1,000 people have died at the hands of the virus.

States reported 1.8 million tests and 210,000 cases, which is a 10 percent increase in cases over the last week.

There are a record 106,688 patients in hospitals, and around the country hospitals are over-run, operating at or above capacity. One in three people are living in an area that is running critically low of ICU beds. One in ten live in places where intensive care beds are either at capacity within 5 percent of being packed. In El Paso, only 13 of the 400 intensive care beds were empty last week.

In Albuquerque, New Mexico there were zero. None. 0.

Black and Latinx people continue to be disproportionately affected and die at significantly higher rates.

In the meantime, Congress refuses to pass coronavirus aid measures for the working class and to do what we all know is necessary to stop the pandemic: pay people to stay home and only keep truly essential industries open. Only young and healthy people should be working in those limited essential sectors— everyone else should be paid a living wage to stay home.

There should be extensive and accessible testing and tracing— not 18 day waits for results, as there were in July, or 6 hour long lines for tests as there are today.

We know how to stop the pandemic but the capitalists won’t do it because it largely diminishes their profits. Instead of putting lives over profits, we have 3,000 deaths a day to keep the economy open and functioning. Gyms, indoor dining, schools— around the country, overwhelmingly, everything is open. Bosses in meat-packing industries are betting on how many workers will get COVID, while at the same time Republicans and some Democrats in Congress want to pass liability protections for bosses alongside COVID protections.

There has been a huge push by the media and politicians to place the responsibility for the pandemic on individuals for having small gatherings and “not taking the pandemic seriously.” It is important to wear a mask, socially distance, get tested and follow CDC guidelines. But individual choices are not enough.

As I argued in an article before Thanksgiving:

As the virus continues to rage out of control, the government’s inaction has been nothing short of criminally negligent. The Trump administration, naturally, has never even considered issuing a nationwide stay-at-home order. But president-elect Joe Biden has already made it clear that he won’t do so either.  Gyms, restaurants, and many school districts continue to run business as usual despite the surge. People are still getting on packed buses and trains every morning and evening to get to and from work. In the nation’s hideously overstuffed prison system, which is essentially a massive network of superspreader sites, inmates are twice as likely as the general population to die from COVID, and politicians seem quite content to leave them to this fate — unless, of course, there is an opportunity to exploit inmates as slave labor for fighting fires or handling corpses.

Meanwhile, Donald Trump and other ultra right-wing Republicans have attempted to stoke a culture war around the most basic way to protect ourselves from the pandemic — wearing a mask. But in the end, Republicans were more up front about the policy being pushed by Democrats and Republicans alike: it’s okay if workers die as long as the capitalists keep their profits.

And some capitalists have been making record profits during the pandemic.

The pandemic isn’t continuing to spread at this rate because of individuals who aren’t behaving responsibly– although certainly, individual responsibility is important. It’s spreading because the economy is entirely open and the government refuses to pay workers to stay home. As I argued previously,

We have to be clear. Black and Brown people are dying from COVID at disproportionate rates. And the leading cause is not because they are personally irresponsible. It’s not because they didn’t wear a mask— and it’s likely not because of small gatherings either. It’s because people of color are disproportionately represented among essential workers who are not paid to work from home and are instead used as sacrificial lambs at the altar of capital. It’s also because communities of color suffer from environmental racism, which lead to a whole series of ailments including asthma.

Since March, the working class has been given meager funds to sustain themselves during this crisis, in sharp contrast to the trillions given to Wall Street and large industries. Food bank lines continue to grow, so that in a time of feasting many instead face hunger. The economy remains open because the capitalist government wants it to remain open.

It seems that we are on the verge of a COVID-vaccine being approved and rushed to the general public. This seems to be the bipartisan plan for the capitalist class and their government: keep the economy open, let people die, and hope that within a few months most people get the vaccine and we can all get back to normal. And this is a catastrophic plan that allows for thousands of deaths. 3,000 a day may just be the beginning.

But it doesn’t have to be this way. The working class is already showing examples of fighting back, such as the Albany nurses and Chicago nursing home workers going on strike. We need to follow these examples and fight— fight for hazard pay, for more healthcare workers, for workplace protections, and shutting down the non-essential areas of the economy with extensive aid to the working class.