They are repressing the Twelfth Global Day for Ayotzinapa

On May 26, big mobilizations were carried out in the Distrito Federal and several other cities of the interior, like Morelos, Cuernavaca, Acapulco, San Cristobal de las Casas, bringing together thousands of people in the framework of the twelfth Global Day of protest for Ayotzinapa. 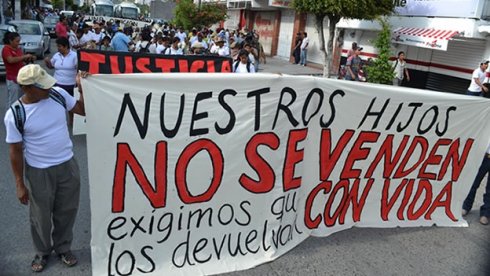 The main action in Mexico City was severely repressed by an operation of 2,500 police, sent by the government of the Party of the Democratic Revolution (PRD), that calls itself “democratic.” At press time for this edition, the comrade José Antonio Arce Avendaño continued to be under arrest.

The central demand of the day was the appearance alive of the 43 and punishment of those responsible, and it was promoted by the relatives of the disappeared student teachers, who also carried out a “South American Caravan,” to disseminate the situation and prevent the right-wing PRI government from managing to close the case. Social and trade-union organizations, like the electrical workers and teachers, and student organizations, supported the mobilizations throughout the country.

The elections of this coming June 7, were also condemned on the Day, because they want them to be carried out, as if Ayotzinapa “had not existed,” and many confirmed the policy of “boycotting” the elections in Guerrero. Immediately following is the May 27 political declaration of the MTS.
Stop the repression! Freedom for the political prisoners! Facing the repression against the 12th Global Day for Ayotzinapa

Today it is 8 months since the State and its repressive forces caused our 43 student teacher comrades to disappear in Iguala, where the PRD governs. Despite the great national and international outrage that this caused, bringing out thousands to protest in the streets, the government of the Federal District, in accord with the authoritarian policy of the federal government and with Peña Nieto – brutally repressed today’s mobilization that was demanding the presentation alive of their relatives and comrades, and it arrested 3 people, whose whereabouts are currently unknown.

This police action shows the lives of the murdered and disappeared comrades do not matter to this murderous and anti-democratic democracy, that is willing to silence the protests and that seeks to avoid, at all costs, any questioning of the electoral trap aimed at legitimizing the “democracy of the political disappearances and murders”; that of militarization and of corruption at all levels, and that which hands over natural resources to the big transnational corporations.

In the Congress of the Union, the bosses’ parties are getting ready to distribute power through the June election, and to reinforce this, the authoritarian regime seeks to weaken the demand for the appearance of our comrades and the mobilization, through repression and the attempt at co-opting the relatives of the student teachers.

It is the democracy of the tear gases, the cudgels, and jail for all the groups that go out to struggle and that question the plans and reforms implemented by the government.

From the Socialist Workers Movement, we repudiate the repression of the Global Day, that is demanding the presentation alive of our 43 disappeared student teachers. We demand the immediate and unconditional release of the political prisoners from the Global Day, and we call on trade-union and human rights organizations to promote a National Coordinating Committee against Repression, in a context wherein the Mexican regime murders, causes to disappear, and carries out massacres like that of Tlatlaya, Iguala, Apatzingán and Tanhuato. This cannot continue in this way.

Faced with this reprehensible repression of the mobilization, from the the Socialist Workers Movement, we endorse our call, in these elections, to promote the invalid ballot, due to which, actions like those of today show that none of the existing parties is an alternative, nor do they seek to resolve the most heartfelt demands of the poor and working people.

We need to build an independent political instrument, belonging to the workers, that will fight for the demands of the exploited and oppressed, and will end this democracy of the rich.

They were taken away alive,
We want them returned alive!
Punishment for those responsible!