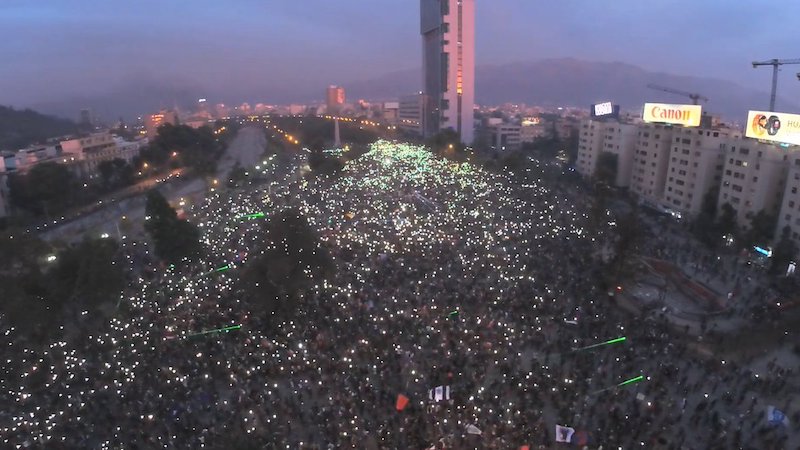 The government’s “social agenda” has failed to alleviate the open conflict in Chile. So Piñera has decided to ramp up the repression. This week he announced a series of new security measures to criminalize the protests, including new anti-mask and anti-barricade laws, more funding to the police, and the modernization of intelligence forces. These are direct attacks on the youth, women, indigineous peoples, and the working class.

However, the continuation of the rebellion for the third Friday in a row has revealed a widespread rejection of the government’s proposals, leading to a mass mobilization in the streets and clashes with the police.

The continuing demonstrations show that there is still a strong desire to defeat the government, despite the enormous repression which has left more than 20 dead and hundreds injured. This is also despite the ongoing attempts by the center-left parties of the former Concertación coalition to channel the movement toward negotiations with Piñera. These parties, while currently in opposition to the right-wing government, have spent decades managing the regime inherited from the dictatorship. Rather than leading the rebellion forward, these parties have sought to end the crisis by negotiating about some minor concessions to the mass movement.

For a Plan of Struggle to Topple the Government!

This Tuesday (November 12), a general strike has been called by the Social Unity Roundtable, which is composed of the the trade union federation CUT, the teachers’ and dockworkers’ unions, as well as social movements and students’ organizations. These organisations are dominated by the Communist Party and the Frente Amplio (Broad Front).

The call for a general strike is absolutely necessary and we must push it forward with all our strength. However, the Social Unity Roundtable does not raise the main demand echoing through the streets: “Out with Piñera!” By allowing this government to survive, they are helping to stabilize the regime inherited from the dictatorship which the whole world can see shaking. Instead of the united working class striking in unison, they are being led on by endless negotiations with a criminal government that uses democracy as a smokescreen while it murders its own people.

But the policy of the Frente Amplio and the CP has focused on finding an institutional solution to the crisis, with a plebiscite on a constituent assembly. This is despite the fact that the only guarantee that a constituent assembly could take place is by continuing the rebellion on the streets. It is quite naive to believe that a non-binding plebiscite could convince a government that has been completely deaf to the demands made by millions of people mobilized throughout the country.

This policy, which tries to appear combative but actually seeks solutions within the capitalist institutions, has already begun to generate friction and disagreements. Recently, the Coordinating Assembly of Secondary Students (ACES), decided to leave the Social Unity Roundtable because they “do not want to legitimize this government” particular after the 2011 student movement for free education was also diverted into the dead-end of parliament.

We need an active general strike and a plan of struggle that prepares us to overcome the intransigence of the government. We must organize ourselves from the grassroots in order to achieve it, as the health workers of the Barros Luco hospital have been doing, together with the Cordón Centro that gathers and coordinates workers, artists, and students. On Saturday, they held an open assembly to fight for these demands.

The genuine desire of broad sectors of the population to get organized has generated various forms of self-organization, ranging from assemblies, coordinating and emergency committees and even first aid brigades. These spaces have a realistic understanding of the contradictions of the moment: the government does not want to deliver any structural change, every demand that was raised in the street will only be won through struggle, and for this strike to be successful production itself must be paralyzed.

The general strike must also demand the trial and punishment for the murderers of protesters, freedom for those imprisoned, and the right to demonstrate. But this will only be possible if we prepare a plan of struggle that seeks to extend and deepen the general strike through grassroots assemblies and coordinating committees. It is only then that will be able to implement the demand raised on the streets on Friday: “Pinera must fall!”

In this wayand in combination with the enormous strength of the mobilized workers—that we can forge the unity and strength to defeat not just Piñera, but the entire legacy of the dictatorship. We can do this by pushing past the conservatism of the bureaucratic leaders who have always sought to accept crumbs and minor reforms in order to keep the system intact. As they say in the streets, there is the possibility that Chile will be both the birthplace and grave of neoliberalism.