“This is Not a Country, This is a Mass Grave With a National Anthem”: Anti-Police Protests Rock Colombia

Colombia has seen massive anti-police protests in several cities in recent days after the cops in Bogotá killed a father of two. The uprising continues the growing opposition to the neoliberal onslaught against the working class and poor people, but is also part of the global protests in the aftermath of the murder of George Floyd. 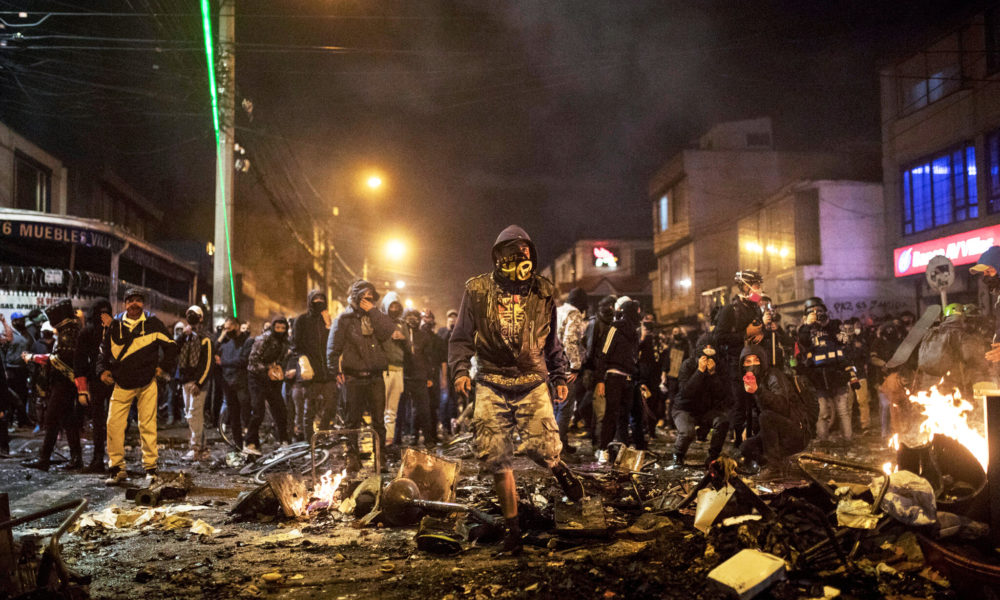 His name was Javier Humberto Ordóñez — the father of two young boys, ages 11 and 15, and one exam away from a law degree.

During the early morning hours of Wednesday, September 9, 46-year-old Ordóñez and his friends were drinking at an apartment in Bogotá, the capital city. Venturing out to get more alcohol, the men were confronted by police enforcing bans on public drinking and purchasing alcohol after 9 p.m during the pandemic. The ensuing altercation, captured on video, shows the police repeatedly submitting Ordóñez to shocks from a stun gun as he pleaded, “Please, no more, I’m suffocating.” Ordóñez was taken into police custody and died at a hospital several hours later.

“No one deserves to die this way,” said Eliana Garzón, his sister-in-law.

Within hours, massive protests erupted in several Colombian cities, including Medellín, Pereida, and Ibague — anti-police uprisings like those that have gripped the United States and much of the world this summer. The next afternoon, protesters in the Engativa neighborhood of west Bogotá destroyed the police precinct of the officers responsible for Ordóñez’s death. By early Thursday morning, dozens of police stations had been set on fire or vandalized. Some burnt police precincts have been repurposed into places for communities to gather, with makeshift libraries (like the “Biblioteca Popular” in Soledad), DJs spinning records, and communal discussions.

Some see the protests — which have resulted in at least 13 deaths — as a continuation of anti-government protests spurred in late 2019 by trade unions frustrated with the policies of President Ivan Duque’s right-wing government. Then, protesters accused accused the government of failing to protect indigenous leaders and social activists from violence, cutting funds from public education, and being nonchalant in implementing certain aspects of the 2016 Peace Agreement with the Revolutionary Armed Forces of Colombia (FARC), a left-wing guerrilla group that waged a half-century-long war against the government. Colombia’s Covid-19 lockdown and its devastating impact on an economy that relies heavily on tourism have only worsened tensions, which clearly spilled over in spectacular fashion last week.

Young Colombians are also tired of the coordinated violence reminiscent of the worst years of the Civil War, when guerilla groups, paramilitaries, and cartels would duke it out for territory, trafficking routes, and crops. Just this year, nearly 100 human rights advocates have been murdered, on top of the murder of 41 former FARC guerillas — despite their “official” amnesty spelled out in the peace agreement. In a particularly harrowing August incident in Samaniego, eight young people were killed at a party when four gunmen stormed a house and began shooting. The massacre had all the makings score settling among rival gangs — something parents of the victims deny. Incidents like these have galvanized protesters to march with powerful signs, such as one in Bogotá that read: “Esto no es un país, es una fosa común con un himno nacional” (“This is not a country, it is a mass grave with a national anthem”).

While the protests of 2019 were unprecedented for a country long mired in political violence, the social explosion of the last few days has the potential of bring left-wing politics forward in a way the country hasn’t seen since the 1960s, when groups such as FARC and the National Liberation Army (ELN) emerged in the aftermath of the Cuban Revolution. According to Sergio Guzman, a political analyst who heads the Colombia Risk Analysis group, these protests are the “start of a much bigger period of political unrest” that may disrupt plans to reopen the Colombian economy.

Colombia’s Defense Minister, Carlos Holmes Trujillo, made a weak — if not insulting — statement on Ordóñez’s death aimed at quelling the rightful rage of protesters: “I apologize on behalf of the national police for any violations of the law … by any member of the force.” He made no mention of the police terror protesters have faced on the streets (as of Thursday, 66 people had bullet injuries) and no concrete commitment to reforming Colombia’s police force, which functions under the auspices of the Ministry of Defense. According to Bogotá mayor Claudia Lopez, the police were not authorized to fire at the protesters, which raises the question: What is the logic of attacking protesters, already angered to the core by decades of violence on behalf of state actors, with more violence?

There should be no surprise at the revolutionary fervor on Colombia’s streets. It is part of a worldwide proletarian narrative being written in real time. Breathing has become an apt motif for the year 2020, from George Floyd begging for his life with the words “I can’t breathe,” to Ordóñez pleading “please … I’m suffocating,” to the Covid-19 pandemic that has killed upwards of a million people and shows no signs of dissipating, and to the massive climate fires burning on the U.S. West Coast. Neoliberal capitalism has been constraining the masses from breathing for decades. The pandemic-fueled global economic downturn has made this glaringly obvious, with inequality along racial and class lines reaching untenable heights. The masses are reacting with a militancy unseen since the 1960s, and they show no signs of abating.

From Bogotá to Brooklyn, and from Medellín to Minneapolis, mere reform as an option is being relegated to the burning dustbin of history. The people of Colombia have long been forced into a violently enforced slumber, but now they shout, “¡Ni un paso atrás!” (“Not a single step backwards!”)