This Is Not What Socialist Internationalism Looks Like: DSA and Dilma Rousseff

One of the keynote speakers for the DSA convention was former Brazilian President Dilma Rousseff. This is not what internationalism looks like. 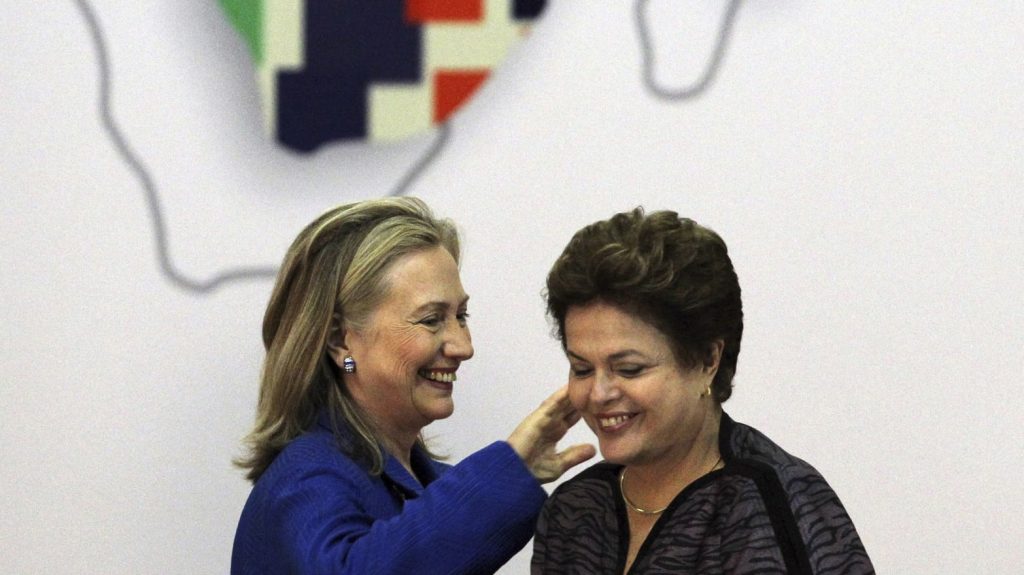 One of the keynote speakers at the convention of the Democratic Socialists of America (DSA) that just concluded was none other than former Brazilian president Dilma Rousseff (known in Brazil just as “Dilma”). I lived in Brazil for much of her presidency — my family is Brazilian — and I want to say a bit about why this was an bad choice of speakers, one that signifies a significant turn to the right for the DSA. To give a platform to Dilma means turning your back on the Brazilian working class and siding with the capitalist state. This is true even with Bolsonaro in power and even though Dilma was ousted by an institutional coup.

Far from combating the rising far right and Bolsonaro, Dilma and the Workers’ Party (PT) instead facilitated its rise and worked with them, including to implement austerity. Real internationalism means siding with the working class and oppressed around the world, against both imperialism and national capitalists. It means building a socialist political alternative.

Dilma’s was the right wing of the so-called “Pink Tide” governments of the Latin America, and hers most signified a neoliberal and deep austerity turn. She was in office as Brazil faced an economic downturn, with plummeting commodity prices. Dilma made the working class pay — just as any good capitalist would do in an economic crisis. She cut unemployment benefits and funds for healthcare and education, provoking a wave of student strikes and occupations, as well as teachers’ strikes.

Subcontracting expanded exponentially under her administration, resulting in workers having super, super precarious jobs with meager wages. Sometimes, workers weren’t paid at all. At the State University of Rio de Janeiro, it meant the janitors were paid once every few months. In Rio, my comrades and I were involved in student actions to support these subcontracted workers, and even to organize a university student strike for them to get paid.

Dilma opened up Petrobras, Brazil’s partially nationalized oil company, to privatization. In 2014, Petrobras workers went on strike against the auctioning off of “pre-salt” oil, only to be repressed by federal police. In 2015, she essentially went on a “sales tour” to the United States, iseek imperialist investment in this valuable Brazilian resource. She met with the infamous war criminal Henry Kissinger, who she called a “fantastic person.”

Dilma refused to legalize abortion and, in fact, wrote a letter to Christian communities assuring them that Brazil would not do so while she was in office. In other words, she condemned people to die as a result of unsafe, illegal abortions. More than 1 million people undergo illegal abortions every year in Brazil.

She spent millions to build new stadiums for wealthy foreigners to enjoy the World Cup and, later, the Olympics.

In 2013, Brazil saw massive protests against an increase in public transit fares. There was money for new stadiums, but not for public transport? Millions of people took to the streets to protest Dilma’s austerity measures. Throughout the next year, similar protests took place against the World Cup; they were brutally repressed by the military police. After allowing some marching, the police would tear gas everyone. Some folks lost their eyes when hit by rubber bullets. Dilma used anti- terrorist laws to repress the movement and imprison protesters. These same anti-terrorist laws are being used today by the far right to go after protesters.

Carolina CaCau, a socialist from Brazil explains what the Olympics mean to working class Brazilians:

To the working class, the Olympics represent billions wasted and stolen; it means billions of reais spent on public projects that won’t improve the lives of the Brazilian people at all. They only exist to make sure the Olympics happen smoothly and they will have no use after the Olympics are over. They are public works with inflated prices so that the construction companies can get rich via government contracts, as well as by corruption. Bus lines have been cut, making it harder for Brazilians to move around the city. They built a new subway line, but for now, only those involved in the Olympics are able to use it while the rest of the population continues to ride in overcrowded buses, metros and trains. It means building luxury suites in public hospitals for the “Olympic family” while the rest of the Brazilian people literally die while waiting in line to be seen by a doctor in public hospitals.

The Olympics don’t bring anything good for the majority of the population. Furthermore, workers and poor Brazilians won’t be at any Olympics events. Tickets to the events are prohibitively expensive for working people. Workers should have access to sports and culture, but the Olympics are not a way to democratize sports at all.

In fact, throughout her presidency, as she was imposing austerity against the working class, Dilma increased the police budget. She helped create a new police force, the Forca de Seguranca Nacional, which is called upon to repress strikes and mass protests, including workers’ strikes in 2011, the mass protests in 2013, the World Cup protests, and more.

Dilma was ousted in a right-wing institutional coup, which all leftists should oppose. It was undertaken by the right wing — an alliance of big capital, big landlords, and the religious right — in order to impose further austerity on the working class. But we need to be clear: the person who actually orchestrated the coup was the center-right-wing vice president Dilma chose. She put him there.

The coup was supported by mobilizations of the white upper middle class, with very few working class people participating. Nevertheless, Dilma’s ouster came when her popularity was at a significant low point, even among the working class, because of the austerity measures. Some sectors of the working class celebrated, and some later even ended up supporting Bolsonaro later. I was in Brazil for the right-wing coup. In the favela next to my house, there were fireworks when she was ousted — a politically incorrect reaction to the reality of the austerity she implemented that worsened the lives of working-class people and lost her their support.

Now that Bolsonaro is in power, Dilma’s Workers’ Party is not an effective resistance to the rise of the right. In fact, Dilma and the PT opened the doors for the far right at every step of the way. In fact, all of the actors that implemented the coup were strengthened during the years of the Workers’ Party in office, from Lula to Dilma. This means strengthening an unaccountable and unelected judiciary branch that implemented the coup, material benefits to agribusiness, increasing federal subsidies to the agribusiness that instituted the coup and is destroying the Amazon.

Today, the PT is actually supporting many of the same kinds of austerity measures, implemented by Bolsonaro.

Inviting Dilma Rousseff to speak, though, is in line with the DSA’s general orientation internationally. Not long ago, the DSA’s international committee visited Maduro in Venezuela, despite his repression of working class people.

Real leftists side with the working class and oppressed people everywhere. We oppose the capitalist state and those who implement austerity and repression. And we fight the world over for a political alternative to abolish this violent capitalist system. That means opposing Dilma with socialist politics, not inviting her to speak.