The people of Chile, Colombia, and Bolivia are taking to the streets to protest austerity, state violence, and right-wing coups. Indigenous communities are at the forefront of these struggles. This Thanksgiving, let’s honor the resistance and strength of indigenous people in the U.S. and around the world who continue to fight against centuries of colonial discrimination, exploitation, and violence. 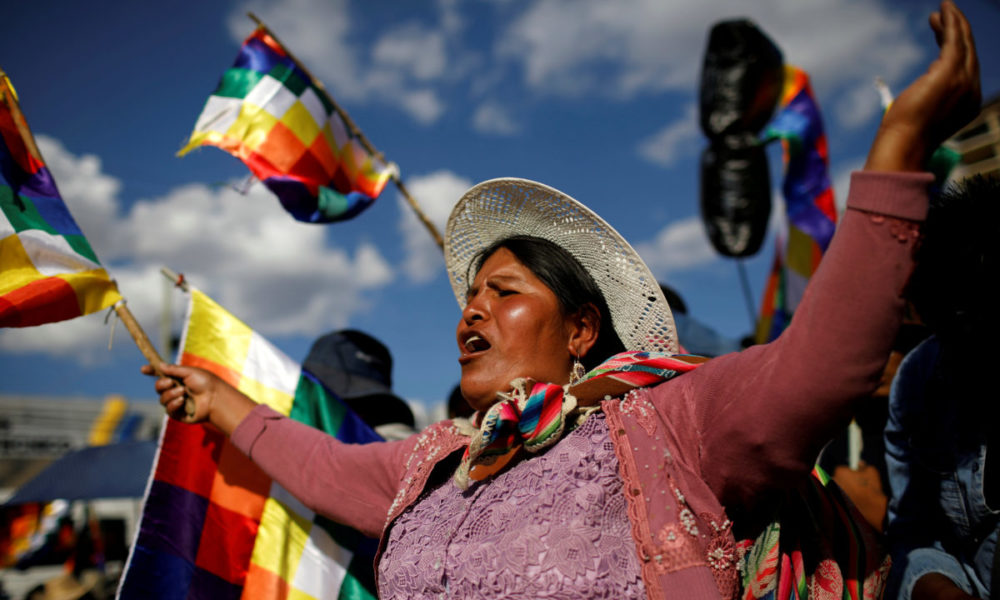 The myth of Thanksgiving, the story we learned as children about the Pilgrims, the Mayflower, and a feeling of friendship and kindness between indigenous and European peoples has very little truth behind it. This story of respect and mutual aid has been used to cover up the brutal genocide of native people by European colonizers.

Even the name “Thanksgiving” has become strongly associated with colonial genocide. University of Texas journalism professor Robert Jensen explains that in 1637, the governor of the Massachusetts Bay Colony, John Winthrop, “proclaim[ed] a thanksgiving for the successful massacre of hundreds of Pequot Indian men, women and children.” The result of this period of European colonization in North America was a genocide of between 95 and 99 percent of American Indians.

The same genocidal legacy was repeated across the Americas, with the mass murder of indigenous people by colonizers from Spain, England, Portugal, and other European countries.

The Mapuche people are an indigenous group in what is now Chile and Argentina. In both countries, they have been systematically discriminated against and have been subject to incredible violence at the hands of the state. Their lands have been seized by the state and by corporations in the most brutal and violent ways—with indigenous people being shot by the police, like Camilo Catrillanca, who was only 24 years old.

But the uprising exploding across Chile for the past month has put the Mapuche at the forefront of the struggle. At protests, Mapuche flags often outnumber Chilean ones, demonstrating the movement’s solidarity with indigenous struggle.

Throughout Chile, protesters have been tearing down statues of colonizers that memorialize the violence perpetrated against indigenous groups for centuries. In one case, a colonizer’s statue was beheaded and his head was put in the hands of a statue of a Mapuche leader. 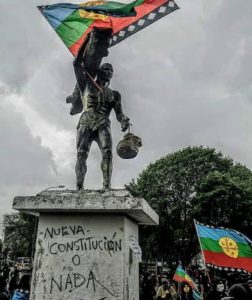 This solidarity with indigenous communities is central to the uprising currently underway in Chile. One of the demands of the movement is the creation of a Constituent Assembly to rewrite the constitution. The demands of indigenous people must be taken up, including but not limited to the protection of indigenous land from the incursions of corporations.

A few weeks ago, there was a right-wing coup in Bolivia, which was particularly notable for its anti-indigenous character. The police force cut the indigenous flag off their uniforms and right-wing protesters burned the wiphala, the flag used by indigenous groups in the Andes. This anti-indigenous coup is supported by imperialist interests—the OAS played a role in sanctioning it and Donald Trump quickly supported the right-wing opposition against Evo Morales.

Confronted with these attacks, the indigenous people in Bolivia have been putting up a heroic struggle against the coup. They took to the streets, waving the wiphala and chanting “now is time for civil war.” They blocked key highways and built barricades; they built assemblies to organize the struggle and self-defense committees to fight against the repression of the armed forces.

This repression has been brutal. The police and military are using live ammunition. They even used tear gas against a funeral procession. Still, the indigenous working class of Bolivia is fighting because they know what is at stake. As one indigenous woman said, “They have always killed us in the name of the Bible. The Spanish showed up with their Bible and their sword. Now they want to kill us again, and we won’t allow it.”

Colombia is the latest country to join the massive wave of uprisings sweeping Latin America. For the last two weeks, there have been general strikes across the country including many different industries; however, these strikes were not only called for by the labor unions. The general strike includes broad swaths of the population and addresses a wide range of issue, from austerity measures to human rights abuses to public education. It is a mass protest that organizes and expresses the general discontent of Colombians. Indigenous groups and demands are playing a central role in the strikes. They are speaking out against the murders of indigenous people and, more recently, the massacre of at least 8 minors in an army bombing in Caquetá.

Since Ivan Duque became President in August 2018, 135 indigenous people have been killed.  Duque may have closed the borders and militarized the country, but people are in the streets all over Colombia—many wave the wiphala and denounce the right-wing coup in Bolivia as well.

Though the government is attempting to mount a campaign against “looters” after last week’s general strike, circulating videos of people destroying businesses, the people are not buying it. Despite the government’s denunciation of the protests, there have been massive cacerolazos—the banging of pots and pans—in solidarity with the general strike and mobilizations. Furthermore, in the aftermath of last week’s  general strike, 18-year-old Dilan Cruz was killed by the Colombian police force, becoming a symbol of the movement and police repression. The people in the streets know that it is not the protesters, but the state that is violent. This week there was another general strike, and the movement shows no signs of slowing down.

For the 50th year, indigenous people in the United States are organizing a national day of mourning on Thanksgiving, gathering at Cole’s Hill, which overlooks Plymouth Rock. A plaque there reads, “Thanksgiving Day is a reminder of the genocide of millions of their people, the theft of their lands, and the relentless assault on their cultures. Participants in the National Day of Mourning honor Native ancestors and the struggles of Native peoples to survive today.” Even erecting this plaque required a significant struggle by indigenous people, a struggle to tell the truth about the colonial legacy of the United States.

As part of this National Day of Mourning, people gather at Cole’s Hill every year and march through Plymouth. This year, the march is “dedicated to Missing & Murdered Indigenous Women, Girls & Two Spirits, and to our thousands of relatives who are migrants and are being abused by ICE and other government agencies, including having their children stolen from them.”

On the occasion of the first National Day of Mourning in 1970, Wamsutta Frank James, the leader of the Aquinnah Wampanoag tribe wrote:

This is a time of celebration for you—celebrating an anniversary of a beginning for the white man in America. A time of looking back, of reflection. It is with a heavy heart that I look back upon what happened to my People. Even before the Pilgrims landed it was common practice for explorers to capture Indians, take them to Europe and sell them as slaves for 220 shillings apiece. The Pilgrims had hardly explored the shores of Cape Cod for four days before they had robbed the graves of my ancestors and stolen their corn and beans…We, the Wampanoag, welcomed you, the white man, with open arms, little knowing that it was the beginning of the end; that before 50 years were to pass, the Wampanoag would no longer be a free people.

On this Thanksgiving, let’s give thanks for and show solidarity with indigenous resistance movements both in the United States and across the world, for those people who are fighting at this very moment against the violence of centuries of colonial and imperialist domination.