Last weekend, nearly 6,000 activists from all over Europe came to block the coal mining infrastructure of RWE, the largest power company in Germany. It was a display of mass civil disobedience calling for “climate justice” and an immediate end to coal power. We must get rid of coal before 2030 if we want to avoid continued global warming. 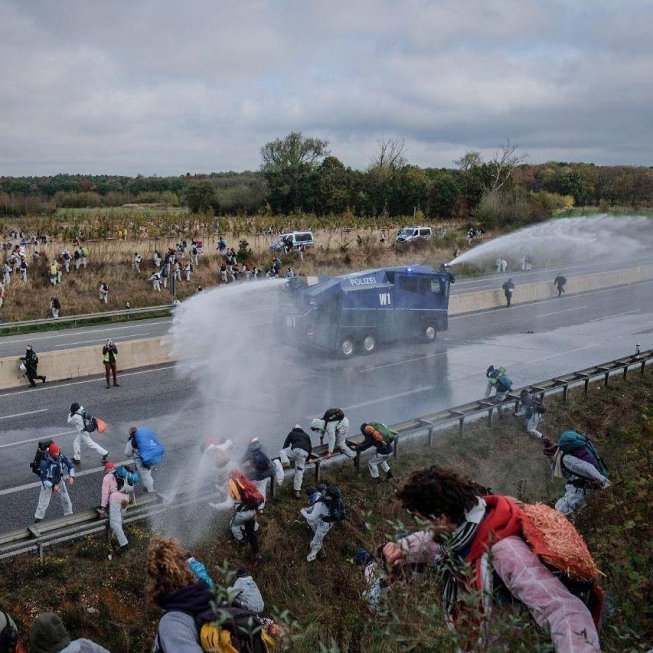 A large strip mine for lignite coal is located in the Hambach Forest in western Germany. The forest is 12,000 years old and the last primary forest in Central Europe. Since the beginning of the 19th century, its area has shrunk from more than 10,000 hectares to just 220 hectares today.

Now the power company Rheinisch-Westfälisches Elektrizitätswerk AG (RWE) plans to destroy even more of the forest, reducing its size to just 80 hectares. This decision is part of a project to produce more lignite coal, a particularly inefficient and dirty form of coal mined in open pits. This region, with three mines and three power plants, is one of the largest sources of CO2 in Europe. Today, 37 percent of Germany’s electricity is produced by coal.

Internationally, Germany appears to be a promoter of strict rules to stop climate change, but the reality is different: Germany will not achieve its climate goals and has no intention of doing so as long as its companies remain profitable. In 2017, RWE made a profit of 2.7 billion euros while destroying the planet – a precious sum for the bourgeoisie. However, both the government’s and RWE’s disregard for the climate crisis has not gone uncontested.

The Hambach Forest, called “Hambi,” has been occupied for more than six years by activists who live in trees year-round. They get support from the surrounding communities, entire towns which have been swallowed up by the mine. These activists hold out despite police repression, including the death of journalist Steffen Horst Meyn, who fell to his death during a violent evacuation.

Since 2015, “Ende Gelände” has organized actions to stop coal power and has grown to be one of the largest movements against climate change in the world.

Last weekend, 6,500 activists from across Europe gathered around the city of Düren, next to the Hambach Forest, for a weekend of action against RWE. On Saturday, they divided into five different “fingers” (Gold, Silver, Orange, Pink and Red) in order to overwhelm police – each finger had a different route towards the mine.

By 8am, a handful of activists managed to occupy the first massive excavator. The entire Orange finger was surrounded by police, and 1,000 activists in white overalls were forced onto dozens of buses in order to be identified by police. While the police rounded them up, the other fingers kept moving, and were soon able to block the rail lines that connect the mine to nearby power plants.

By 1pm, 2,000 people were sitting down on the rails. The occupation lasted for 24 hours, while police tried to convince people to leave voluntarily. Most of the blockades were lifted at noon the next day, as had been planned, but about 200 activists remained, chaining themselves to the rails before being removed by police.

While the action organized by the protestors was non-violent, the same cannot be said of the response by mounted police and officers with water cannons – they performed their roles as the defenders of capital.

Despite the coordinated efforts of the activists, however, the effects of the blockades were limited, since the power company maintains a reserve power supply to keep the plant running for more than three days.

The action by “Ende Gelände” can be classified as part of the “New Social Movements” (NSM) that emerged in Western countries in the 1960s. These are characterized by their rupture with traditional forms of social conflict based on political parties and trade unions. NSMs are based on the assumption that everyone’s most basic needs have been met, so activists need only fight for specific causes such as ecology, feminism, LGBT rights, etc.

NSMs favor decentralized structures and are wary of ideological discourses, such as the “class struggle.” They prioritize temporary objectives like a 24-hour blockade of rail lines. They forget, however, that companies like RWE employ 60,000 workers who, if sufficiently organized, could take control of the company and manage it democratically – preserving jobs, reducing working hours, redistributing profits, turning to cleaner energy and planning production according to society’s needs.

Such proposals might seem like distant possibilities, but they are the only conceivable solution to the climate crisis. In contrast, the concept of “green capitalism” and “climate justice,” within a system based on the exploitation of people and resources in the name of short-term profits, are completely unrealistic.

On October 25, the trade union IG BCE (which organizes the energy, chemical and mining sectors) organized a demonstration of 30,000 people against an end to coal mining. Speakers included the politicians Armin Laschet (CDU, from North Rhine Westphalia) and Mathias Platzeck (SPD, from Brandenburg), both strong supporters of lignite coal. The IG BCE forms the right wing of the trade unions in Germany, and is particularly close to the capitalists. This is not the first time they have organized demonstrations together with bosses in defense of jobs and against climate change initiatives. Some union members, like those from the service sector union ver.di, are trying to pull the other way, but they remain in the minority.

There is a widening gap between workers who want to defend their jobs on the one hand and the environmental movement and anti-capitalist left on the other. This is a result of the nationalist and pro-business policies of the IG BCE, which is not prepared to question the logic of capitalist profits. The union could fight for its members’ jobs by campaigning to reduce working hours and place the companies under workers’ control, but it does not. Furthermore, the environmental movement largely ignores the social interests of the miners, who fear lifelong unemployment and poverty. Some environmental activists consider workers enemies – this leads to a vicious cycle that reinforces the miners’ identification with their exploiters and their corrupt union bureaucrats. 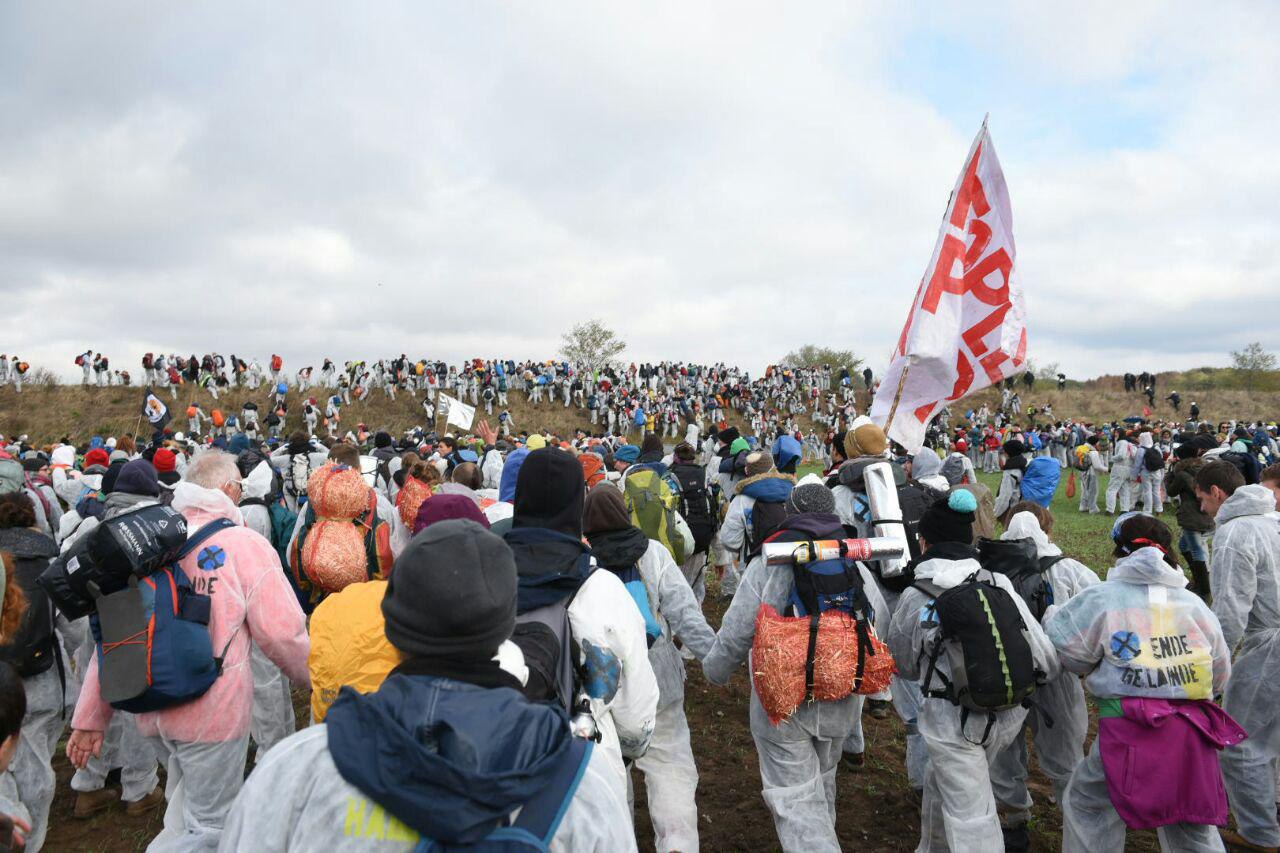 The anticapitalist and revolutionary left needs to fight to win RWE workers for a common struggle by offering a program to guarantee jobs while rapidly transitioning away from fossil fuels. Only a handful of activists intervened at the IG BCE demonstration. Had hundreds or thousands discussed with RWE workers, consciousness could already be very different amongst the workers’ movement.

There is no time left to waste in the face of a deepening climate emergency. It is not enough to block RWE’s rails and machines once a year. We need to build up a mass revolutionary party that will get workers to seize the means of productions themselves.