Over 15,000 Gather in Brooklyn to Declare that Black Trans Lives Matter

Over 15,000 protesters took the streets in Brooklyn on Sunday in solidarity with trans* Black victims of state and transphobic violence. 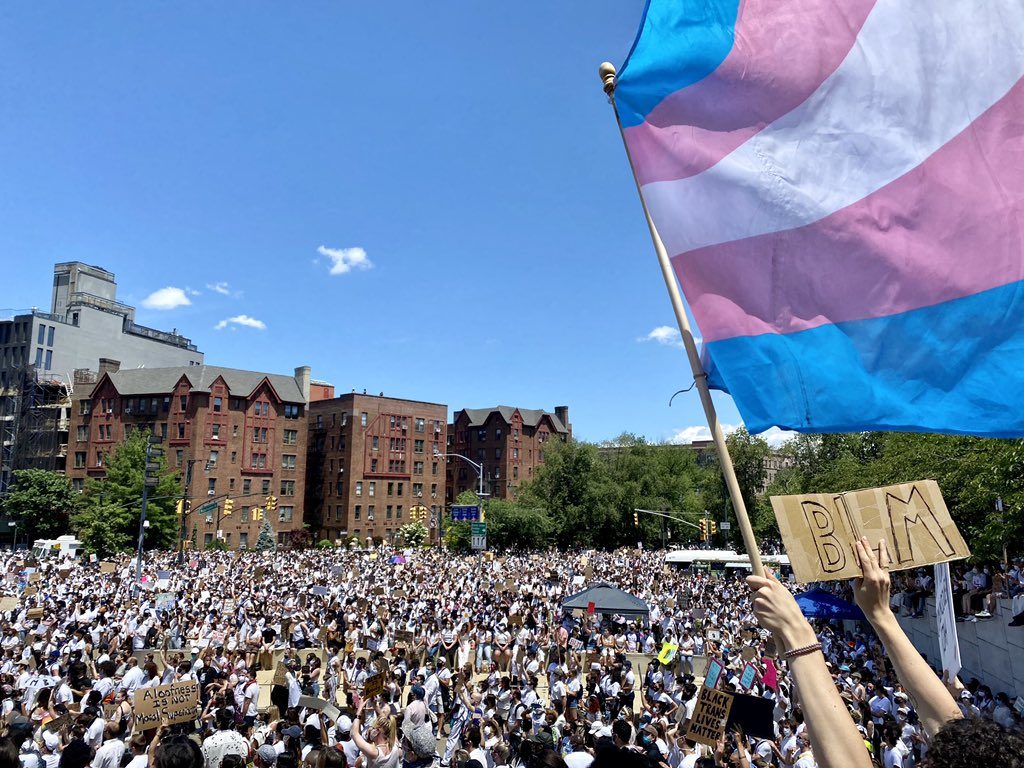 A sea of people, all dressed in white, stood looking up at the front of the Brooklyn Museum, where a collection of trans* Black activists stood, addressing the crowd. A police helicopter hovered ominously over the crowd while drones zipped in and out of the assembled bodies. Despite these very obvious intimidation tactics, the thousands in the street were in good spirits. There was a rage that united everyone, a rage at the murder of two Black trans* women, Riah Milton and Dominique “Rem’mie” Fells, in the past two days, a rage at Donald Trump’s rolling back of healthcare protections for trans* individuals, a rage at the historic and current oppression of the Black trans* community, an oppression that still persists 51 years after a Black trans woman started the Stonewall Riots in protest of state violence against the trans* community.

This was the scene on Saturday at the Brooklyn protest for Black Trans* Lives. The protest was called earlier in the week and received a lot of attention on social media. Organizers called for everyone to wear white, listen to the speakers, and then participate in a silent march. The effect was very powerful as, what organizers estimate to be around, 15,000 people showed up to stand in solidarity with Black trans* people. This was one of the largest Black Lives Matter protests in the past few weeks.

In Brooklyn, one of the first speeches of the event, Black and non-binary performer and activist Ianne Fields Stewart, the founder of the Okra Project, declared that transphobia would not be solved by “putting a trans* flag on a credit card.” This proclamation was in keeping with an anti-corporate spirit of the day. Gone were the corporate sponsorships, endorsements, celebrities, and brand integration that have come to define Pride Parades. Instead, speaker after speaker condemned both companies and and NGOs who try to profit off of trans* lives. Gone too was the notion of the “friendly” cops invited to Pride™, the increasingly corporate spoonsored Pride parade. The crowd was united in opposing the police, prisons, and their continual violence against the Black, Queer, and gender non-confirming communities.

“As a healthcare worker, other healthcare workers need to rise up and say Black trans lives matter.” Mike Pappas, a physician and member of Left Voice speaks out against Trump’s attacks on trans people’s healthcare.#blacktranslivesmatters #BlackLivesMatter #PrideMonth #Pride pic.twitter.com/Ok2BnQPE8s

The final speech of the day came from the sister of Layleen Xtravaganza Cubilette-Polanco, a trans* woman of color who died in solitary confinement at Rikers. She was being held awaiting cash bail after being arrested for a years-old prostitution charge and died of a seizure. Videos show the prison guards not taking her seriously and leaving her lying in the cell for an extended period of time without helping her.

Cubilette-Polanco’s sister delivered a powerful condemnation of the system that killed her sister. In the conclusion of her speech, she declared “when they knock one of us down, we come strong” and “every time we step, let the floors shake.” Cheers and chants of solidarity echoed through the crowd. The crowd stood in solidarity with Cubilette-Polanco, Nina Pop, Tony McDade, Riah Milton, Dominique “Rem’Mie” Fells, and all Black trans* people who have been murdered.

Every year during Pride month Marsha P Johnson, the Black trans* woman who started the Stonewall Riots, is remembered. Her image becomes ever-present for the month of June as radicals and liberals alike uphold her as an icon. But, as a speaker pointed out at the rally, we still don’t know how she died. Johnson’s death, like the deaths of so many members of the Black trans* community, went uninvestigated, unremarked upon, and unknown. The action in Brooklyn yesterday, like the actions around the country for Black trans* lives, represent an important step towards honoring all the named and unnamed trans* people of color who have lost their lives to state violence, racist violence and transphobia. It is through uniting the struggles for Black liberation with queer liberation and the overall fight against capitalism that we will be able to build a movement capable of taking on this evil and violent system.

Trans*, with the asterix, represents a wide and diverse spectrum of non-cisgendered individuals including non-binary, gender fluid, and agender individuals