Thousands in NYC Face Off Against Police Amid Extreme Repression

New York City streets filled with protesters in protective masks on Friday as thousands of people demanded justice for the police killings of George Floyd, Breonna Taylor, Sean Reed, and Tony McDade, as well as the white vigilante killing of Ahmaud Arbery. They confronted New York City’s police who responded with brutal repression, including pepper spray, billy clubs, and hundreds of arrests. 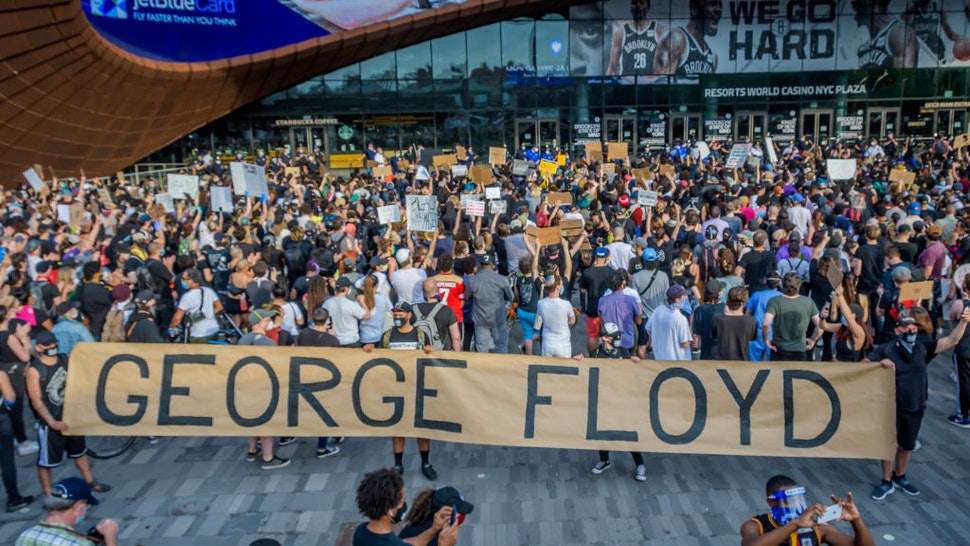 Though New York City’s recent protests against police brutality have received widespread attention from major news outlets and politicians, the full extent of the violence and arrests carried out by NYPD has been consistently understated. Mayor Bill de Blasio is calling for people to stay home and for “peace” to be restored, but his promises to hold NYPD responsible for its racist violence ring hollow. We cannot trust politicians to “police the police” that enforce the laws of the racist system these very politicians lead. As protests continue across the country, we must demand the release of all those jailed in the fight for justice for victims of state violence.

With more mobilizations planned for the coming days, it is clear that the workers and oppressed people of New York City are full of rage at a system that devalues the lives of Black people and kills them with impunity. Though protests began late Thursday night, demonstrations escalated on Friday, resulting in violent clashes with police and mass arrests. New Yorkers are demanding justice and they have no intention of backing down. Here is a rundown of the actions across New York City on Friday night.

Friday’s protests began in Foley Square, where over 1,000 people gathered with flowers, signs, and speeches denouncing not only the unjust killing of George Floyd, but the countless instances of racist police violence perpetrated by the New York City police department over the years. Several speeches connected the current escalation of police brutality across the nation to the murder of Eric Garner by the NYPD in 2014, making explicit what countless people of color already know to be true: the racist police system is not afflicted with a few bad cops — the police force has never had respect for Black lives.

A contingent of people who gathered earlier in the afternoon attempted to block the surrounding roads and were quickly tackled by the police and dozens were arrested. As the protest grew, chants denouncing George Floyd’s murder sounded across the square and people spilled out onto the streets, disrupting traffic. The crowd then marched to a court building and a nearby detention center, where they faced off with police. Several arrests were made by plainclothes police officers posing as demonstrators before surrounding and violently tackling protesters. Split by police barricades and riot cops shoving protesters apart, the march split into several contingents which spread across Lower Manhattan, including to the Brooklyn Bridge.

Over 2,000 people filled the square in front of Barclays Center in Brooklyn and the surrounding blocks for over three hours. Protesters arrived to find lines of riot cops — many of them without protective masks — waiting behind barricades in front of the subway. As people joined the protests, cheers of “Say his name,” “Hands Up Don’t Shoot,” and “How do you spell racist? NYPD!” reverberated throughout the plaza. Protesters held flowers and signs painted with the faces of Breonna Taylor, George Floyd, Ahmaud Arbery, Sean Reed, and Tony McDade.

As cops shoved protesters, demonstrators sprayed water at the police and threw bottles. The police responded immediately by shooting pepper spray at protesters point blank. Fireworks went off in the street and protesters defended themselves from cops who reached into the crowd to make arrests.

Make no mistake: on the orders of Mayor Bill de Blasio, NYPD was out in full force with the sole intention of repressing the protests and controlling the rage of the thousands on the streets demanding justice. The police met the demonstrators’ anger with ten times the violence of any individual protester, tackling individuals to the ground in groups of four or more. We must demand the immediate release of all arrested demonstrators and the dropping of all charges against them, including those laid against Samantha Shader, who is faced with federal charges for allegedly throwing a molotov cocktail at a police van.

Later in the night, MTA buses showed up to transport detainees to jail. But as the cops loaded protesters onto the bus, in a crucial act of solidarity, New York City bus drivers refused to move the buses, saying they would not participate in the police’s repression of protesters and would not be complicit in police murder of Black people. The surrounding crowd went wild, cheering on the bus drivers and their unity with the mobilizations. Later, the Transit Workers Local 100 union tweeted out a statement saying that all their members would refuse to transport arrested protesters.

After the protest in Barclays Center was split up by the police, groups of protesters split off and proceeded to different locations. About two hundred people gathered in front of Fort Greene Park where they faced off in front of hoards of police taunting protesters with pepper spray. Demonstrators chanted: “George Floyd!” and the more joking but welcome, “NYPD, Suck My Dick!”

Quickly, the tension escalated and protesters flung rocks, balloons filled with paint, and plastic and glass bottles at the crowds of police officers. The police were soon forced to retreat, and the police vans on the scene began to drive through the swarms of protesters who blocked their path. Protesters held their hands in the air, shouting “Hands up, don’t shoot!” Police responded by violenting pushing protesters back, shoving many of them to the ground as the vans drove through the crowd.

After the police broke through the line of protesters, protesters turned their rage onto an abandoned police car, smashing the windows and setting it on fire. As the van burned, protesters set up barricades in the street.

Just outside of the park another group of protesters held off lines of police officers in riot gear, holding intersections against them and guarding the Fort Greene action.

Precincts all over Brooklyn were overrun by protestors, demanding justice for all the Black and Brown members of the community that were murdered at the hands of the NYPD. The 88th Precinct was so overrun by protesters that the Police Commissioner, Dermot Shea, called in a level 3 mobilization, an action requiring all special units to respond. Protesters lit an empty police van on fire and blocked responder vehicles from entering the space.

In the 79th Precinct, some protesters managed to break in, but were swiftly arrested. The 84th Precinct in Bed Stuy was also full of protesters swarming the police. Protests outside became violent, as officers used brute force and night sticks to beat protesters. Later in the night, the police blocked groups of supporters from entering the precincts for jail support.

Other precincts across the city were swarmed by protesters demanding justice for the victims of not only NYPD, but the entire racist policing system.

Justice for George Floyd and All Victims of State Violence

George Floyd’s murder was a powderkeg moment, one that ignited building tensions surrounding a racist and violent police system that has killed Black people without fear of retaliation for too long. The sense of urgency is palpable. While the protests started in Minneapolis, bigger and bigger crowds are showing up in almost every major U.S. city showing solidarity against police brutality. Each of these cities has their own memories of members of their community, killed too soon by the police. “I can’t breathe” was the slogan Black Lives Matter took on when Eric Garner was killed by the NYPD almost six years ago. Six years later, we scream that chant again in the streets, this time for George Floyd, another Black man murdered by a racist institution, and for all victims of police brutality. There is no hope in allowing this corrupt organization to “police itself.” The community has tried taking a knee and nothing happened. Now we take the streets.